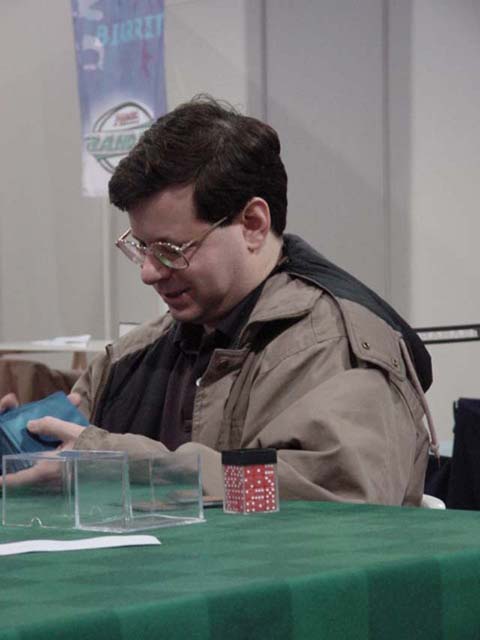 Pustilnik is just fresh off his Pro Tour Los Angeles victory, which placed him at the very top of the Pro Tour player of the year standings, but his second day at Valencia didn't start off so perfectly. He had some problems during the draft and he was not very happy with his deck. Alejandro also complained, as usual, about his deck.

Both players where very friendly and despite the language barriers spend a few minutes after the round talking about their decks and discussing the draft they had been in.

Mike kicked off with a Thunderscape Apprentice and a Ravenous Rats (which were not the best Rats ever, nabbing only a Thunderscape Familiar). Alejandro dropped a Shivan Zombie and a Kavu Aggressor (no kicker) to start the game.

The creatures kept piling in as Dominguez added a Phyrexian Slayer and a Viashino Grappler to the mix. Both players kept trading furious blows while Alejandro softly sang (yes, he sang... and very badly to tell the honest truth... sorry Alejandro, but don't give up your day job) for more mana. The Runner and the Grappler traded in combat and Alejandro used a Tsabo's Decree, naming Kavu, to show us all the trouble Mike was in: he had only lands in his hand.

The lone Apprentice could not possibly stop the Spanish horde and Mike failed to draw any saving spells.

Mike opened up with a quick duo: Thunderscape Apprentice and Viashino Grappler but Alejandro also found a Grappler. The Grapplers traded in combat and Mike played a Rat (nabbing only a Mountain). Two Kavus then entered play, Mike's Kavu Runner and Dominguez's Mire Kavu. They didn't really like each other so they crashed in combat right away.

Alejandro played a Hunting Kavu, which got annihilated, and then a Caldera Kavu, which was brought down by a Terminate. Mike's rat got a Sinister Strength and Alejandro would have been in big trouble if he hadn't the Assault/Battery.

Mike then played a pumpable menace: Caldera Kavu. The pumping on the Caldera Kavu meant Dominguez had to find a good answer and he had to find it soon. He used a Zap to kill the Apprentice, looking for the answer, but was very unhappy with what he drew... or maybe just with the two swamps he tapped to cast the Zap. After playing his Nightscape Apprentice he had no black mana to regenerate it. Mike had a Magma Burst to remove the blocker and put the Spanish within striking distance of the Caldera Kavu.

Mike again played first turn Thunderscape Apprentice and second turn Rat (getting a Mourning this time). Alejandro then played a Kavu Aggressor (no kicker). Pustilnik is just so fond of Ravenous Rats that he played a second Rat (getting a Tsabo's Decree this time) and a Scared Puma. 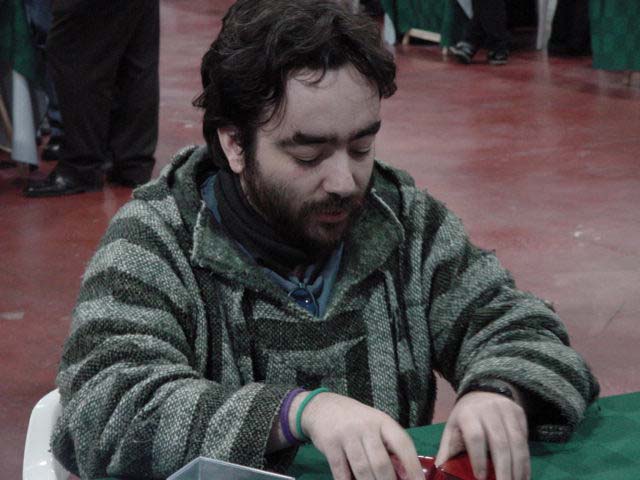 That innocent Puma killed the Aggressor because Alejandro misread it and thought it was safe to attack. Alejandro bounced slightly back by using a Zap to get rid of the Apprentice. When he forgot to draw the cantrip card Mike warned him about it to which Alejandro simply answered "I don't think it will make the difference" with a sad smile. Pustilnik then played a Viashino Grappler.

Alejandro got a 3/3 token out of his Assault/Battery and let the Grappler pass to keep the Rats at bay. Good call, because Mike then played a Morgue Toad. The Spanish defense got bigger with a Caldera Kavu and he used a Scorching Lava to get rid of the Grappler when Mike sent it in again. The American thought long and hard and decided to use a Recover to get the Grappler back.

Dominguez attacked with the token and Mike gangblocked with the two rats and the toad (losing a rat and the toad). The Grappler came back into the game the next turn and didn't wait long to resume his wild attacks. Mike also played a Kavu Scout and Alejandro got a huge Mire Kavu.

If you are impressed with Mike's game so far you will more impressed as soon as you discover that he was working only with three lands. Mike had to play a Sinister Strength on his Rats to force the Mire Kavu to block right away. He then drew his fourth land, a Urborg Volcano. Alejandro played a Hunting Kavu but the end was near. With his fourth land finally available, Mike simply used a Magma Burst to finish the game and the round.