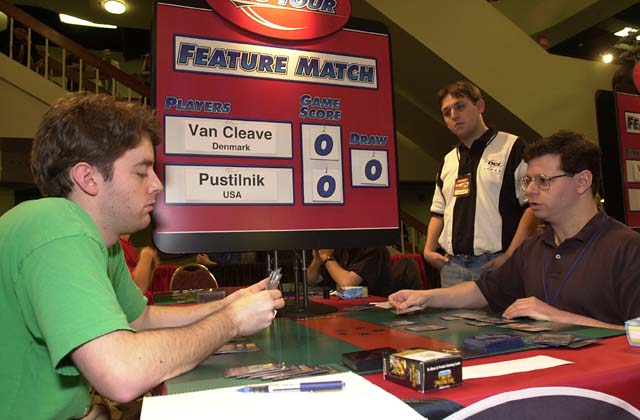 After a brief tour through the haunted bowels of the Queen Mary, where many strange noises were heard and sites were seen (and scents were smelled... eeewww...), I sat down to cover these fine individuals. On the resume of Trey Van Cleave, we have two Grand Prix wins: San Francisco and Philadelphia. Mikey P won Grand Prix Memphis, and top eighted at the recent Pro Tour Chicago. Both players have done consistently well on the Pro circuit, and it will be interesting to see which has the better Blue-White-Black deck, as both drafted these colors at their table.

Trey won the die roll and took the option to play first. Mikey P broke onto the board first with a second turn Vodalian Zombie, and Trey cast a Tower Drake for his side of the board. Both players took an offensive position, until Mikey P got up to 4 mana. He Cursed Fleshed the Drake, and left three mana open. Mikey P went on to exclude Trey's Samite Archer, exclude Trey's Glimmering Angel, Exotic Curse Trey's second Samite Archer, and then Undermine Trey's Dromar. Trey conceded when Mikey P cast Probe with kicker, denying Mike a look at his hand. 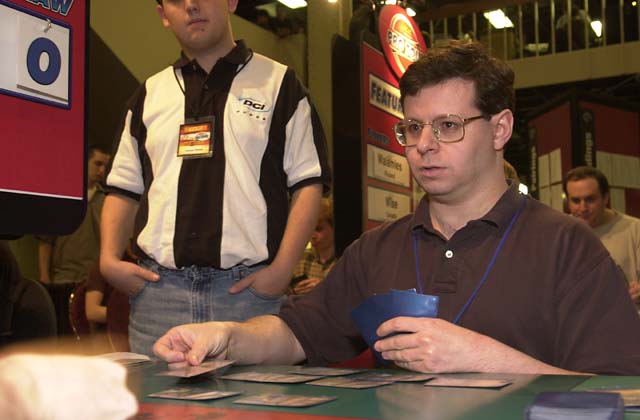 Trey decided to play first again for the second game, and this game lasted about 30 minutes all by itself. A major highlight to this game was an Infiltrator trick on Mikey P's part. Mike got up to nine mana, four of which was blue, so he could essentially steal Trey's men. When Trey attacked with a kicked Faerie Squadron, Mikey P blocked with a Metathran Aerostat, put damage on the stack, then added to the stack:

last thing on the stack resolved first, then the first thing, so what would have ended up happening is Mikey P would have control of the Infiltrator AND the Faerie Squadron, and the Aerostat would end up in the graveyard from combat damage. To stop this from happening, Trey sacrificed his Angelic Shield to return his Faeries to his hand. Trey had also gotten enough damage through already, that all he had to do was sit back and ping Mikey P with his two Samite Archers until the game was over. 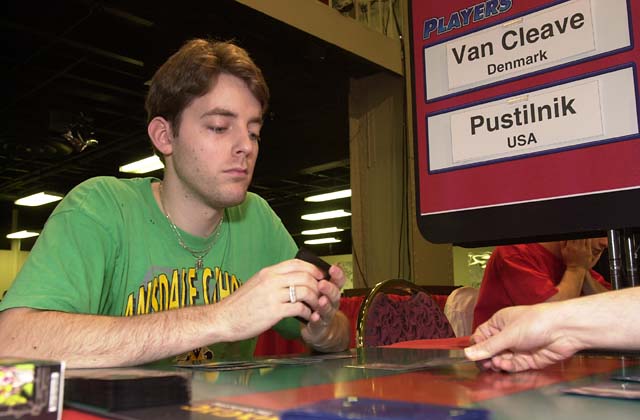 Game three Mikey P went first, putting him at a huge advantage with his two drops to put pressure on Trey and Counter Magic to stop Trey from being able to do anything useful. True to form, Mikey P dropped second turn Hate Weaver, and Excluded Trey's first attempt at making a Samite Archer. Mikey P Undermined a Tower Drake, Exotic Cursed an Archer, and cast his own Tower Drake and Kicked Dusk Walker, effectively overrunning Trey's defenses and winning the match.