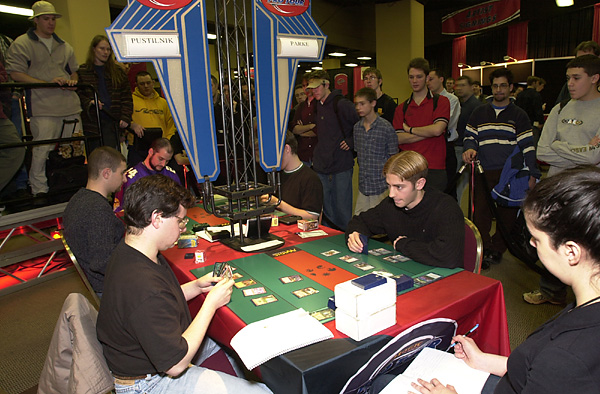 Round 10 featured a battle between two Americans, both with 8-1 records and both from New York State. Mike Pustilnik is a PhD Chemist from Brooklyn who has left behind a career in the lab for one on the Pro Tour. Jamie Parke is a freshman at the University of Rochester studying to become an Optical Engineer. Both players already know the matchup before the first land is played. "It's Fires vs. Blue Skies," Pustilnik said as they entered the feature match area. Playing first is a huge advantage in a match between aggressive decks like these, and these players know it. Pustilnik won the die roll, prompting Parke to sigh "that sucks."

Pustilnik may have won the roll, but it didn't grant him the tempo he'd hoped for in the start of Game 1. His first two lands both came into play tapped, and he was unable to cast anything before a turn three Fires of Yavimaya. Parke, meanwhile, had a near-perfect tempo draw, casting a turn two Spiketail Hatchling, a turn three Ribbon Snake, and a turn four Troublesome Spirit. Pustilnik was unable to make up for his lack of early momentum, and by the time he was ready to cast his big threats like Blastoderm and Kavu Titan, the freshman from Rochester was ready with permission. 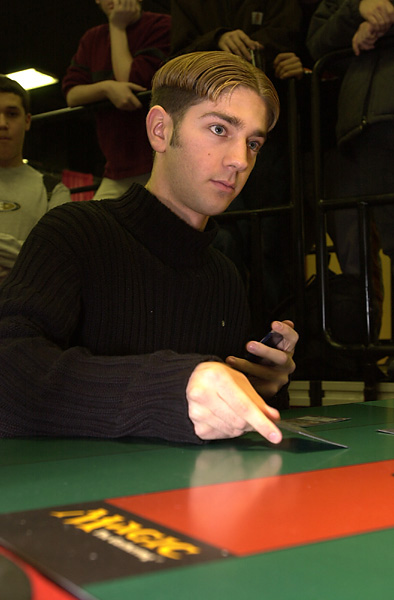 Both players showed me their sideboards, and both had cards that could be devastating in the right situation. Pustilnik took out his Earthquakes, Aura Mutations, and a Saproling Burst for Boils and Simoons. Simoon is a somewhat unusual choice for this tournament, but looks ingenious in this matchup. Parke had his own answers, taking out Gush and some permission for Submerge and the very powerful Wash Out.

Game 2 Pustilnik played first again, but this time had better tempo, opening with a first turn Bird and a second turn Chimeric Idol. Parke took a mulligan and had a weak start, casting only a Cloud Sprite in the first three turns. The lone Idol appeared to be Pustilnik's only gas. He tried to cast Boil, but Parke Countered. Parke was able to take advantage of the lull in Pustilnik's tempo by casting and attacking with a Troublesome Spirit for several turns, then returning the first Saproling Burst to Pustilnik's hand with Wash Out. However, Parke was unable to Counter the Burst on the following turn, and Pustilnik narrowly won the race. 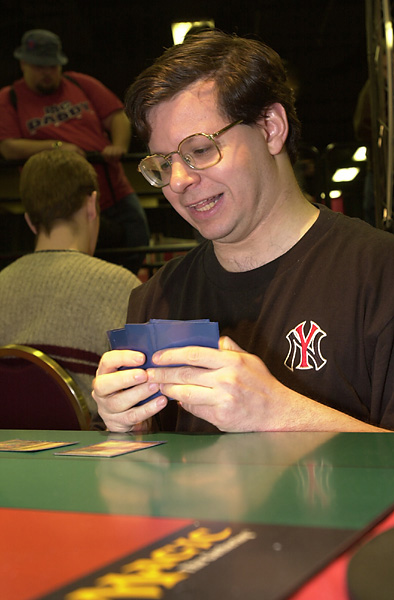 Although Parke played first this game, the combination of a poor creature draw and mana stall prevented him from ever having a real chance. Things were made even worse when Parke's only creatures, two Cloud Sprites and a Spiketail Hatchling, were all taken out in an untimely Simoon. Pustilnik attacked relentlessly with two River Boas, and eventually a Kavu Titan, all with a Fires of Yavimaya in play. Parke Dazed Pustilnik's Saproling Burst, but it didn't matter. He died to an onslaught of green creatures, all the while with three land in play and two Wash Outs in hand.