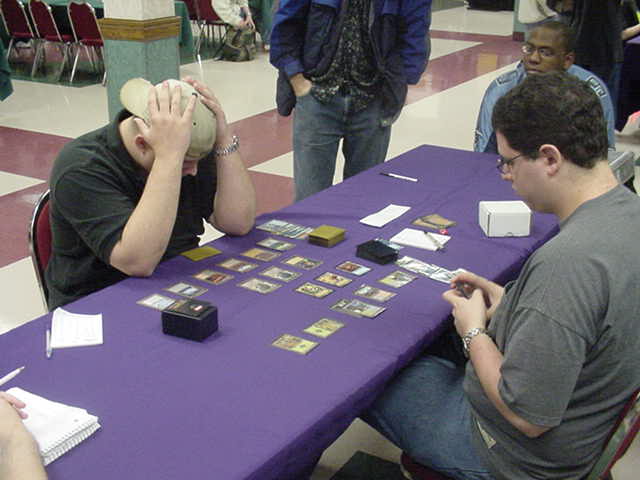 The centerpieces of two respective Magic Online teams squared off this round (Mike from Team CMU and Neil from the board-leading Southeast Locals), each having fought to a 7-2-1 record. Both players were in joking moods, as evidenced by the first exchange after they sat down:

Neil: You hate me.
Mike: I don't hate you.
Neil: But you've said it four times!
Mike: But I didn't really mean it.

At the next table, the other feature match had gathered quite a crowd. Our table didn't seem to have as many spectators initially. Pro Tour player and spades afficianado Matt Linde wandered over just as the game began.

Matt: Your crowd is just me and Bleiweiss.
Neil: That's because we're a has-been and a never-will-be.
Mike: Last time someone called me a has-been, I won the Pro Tour. 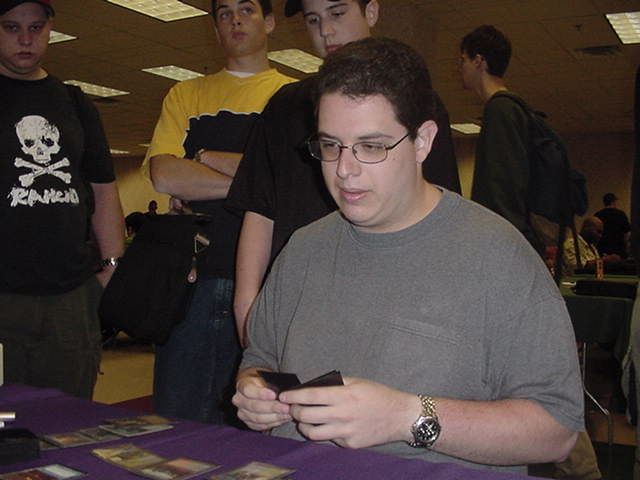 Mike won the die roll, and chose to play first. Mike also chose to mulligan first, keeping a slow hand with lands and high casting cost spells. Neil stayed with a risky hand, playing two pain lands and a Crosis's Catacombs by turn three. "This is going to be really embarrassing", Neil proclaimed, returning a land to his hand to play the dragon's lair. The Potato threw some steam in the pressure cooker with a Call of the Herd and Squirrel Nest.

Finally, NeilR began drawing more consistent lands, sowing an Island, Underground River, Shivan Reef and Shadowblood Ridge in successive turns. These were used to bring out a Nightscape Familiar, a Psychatog and to Repulse the token elephant out of the game. Spurred on by the toothsome visage of everyone's favorite 1/2 creature, Neil sang this song:

"I love cookie.
Cookie is for me."
-Neil Reeves, GP Milwaukee 2002. Turn Five, Round Ten. All rights reserved. TM.

Although he tapped down to a single open mana in order to drop these spells, Mike failed to capitalize. His fifth turn Opposition met with a Force Spike (Mike stalled on four lands), and the game went downhill very quickly from there. Neil kept chanting his battle cry.

The CMU player kept trying to stay in the game, but each of his spells was dealt with, starting with a Merfolk Looter (counterspelled), then his hand (Probe), and lastly a second Call of the Herd (countered). Eventually Neil dropped a second Psychatog, and cleared away all the squirrels over the course of a few turns for the win. 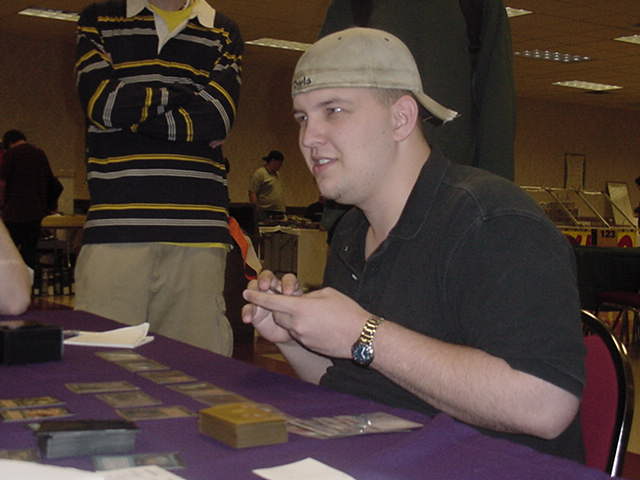 Neil: You're lucky I'm not a judge, you'd get a warning for being so ugly.
Mike: You mean sexy.
Neil: That was the next thing I was going to say.

The game was even less close this time. No matter what Mike would play, Neil had an answer. An early Wild Mongrel was Repulsed and then FTKed. A Merfolk Looter was FTKed. Birds of Paradise were FTKed. The only non-land permanent Mike could keep in play was a Squirrel Nest, and Neil simply kept swinging with his army of 4/2 creatures backed with a Nightscape Familiar. A Probe stripped Mike's hand of all spells, and the game ended quickly and brutally on turn nine, after Turian drew consecutive Birds of Paradise to lose the game.