Round 10 Feature Match: Racing the Pack

Coming into the tenth round we have Josh Utter-Leyton going up against Gaudenis Vidugiris. Each player has three losses, and will be keen to come out of the draft rounds without further loss to be in good shape in the run to Top 8. Vidugiris got his first Pro Tour Top 8 last year in Nagoya, while Utter-Leyton has a couple, including a second place last year in Philadelphia, where his Zoo deck lost to eventual winner Samuele Estratti. 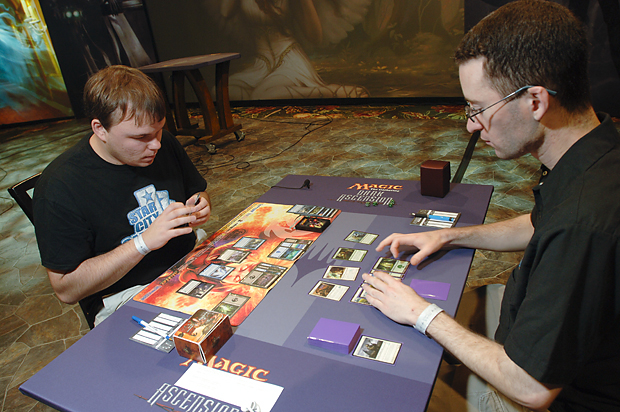 Both players have powerful decks in their respective colors. Who will come out on top?

Utter-Leyton, the ChannelFireball pro, had to take a couple of mulligans before the match could kick off, which would sting all the more for his having won the die roll and elected to play. Mana proved not to be an issue though, as he was quick to play a Loyal Cathar, and follow it up with Voiceless Spirit before Vidugiris had played a single spell with his blue-black deck. A Somberwald Dryad came next from Utter-Leyton, who nodded as Vidugiris cast a Forbidden Alchemy at the end of turn. Divination, Swamp and Skaab Goliath hit the bin, leaving Vidugiris to untap into a Stormbound Geist.

With the Geist on the board, Utter-Leyton's Voiceless Spirit effectively had less evasion than any of the rest of his team, and stayed back where his other creatures ran in. Vidugiris was soon at 10, and played a Morkrut Banshee without morbid simply to place a body back to block. An Avacynian Priest from Utter-Leyton was met with Bone to Ash, and Vidugiris began to sculpt a board position for himself, not attacking but building up his force with a Moon Heron. Utter-Leyton was now unable to profitably attack, and contented himself with a Lumberknot.

Typhoid Rats from Vidugiris looked like a solid road block, but Utter-Leyton was ready to power past them, casting a Feed the Pack that promised to create a lot of tokens, given appropriate time. Time was not something that Vidugiris intended to give. Loyal Cathar turned into tokens, and that provided a good time for Vidugiris to use Cackling Counterpart on Morkrut Banshee, allowing Morbid to kill off Voiceless Spirit. Next up a Griptide further emptied Utter-Leyton's side of the board, and allowed for some big attacks. Vidugiris cast a Delver of Secrets after the swing, and passed with enough mana up for another Cackling Counterpart could come along.

By now, Lumberknot was a hefty 8/8, offering plenty of food for the pack. Vidugiris repeated his Cackling Counterpart trick to off the Somberwald Dryad that Utter-Leyton had replayed. The life totals were 11 to 6 in Vidugiris' favor after Moon Heron and Stormbound Geist crashed in, and Utter-Leyton was suddenly on the back foot in spite of all his wolves. 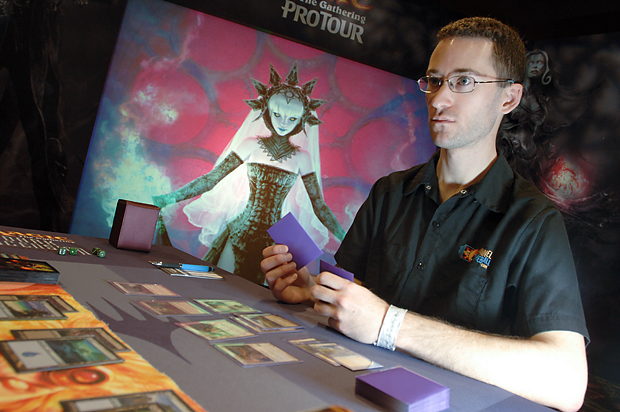 Utter-Leyton stares down his opponent in an epic first game.

After a little thought, Utter-Leyton swung with five wolves, holding two back. The life totals became 6 each, and Vidugiris was given pause to think up what his opponent's last card could possibly be, that he would play in such a fashion. Vidugiris flashed back Forbidden Alchemy, attacked for 2, being one point short of a lethal air attack. He took Utter-Leyton to 4, and cast Ludevic's Test Subject.

Utter-Leyton drew and passed, chuckling as Vidugiris had just enough mana to convert his flip card in just one turn. He had nothing in hand, and scooped up his cards.

Utter-Leyton was on the play for the second game, and this time started with a full grip, leading off with Champion of the Parish, and following up with Executioner's Hood, which would likely be serious business against the blue-black blockers of Vidugiris. While Utter-Leyton hadn't seen a colorless blocker in the first game, there was one in Vidugiris' deck, and it showed up on turn three: a Warden of the Wall. Loyal Cathar came down for Utter-Leyton, pumping Champion of the Parish, who continued to beat.

A Moon Heron came from Vidugiris, who took 4 on attacks on his following turn, going to 12. He nodded sagely as a Chapel Geist came from Utter-Leyton. A Curse of Death's Hold from Vidugiris seriously hampered the damage dealing potential that the ChannelFireballer could hope to meet out. This didn't discourage him from getting in some damage where he could though. Utter-Leyton came in with the team, and had an Urgent Exorcism on Curse of Death's Hold after blockers had been declared. He rounded things out with an Ambush Viper, looking to be in command of the game.

One-Eyed Scarecrow from Vidugiris further invalidated the Executioner's Hood plan, and Utter Leyton cast Village Survivors to ensure that his Champion of the Parish would grow to 3/3, becoming big enough to profitably attack. The Champion and the Ambush Viper swung in, with the Champion getting hit by a double block. Before damage, Vidugiris cast a Forbidden Alchemy, but could do nothing to affect the combat itself. He dropped to 6, after which Utter-Leyton passed.

Vidugiris for his turn simply cast a Relentless Skaab, and had to look on as Utter-Leyton built up a force including a Voiceless Spirit, and his Village Survivors equipped with Executioner's Hood. Neither player had a great deal going on it seemed, which worked in Utter-Leyton's favor with a Voiceless Spirit very slowly plinking in. A Griptide on Village Survivors meant that it could not be any faster a clock, but Utter-Leyton didn't seem to be concerned with hurrying things along, as long as he got the win. 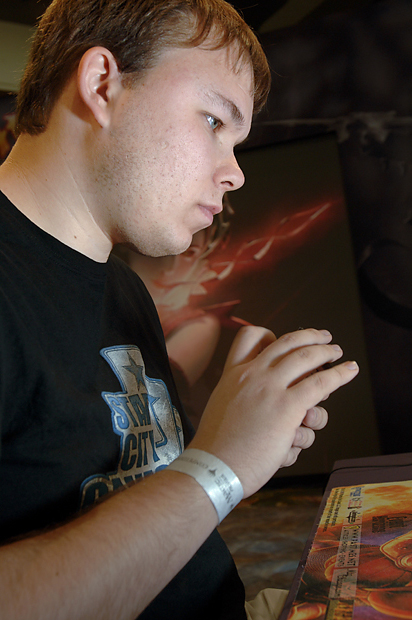 Vidugiris, deep in the tank, finds a way to slow Utter-Leyton down.

Cackling Counterpart flashed back on One-Eyed Scarecrow turned off Voiceless Spirit's attacking potential. Now Utter-Leyton would be back on the Village Survivors plan. They would gradually whittle down the Scarecrow as a blocker, at which point Vidugiris, clinging on to his final life point, would inevitably succumb.

Vidugiris could see the writing on the wall as well as anyone. He played a Stormbound Geist to mean that at least Voiceless Spirit wouldn't be able to get it done. He found a Victim of Night to kill off Village Survivors, and commenced digging with Forbidden Alchemy. When he didn't find anything, he scooped up his cards.

Both players kept for the rubber game, and Vidugiris was fast to fire out a Ludevic's Test Subject. He followed this up with One-Eyed Scarecrow, to form quite the back line. A Victim of Night killed off Thraben Doomsayer, and a Claustrophobia neutered a Kessig Recluse. Utter-Leyton had to get some kind of an offense going, as Ludevic's Test Subject was leveling up each turn. A Chapel Geist stuck, but it would do little with One-Eyed Scarecrow around. A Warden of the Wall was quickly hit by a Naturalize from Utter-Leyton, who also had an Avacynian Priest, just in time to help him against Ludevic's Abomination. Vidugiris was able to get one clean hit in with the 13/13 before losing it to Smite the Monstrous. Relentless Skaab came next from Vidugiris, who was taking tiny hits from Chapel Geist. These hits soon became larger, as Feed the Pack came down for Utter-Leyton, who had some ideal food in the form of his Kessig Recluse.

The board looked even, perhaps even ahead for Utter-Leyton, who used Urgent Exorcism on a Moon Heron from Vidugiris, but being on 7 life stung. He attacked Vidugiris down to 16, and at end of turn changed Chapel Geist into three more wolves. Vidugiris found removal for Avacynian Priest, meaning that his Relentless Skaab would be life. Utter-Leyton had Naturalize for One-Eyed Scarecrow though, clearing a path, and letting a pack of wolves race.

Vidugiris looked stunned. He had been in great shape, but the wolves had formed too large a pack for him to deal with. Vidugiris scooped up his cards.