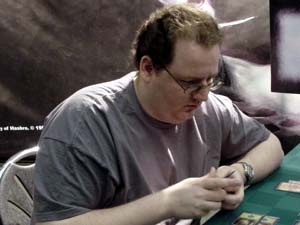 Kraft is a German player who's found success on the GP circuit in recent times, just missing out on taking the title back in Birmingham earlier this year. Bernardo da Costa Cabral is one of the host nation's finest and came close to a GP title himself before falling to the Juggernaut in Madrid at the start of the year.

I joined this game a few turns in. For a lot of games that might be too late but as Bernardo is one of the crazy few to try running blue-white control the game was actually just getting going. It didn't look to rosy for the Belgian player as Kraft's Elf and Nail deck had just bust out Vernal Bloom and had the Empath/Symbiote combo to fetch whatever fatty it wanted.

The first attempt was for a Darksteel Colossus, but Bernardo had a Discombobulate waiting for it. No real problem, Kraft could always fetch it out again next turn. Bernardo gave him other things to think about as he dropped a Mindslaver on the table. Artefacts don't have much of a life expectancy in standard at the moment and a Shaman smashed up the 'slaver. Kraft followed with Kamahl to discourage any thoughts of Wrathing the board.

Bernardo had a Damping Matrix, but it looked to only be around temporarily as the Symbiote sent the Shaman back in response while Kamahl obligingly made 4 of Bernado's lands creatures, just in case the Belgian had Wrath.

The Shaman returned to smashed the Matrix to pieces and then Kraft pondered his next move.

He summoned a Triskelion and looked to start shooting up Bernardo's land. An Echoing Truth in response to the land being made creatures meant the counters went to Bernado's head. This did tap the German out and left the way open for Bernardo to clear the board with Wrath.

He'd taken too much damage though and Kraft had a Tooth and Nail that dropped both Akroma and Triskelion into play to take the first game.

Unusually Da Costa Cabral didn't have to mulligan and was quite happy to expend a Mana Leak to prevent a second turn Wood Elves accelerating Kraft further. The Belgian clearly didn't like Wood Elves as a Discombobulate stopped another one a few turns later. This was clearly hurting the German player's mana development as he was pegged back on only two lands and a Bird of Paradise.

He tried thinning his deck out of the fatties with a Fierce Empath/Symbiote. Bernardo cycled a Renewed Faith and Eternal Dragon at end of turn and then did a very mean thing in his turn. He used Bribery to steal a Darksteel Colossus out of Kraft's deck. Small children everywhere shuddered with the horror of it.

Kraft didn't have an answer to his own Colossus and picked up his cards.

Game 3 and Kraft was able to get the amazing bouncing Wood Elves combo going. By the end of turn 4 he only had 7 forests in play. Next turn saw the Wood Elves fetch two more land. Only 10 forests in play. Bernardo's cycled Dragons just didn't seem to look in the same league.

A second Wood Elves appeared and it looked like Kraft wouldn't need to worry about drawing forests for the rest of the game. The clamp fed itself the extraneous elf.

Da Costa Cabral found a second island, but had no Bribery. Not that it mattered, Kraft had the Colossus and even after casting the enormous monster still had mana to replay some Wood Elves. 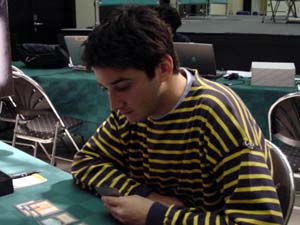 Unconcerned Bernardo cycled Decree for 3 soldiers and removed the Colossus from the game with a Duplicant. Sometimes indestructible just isn't quite enough. This did leave Bernado effectively tapped out. Kraft dropped a Vernal Bloom to double his already ludicrous mana and then cast an entwined Tooth and Nail to fetch Kamahl and a Triskelion. Three of Bernado's plains found themselves "up against the wall." A Viridian Shaman for the Duplicant topped off a fairly ridiculous turn.

Da Costa Cabral - "That was the wrong land to draw." He'd drawn Coastal Tower with only one plains in play.

Kraft - "I have another Tooth and Nail and an Akroma in hand. Do what you like."

Da Costa Cabral did, he extended his hand.