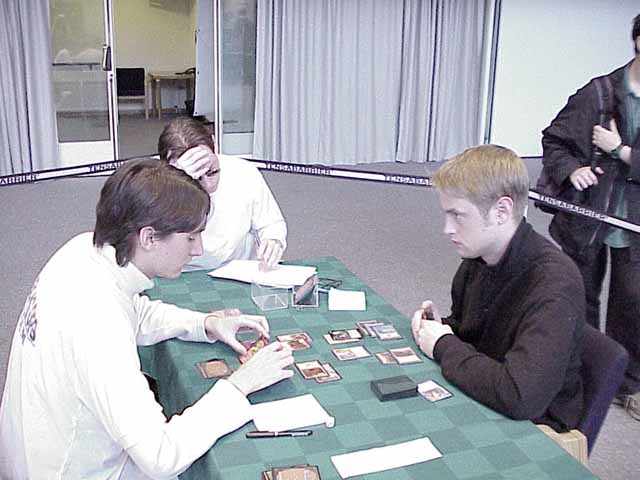 Round 10 and Swede Richard Österberg met Frenchman Florent Jeudon in a game that would decide Pod 4 and leave the winner with a strong chance of challenging for a top 8 position. Österberg was a semi-finalist in this year's European Championships and Jeudon is the third member of the highly successful Black Ops Team. Österberg played a white/blue deck while Jeudon had drafted a black/red deck around Kavu Monarch.

Game 1 was a game in name only. Jeudon laid two swamps, managed to cast a Hate Weaver and later some Ravenous Rats. His only other interaction in the game was discarding a Phyrexian Portal and then an Alloy Golem around turns 7 and 8 because he still hadn't drawn a third land.

In contrast, game 2 turned out to be a real thriller. Österberg made a Crimson Acolyte, a real problem for Jeudon's red/black deck. So Jeudon made Kavu Monarch. I might not be able to kill your guys so I'm going to tread over them instead. This is exactly what he started to do with the Monarch and a slimy subject. Österberg stabilised the situation by laying an Angel of Mercy and was soon able to go on the offensive with that and a Glimmering Angel, boosted even further with Wings of Hope. Jeudon laid a Phyrexian Slayer and then next turn made a Pouncing Kavu with kicker. This pumped up the Monarch and more importantly had haste. In charged the Kavu army but Österberg was able to Restrain the Monarch and keep the damage to an acceptable level. The angels knocked Jeudon down to 5. Facing defeat Jeudon zapped Österberg to draw a card and then laid a Firescreamer, a firebreathing kavu that now had trample because of the Monarch. Another all out assault with the kavu left Österberg on 3 life. Now he couldn't afford to attack with his fliers as Jeudon could block with the Slayer and survive to kill Österberg when he attacked back. The squadron of angels faced down the kavu horde in a tense standoff. Both players needed to topdeck something useful. What followed were some long, carefully thought out turns as each player tried to look for any way to break the deadlock. Jeudon then made the bomb, Phyrexian Portal! Österberg needed an answer, quickly. As if that wasn't bad enough, Jeudon made a Thunderscape Apprentice the turn after and, far more ominously, he had 6 mana available to activate the Portal. Österberg didn't draw anything and so conceded, knowing he wouldn't be able to win with Jeudon able to search his library for any card.

Time was called just after both players had finished shuffling up for game 3 and so a draw was agreed.