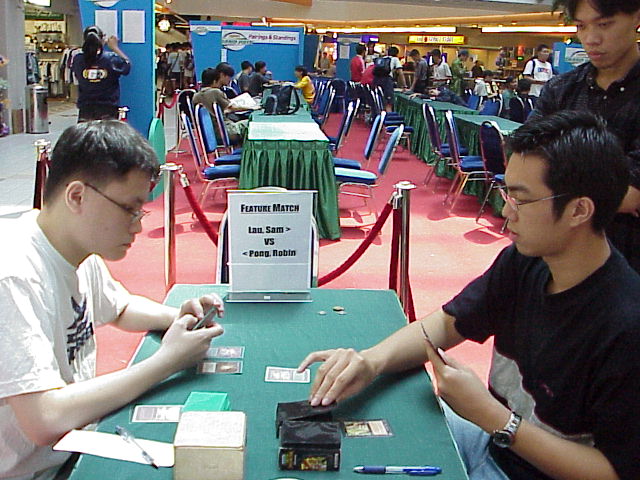 No. He's not from Canada. This Sam Lau is a Singapore native - not a member of this year's Worlds Team Finalist Canadian team. In round 10, he played against fellow Singaporean Robin Pong. Pong is one of Singapore's top-ranked players, along with several other players in the Grand Prix. Both players were playing Trix . . . but one of them has some supersecret Ice Age tech.

Lau won the coin flip and led off with a Duress, snatching one of Pong's two Demonic Consultations. Pong dropped his Mox Diamond so that he could play something on turn three. Lau had no play, so he passed the turn. Robin Consulted for a Necropotence and Lau Brainstormed for a Force of Will, which he used to counter the Necro. A short period of rebuilding ensued, as both players were pretty much exhausted. Pong led with a Duress, while Lau stalled at three land, combo in hand. A turn later, Robin Vampiric Tutored 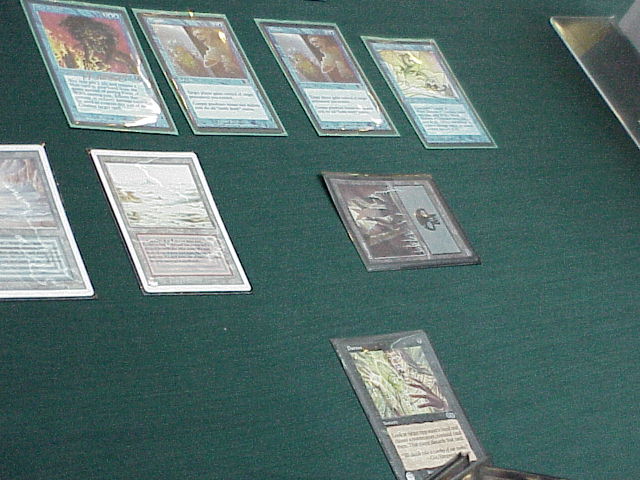 for a Necropotence in response to a Duress and when he played it, the game drastically shifted. He Necroed for twelve, finding the combo, but only a Duress to defend it. Sam drew and dropped his own Necro and drew thirteen cards. Pong's Duress was Forced, so he played his Illusions of Grandeur, and Necroed for nineteen, drawing his entire library. Sam's plan switched to Hoodwinking the Illusions for the win. He untapped, played a land and Hoodwinked. The Hoodwink was Misdirected to Sam's own Necro, so he Consulted for a Force of Will. His Force of Will was Force of Willed, and Sam gave a deep sigh, having used up every card in his hand and more than half his library, trying to make a single spell resolve. Robin untapped and Donated the Illusions, so Sam scooped.

Game two was all about Duress. Sam Duressed Robin's Duress, so Robin drew a Duress and was only able to snag a Firestorm. Both players laughed and each played a turn two Mox Diamond. Sam Tutored for his old friend Necro, so Robin Tutored for a Duress, hoping to pull together enough disruption to carry him through the card advantage. He Duressed an Illusions, but Sam went into aggro mode, playing a Masticore then a Phyrexian Negator. Pong was in an awful situation, but he managed to topdeck a . . . 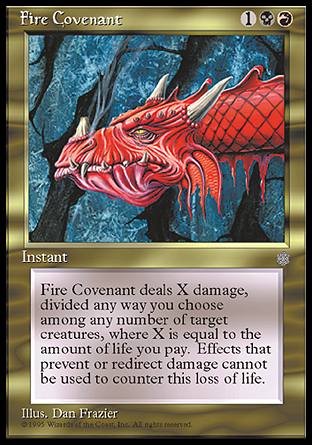 A Fire Covenant. Yes. The plan was to pay a bunch of life and deal a ton of damage to the Negator, forcing his opponent to sacrifice all of his permanents. He got a little excited counting up Sam's permanents and failed to realize that he had two untapped lands, so he would be able to shoot the Negator with his Masticore to prevent the Covenant from wrecking him. He realized this when it happened - and he had already paid life down to four, and the Masticore finished the job.

With less than ten minutes left in the round, both players moved quickly into game three. In the early game, Robin could not pull out of the two land range. With three lands, his deck barely functioned. With only two, he was crippled. His early Duress stole Sam's Necro, keeping him from jumping to the win. Lau Consulted first turn, losing half of his deck in search of a Mox. He played a turn three Negator, which looked very good for the win. When he tried for a turn four Masticore, it got Force of Willed. Pong had drawn a Tutor and used it to find a Badlands, hoping to get to a Fire Covenant before he got too low on life. He played his own Negator.

Here's where the game became questionable. With fewer permanents in play, Pong had practically nothing to lose by blocking with the Negator. However, Lau, with seven cards invested (five permanents and the card pitched to the Diamond) was at a disadvantage. It seemed obvious for Lau to hold the Negator back, in hopes of finding a Firestorm to wreck Pong. But he attacked. And Pong didn't block, even though it would have left each player with two cards in hand and generated card parity to counteract the disparity Pong had to give up, in order to maintain a decent board position. On Pong's next turn, he tried to play a Necropotence, which was Annulled. Even though the board position had not changed, Pong scooped.