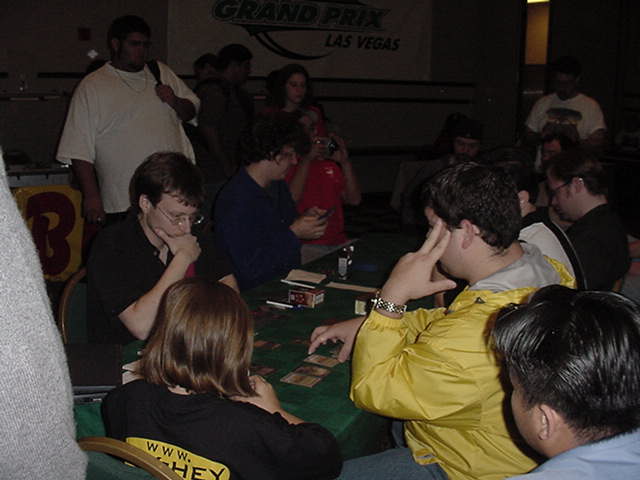 Hometown hero Shannon Krumick went into round 10 without a single loss on his record. The veteran of 7 Pro Tours who finished 19th at Worlds '99 has picked up two draws over the course of the weekend, however. His tenth round opponent - Your Move Games owner Rob Dougherty - sat down with the same 7-0-2 record. Dougherty designed the Benzo deck that got two of his teammates into the Top 8 in New Orleans and himself into the Top 16, but he switched to a slightly less explosive but much more resilient graveyard deck for this event. "Wild Zombies" uses Hermit Druid to spill Ashen Ghouls, Krovikan Horrors, and Squee's into the graveyard where they can be abused by Zombie Infestation and Wild Mongrel. Krumick is playing the breakout archetype of the weekend: PT Junk. Junk has the most efficient creatures and the super-flexible removal available in green, black, and white. The regenerating Spirit Lynx and River Boa have great synergy with Pernicious Deed while Tithe makes the whole thing hang together. 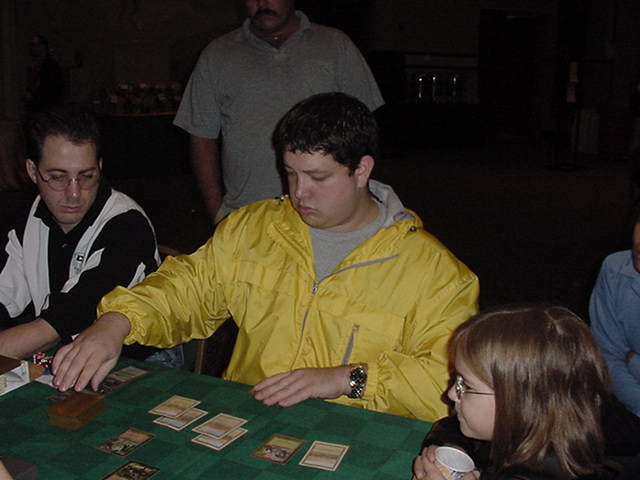 Krumick had the Swords to Plowshares he needed to stop Dougherty's Hermit Druid before it could be activated even once at the beginning of game 1. Krumick also used a Wasteland and a Vindicate to deprive Dougherty of black mana for most of the early game. Dougherty did get to Firestorm away a Lynx and a Boa when Krumick overextended a bit, but he had nothing better to do for several turns than block Treetop Village over and over with Squee. Another Wasteland ruined any chance Dougherty had of coming back.

Dougherty Duressed away Krumick's Deed on the first turn of game 2 and then played Zombie Infestation. Krumick top-decked a Wax/Wane so Dougherty only got one zombie from his Infestation, but Dougherty buried a couple Krovikans plus an Ashen Ghoul, Vampiriced for a new Infestation, and was off to the races. Krumick almost recovered with a second Deed, but Dougherty was able to finish him off thanks to Ashen Ghoul off the top on the last possible turn. Any red source would also have won Dougherty the game with the Firestorm he'd been holding. 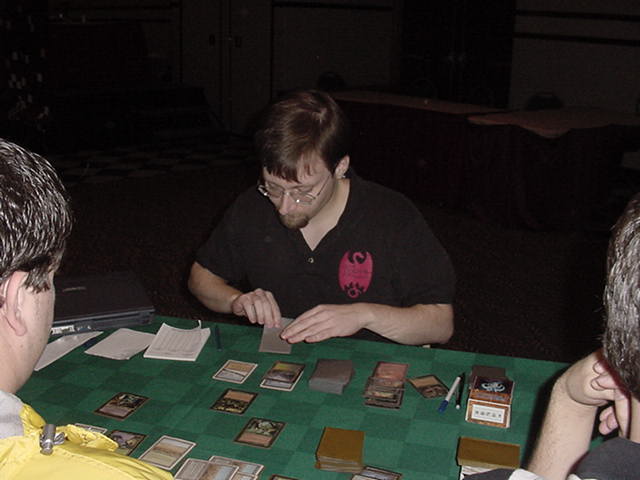 Game 3 went just the way Dougherty wanted it to go - an early Duress cleared the way for a turn 2 Hermit Druid which spilled three Ashen Ghouls, three Squee's, two Krovikans, and about a dozen other creatures into his graveyard. When Ashen Ghouls and elephant tokens fight, it doesn't take long for the Ashen Ghouls to win. Oh by the way Wild Mongrel is kind of scary when your opponent has 10 cards in their hand every turn. Krumick spent the last two turns just studying Dougherty's graveyard in case the two run into each other again in the Top 8.