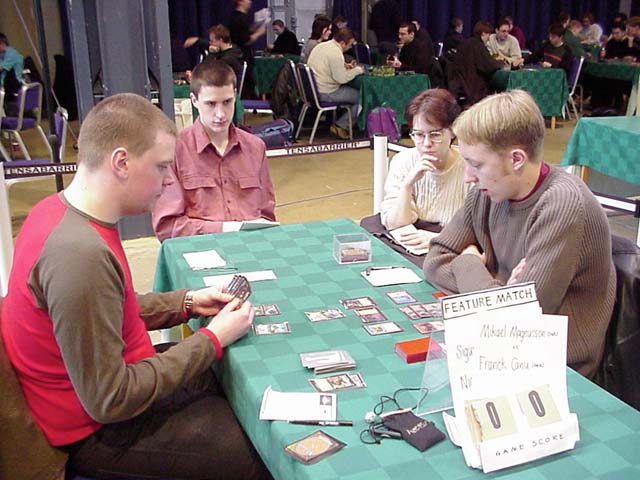 This feature match had some of Scandinavia's finest players playing against each other. These players have known each other for a long time and during the match the players were constantly talking and joking with each other.

Mattias won the die roll and chose to play first.

Mattias played a second turn Ravenous Rats to which Sigurd discarded a Swamp. Sigurd did nothing till his turn 3 when he played his first creature: a Vodalian Zombie. Mattias proceeded to search for a mountain with a Terminal Moraine to give him access to all colors of mana his deck needs. He then played a turn 4 Mire Kavu, which was demised on Eskeland's turn 4. On the next turn a Nightscape Familiar and Shoreline Raider - which was Mourninged on Eskeland's turn - joined Mattias' Rat.

Besides playing the Mourning on his turn 5, Sigurd also played a Cavern Harpy, returning his Zombie to his hand. The next turn both players played a 3/3 black guy, Phyrexian Bloodstock for Mattias and a Trench Wurm for Sigurd, which traded on Mattias' next turn. A Caldera Kavu then joined his growing army and things were looking good for the Swede. 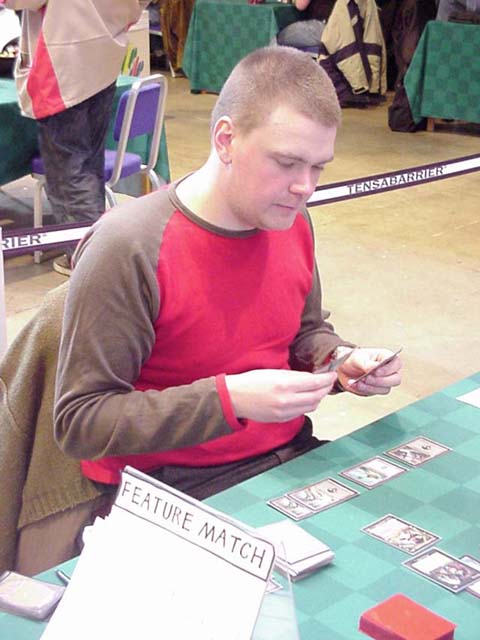 This changed though when Eskeland enchanted his Harpy with a Sinister Strength, suddenly putting Mattias on a 3 turn clock. He also replayed the Zombie. Mattias tried to race the Harpy by attacking with his Rats, Familiar and Caldera Kavu. The Rats were killed by the Zombie and the Kavu was pumped three times to put the life totals at 9-10 in Eskeland's favor. He then emptied his hand by playing a mountain and a Rogue Kavu.

Sigurd proceeded to attack with his Harpy and play a Nightscape Familiar of his own. Mattias top-decked a zap, but when Sigurd fizzled it by Recoiling the targeted Familiar in response he knew he had lost and conceded the game.

Mattias sideboarded out some of his expensive creatures: Phyrexian Bloodstock and Phyrexian Reaper. He replaced them with a Phyrexian Battleflies and a Recover. Eskeland chose to not change his deck and showed his sideboard with the only slightly playable cards being Draco, Sisay's Ingenuity and Opt.

Mattias then showed some sideboard tech by playing the Battleflies. On Eskeland's turn 2 the Cavern Harpy that killed Jorstedt in the previous game made a return. 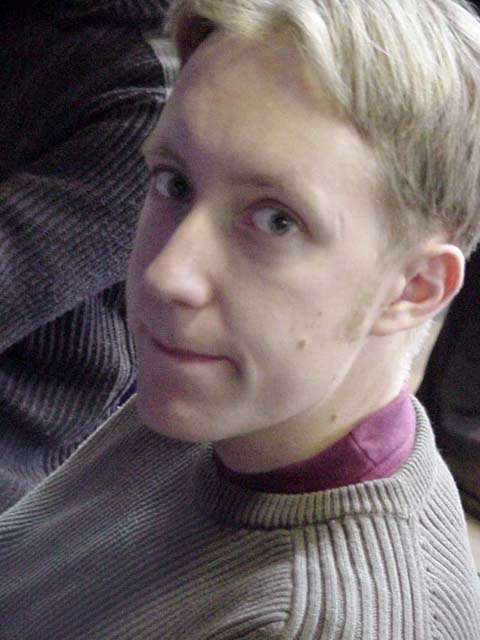 On his third turn Mattias could only play a Swamp and say go. Sigurd replayed his Visionary and attacked with the Harpy. Mattias then played a Mire Kavu and Sigurd answered with a Trench Wurm. Mattias attacked with his Mire Kavu and Battleflies. Sigurd chose not to trade the Kavu for his Wurm. Instead he attacked back, played nothing and on his sixth turn, Mattias Plague Spored the Visionary and an Island while his Mire Kavu was Recoiled at end of turn.

Eskeland emptied his opponent's hand with a Bog Down and Hypnotic Cloud (both without the kicker) and continued the beatdown with his Wurm, Harpy team. Mattias proceeded to topdeck a Shoreline Raider sacrificing his Sulfur Vent, which he used to block the incoming Trench Wurm together with his Battleflies. When his Raider was recoiled and his life was reduced to 2 by the Harpy, he figured it was a good time to concede again.

Cathy Nicoloff wrote these limericks to summarize the games:

The second game started small too,
And it favored the creatures that flew.
Some bounce was applied
Against Mattias' side.
And that Bog Down was one he would rue.