Swedish player Landgraf is running blue-black Infestation Upheaval while his opponent, Torben Twiefel is running a fast blue-green deck based around threshold. 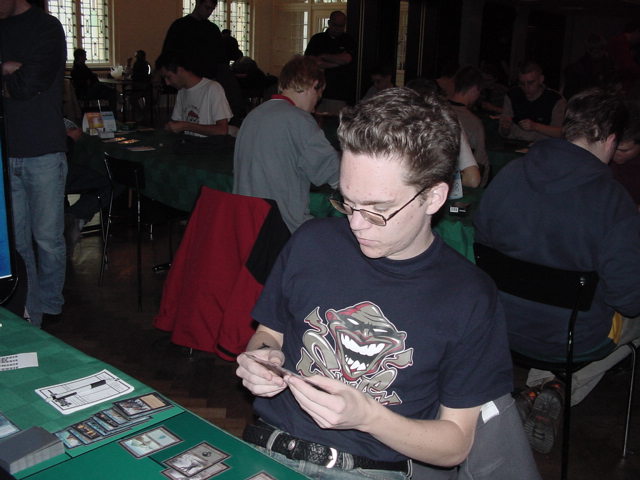 Landgraf was forced to mulligan his opening hand and had to take mana burn off a Darkwater Catacombs to Blood a Mongoose. Twiefel had problems of his own as his deck refused to cough up a third land or island. His deck still seemed to run, smoothly. Werebear followed the blooded Mongoose and was followed with another Mongoose and a Basking Rootwalla that Landgraf was forced to Logic. Mongrel picked up the pace and while Landgraf was able to slow things down with a couple of Aether Burst his deck gave him no more help and Twiefel just ran him over.

Game two and it was Twiefel’s turn to mulligan, unfortunately the six cards weren’t much better. He kept the five and didn’t find an island again. He found a couple of Mongrels but he had to break Standstill to cast them and Landgraf took care of one with Syncopate and another with Innocent Blood. A second Standstill combined with Compulsion put Landgraf firmly in control.

Twiefel’s Bearscape prevented him from casting a third Standstill so that was thrown to Compulsion instead to find a second blue mana source. Deep Analysis netted Landgraf 4 more cards while Twiefel didn’t really have the cards in graveyard to make full use of Bearscape. He added a Wonder to the attack and protected his creatures from Mutilate with Envelop.

Aether Burst and Edict soon wiped out Twiefel’s team while Landgraf started to draw a ridiculous amount of cards off multiple Deep Analysis. His deck wasn’t providing much in the away of offense. A Guiltfeeder looked particularly unexciting versus Twiefel’s virtually empty graveyard. It was joined by a second and while they weren’t exactly a quick kill Landgraf looked to have too much card advantage to really worry.

He was only on 5 life though and couldn’t seem to find a permanent answer to Twiefel’s Mongrel. Sniffing perhaps a hope Twiefel sent in the Mongrel and pitched his hand for lethal damage. The Swede had an Aether Burst though and then a Logic for the returning hound. Next turn Landgraf could safely cast the Upheaval he needed to seal the game 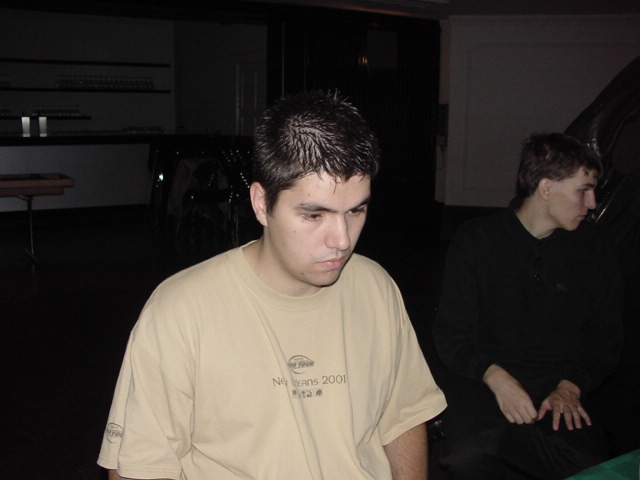 Twiefel came racing out of the blocks in game three with a nightmare draw for Landgraf. Turn two Mongrel madnessed out a Rootwalla at the end of a second turn in which Landgraf could only put Compulsion on the table. Twiefel compounded Landgraf’s problems with a Standstill of his own.

Landgraf broke the Standstill in order to Butcher a Mongrel only for Twiefel to drop another with a Werebear for company. Mutilate with two swamps in play succeeded in killing only the Rootwalla as Twiefel pitched two cards to the Mongrel to gain threshold. An attack dropped Landgraf to 4.

Unable to block with the Butcher as Twiefel had Wonder in the bin Landgraf was forced to cast Innocent Blood. When Twiefel pitched a Rootwalla to soak it up Landgraf conceded.