Two New York residents sat down across from each other in round ten, with a loss meaning elimination from Top 8 contention. Tony and Ed were definitely friendly, and there was a fair amount of chatter, but both players were very intent on winning this thing. 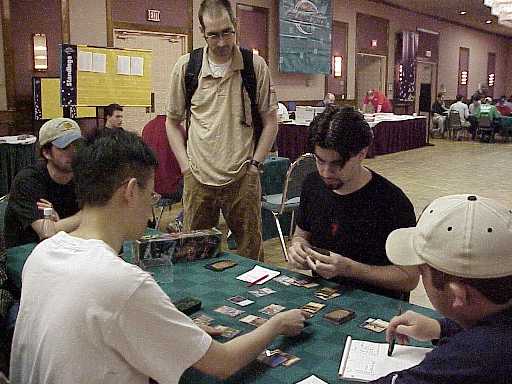 In a long game one, both players traded blows back and forth, with each player having multiple good threats, including many, many 'Master Decoy' type creatures in play on either side. Tony's early attempt (turn 7) at a Molimo, Maro Sorceror got Excluded, and then the board stabilized for a long while, with Tony having the superior ground forces in the form of a kicked Prison Barricade, Nomadic Elf, kicked Benalish Lancer, and Kavu Climber. Meanwhile, Ed had a great defensive position with two Stormscape Apprentices, a Samite Archer, and a Benalish Trapper. Eventually Ed started killing off some of Tony's more annoying creatures, like Kangee and a Thornscape Apprentice, and began to pick away with the Samite Archer. Tony kept the pressure on with an Ordered Migration for three, and an Armadillo Cloak, but finally just gave up with about 20 minutes to go in the round, realizing he was basically locked up and wanted all the time he could for the final (hopefully) two games. 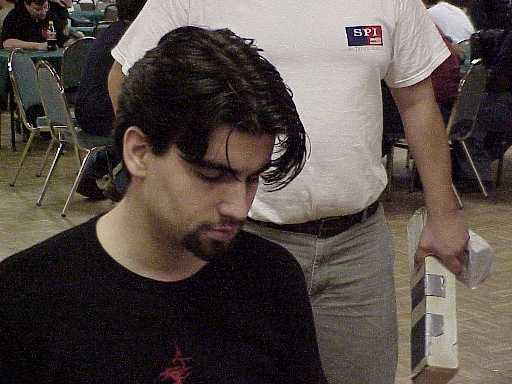 The second game was a lesson on why a mana curve in sealed/draft formats is a good thing. Tony's first four turns icluded a Thornscape Apprentice, Utopia Tree, and Ordered Migration for 3 tokens. Meanwhile, Ed had a turn 3 Drake-Skull Cameo, followed by a turn 5 Faerie Squadron (kicked). Tony Repulsed the Faerie Squadron, and laid a turn six, Wayfaring Giant who ended up being 4/6. Ed had a decent answer with a kicked Hypnotic Cloud, making Tony discard Molimo, Maro Sorcerer, Plains, and another Thornscape Apprentice. When Ed followed up with Atalya, Samite Master, next turn, it looked like he might stabilize, but Tony kept dropping bombs, like a kicked up Benalish Lancer. Ed was forced to replay the Faeries as a 1/1 to chump block and gain life with Atalya, but eventually just got overrun with the help of that original turn one Stormscape Apprentice tapping many potential blockers near the end. 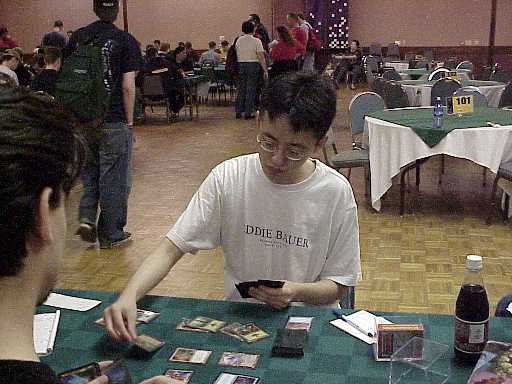 At this point there were about 7 minutes left to go in the round, and due to a couple judge discussions, Tony and Ed had an extra 4 minutes, so they hurridly shuffled and got ready to try and complete a game 3. Near the end of the round, Ed again cast Hypnotic Cloud with kicker, wrecking Tony's hand and taking a very important Explosive Growth away. When time on the regular clock expired, it was pretty clear that the game was going to be a draw, Ed's draw wasn't great but it wasn't horrible, and Tony's deck is solid, but it's basically incapable of winning a game quickly. Tony did manage to get Ed down to 2 before the three extra turn rule expired, and Ed even admitted to me later that, "Tony probably would have beaten me, if we had at least one or two more turns." Certainly no one played slowly, both players were flying in the final turns, but it's a shame to see such a long match not come to a decision. The MVP for Ed in this match was definitely the kicked up Hypnotic Cloud, as he probably got the draw in game 3 solely because of that card. At any rate, the draw basically removed Ed from contention for top 8 at 6-2-2, and now Tony needs to win out (7-2-1) to have a shot.