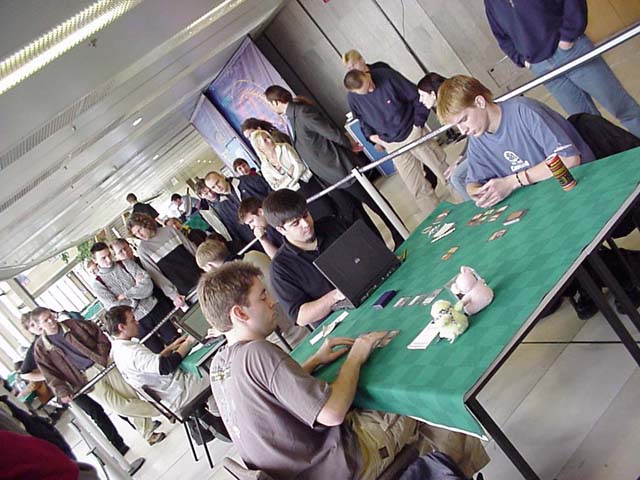 Trey started off by playing a Dream Thrush followed by a Tower Drake. Petr on the other hand had a very slow start especially considering his colors, which were red, green and white. All Petr did in his first five turns was to cast Thornscape Apprentice, while Trey was more aggressively fitted with Tower Drake Metathran Zombie and Dream Thrush.

Although he had a very good start, van Cleave didn't play anything on his fifth turn. At the end of his turn the Czech played Scorching Lava on Trey's Tower Drake; completely forgetting it's ability. Trey just pumped it up and wondered why his opponent had done such a thing.

He suspected, that he could have a Singe or something similar but he realized it had just been a mistake from his opponent, who was apparently tired. Next turn trey wanted to attack but his opponent tapped his Tower Drake. He then played Reckless Spite targeting the Apprentice and a Treefolk Posolda had just played. 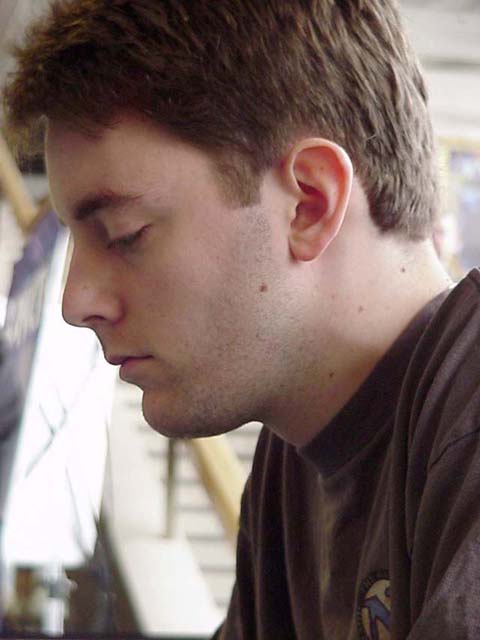 Trey kept attacking until Petr found his Nemata, Grove Guardian but probably too late to do any difference in the game since he only had 5 life and his opponent had enough creatures with flying to get enough damage through to win the game.

After a mulligan on Trey's side the next 4 turns were spent with laying land. Then the Czech gets up to five mana and played a Kavu Climber, while his opponent played a kicked Faerie Squadron. This time Petr gets his Nemata on his sixth turn still with 20 life but only to see it be targeted by Slay. Trey started pounding on his opponent serving four damage per turn with his two flyers. Posolda looked even more in trouble when his opponent cast a Zanam Djinn.

Petr decided to go on the offensive and attacked with two creatures both with power three. After Trey decided not to block anything his opponent first played a Gerrard's Command then an Explosive Growth and finally a kicked Magma Burst targeting Trey's Squadron and Trey himself giving exactly enough damage to kill his opponent.

This game seemed to be an exact copy of the last two with Trey calling the Czech's deck as "The slowest red/green deck in the world." Petr played a Pincer Spider, which could stop most of his opponents flying threats, followed by an Aurora Griffin. Trey knew he had to do something and cast a Reckless Spite on both Petr's creatures. After having suffered such a big loss, the Czech player tried to come back with a Thunderscape Familiar enchanted by a Whip Silk. 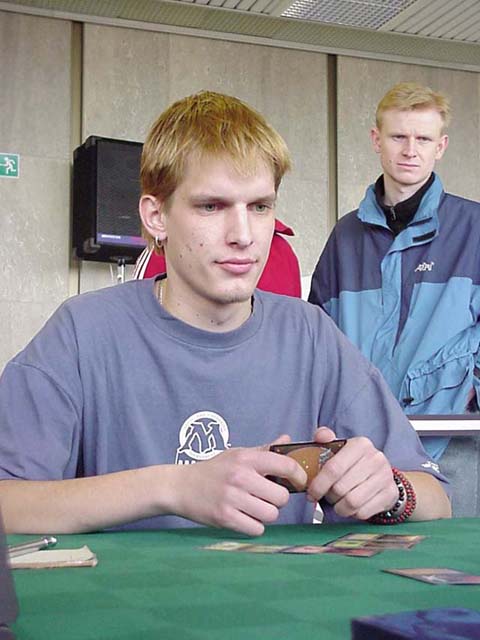 When Trey used both his Dream Thrush's to turn all of Petr's non/green mana into green, the Czech played a Scorching Lava targeting Glimmering Angel, which was made untargetable by Trey. Once again the Czech misplayed this spell thereby loosing a very useful card against trey. Trey kept on hindering his opponent's mana sources and attacking for four damage per turn.

Trey was holding a Wash Out a Recoil and a Crypt Angel, which were probably enough to finish his opponent off. When Trey wanted to transform Petr's mountain into a forest, the Czech responded with a Zap on Trey's Tower Drake, to which he used the second Dream Thrush to transform one of his Swamps into a Plains to pump up the Drake.