You will always remember where you were when you see greatness happen. For me, it was right next to the table, typing on this very laptop, as I watched Jon Finkel deal the final points of damage to win Pro Tour Kuala Lumpur in 2008. By this point in his career, it's impossible to say anything about Finkel's game that hasn't already been said. He is one of the best players (or simply the best) to ever play the game, truly loves the game, and seems, by all accounts, to be a legitimately nice guy.

I was also there in Salt Lake City this year when Shenhar won his second Grand Prix in six months. There's just something electric about watching a match as important as the title match of a high profile event, and watching the way that great players manage themselves under the pressure. Finkel has made a career of thriving under pressure, and Shenhar has begun his career with the same cool composure. 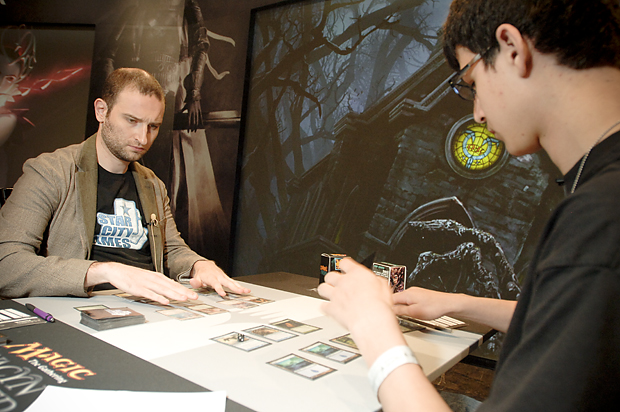 Even against Hall of Famer Jon Finkel, Shahar Shenhar isn't going to drop his composure. Both players are hungry for their wins in this Pro Tour.

He has scored points in each event he has played in during the 2012 season, and a little thing like playing against the best player to pick up a Magic card isn't going to derail him from his quest for his first Pro Tour Top 8.

Shenhar started on the play, but Finkel was the first on the board with a lonely Angelic Wall on the second turn. Shenhar finally gave the Wall something to do with a Trusted Forcemage on the third turn, followed with a Scrapskin Drake to pair up with it. Finkel made a Druid's Familiar, but chose to leave it unpaired, opting to wait for a better target. When Shenhar attacked with his soul mates, Finkel blocked the Drake, dropping to 17.

The better thing he was waiting for arrived on the following turn, as Finkel played a Spectral Gateguards, pairing it and the Familiar up, giving both +2/+2 and vigilance. He attacked for 4 and passed the turn. Shenhar found himself unable to attack all of a sudden, and was forced to continue to build his board. He added a Wingcrafter, Diregraf Escort, and Alchemist's Apprentice to his side and passed the turn. Finkel, meanwhile, continued his assault. Shenhar chose to block both of Finkel's attackers, but a Joint Assault swung combat in Finkel's favor, leaving Shenhar with just a Wingcrafter and Scrapskin Drake on his side. Shenhar found a miracle Blessings of Nature on his turn, as well as a Nightshade Peddler, giving him a massive Drake, which could create some serious problems for Finkel in the turns to come. He began attacking, and Finkel dropped to 10. 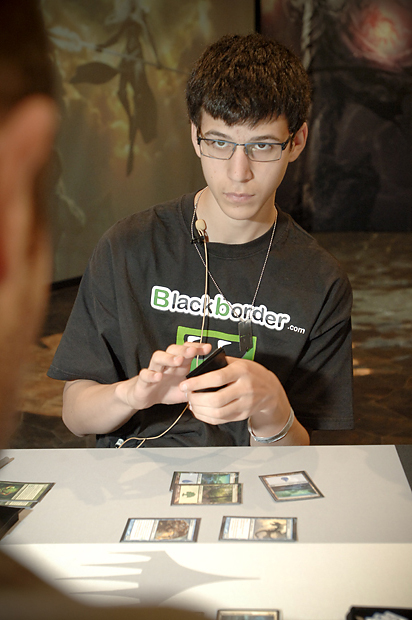 Nothing says you're on a clock quite like a giant flying creature, courtesy of a Blessings of Nature miracle.

Finkel had his own attacks going on, though, and he wasn't running into the same mana problems that were hindering Shenhar. He was only sending his least effective creatures to get around the Nightshade Peddler, but they were taking their toll on Shenhar, dropping him to 8. Finkel added a Geist Trappers and Flowering Lumberknot to his side, but the Trappers died before it could take the Drake out. Instead, Finkel opted to use a Defang to turn the Drake into a massive blocker.

Shenhar had just the answer, however, using a main deck Natural End to remove the aura and free his drake up to attack. Rather than take a hit from the 6/7 flier and drop to 4, Finkel just chose to chump block it with his Angelic Wall. Post combat, Shenhar added a Nettle Swine to his team and paired it up with his Nightshade Peddler. This left him with those three creatures in play to Finkel's paired Gateguards and Familiar, Thraben Valiant, and unpaired Knot. Life totals sat with Finkel at 10 and Shenhar at 11. Finkel attacked with only his Gateguards, which Shenhar allowed through, dropping to 7. Shenhar's Drake dropped Finkel to 4, putting him on one turn to survive.

With one turn left on the clock, Finkel needed to either find a way to kill Shenhar or at least his Drake. He once again attacked with his Gateguards, prompting Shenhar to trade with his deathtouch Nettle Swine. When Shenhar went to attack Finkel and finish him, Finkel use a Sheltering Word on his Flowering Lumberknot to gain 5 life. After combat, Shenhar added a Soul of the Harvest to his team. At the end of Shenhar's turn, Finkel used a Cloudshift to reset his Druid's Familiar, pairing it up with the Flowering Lumberknot. He also added a Trusted Forcemage to his team and paired it up with the Valiant. Unfortunately, valiant as it was, Finkel's attempt didn't generate enough damage to kill Shenhar. With no more tricks up his sleeve, Finkel was forced to concede the first game.

Finkel's start for the second game was exactly what he needed to bounce back after the first game. He opened with a Thraben Valiant that immediately paired with a Trusted Forcemage, attacking Shenhar for 3. Shenhar had a Diregraf Escort on the second turn, and followed it up with an impressive Fettergeist that seemed to be likely to hold Finkel's troops at bay. Undeterred, however, Finkel sent his team. Fearing the Joint Assault that Finkel had used to blow him out in the first game, Shahar wisely chose to simply take 6, dropping to 11. After combat, Finkel added another Forcemage to his team. Shenhar swung back with his Geist, dropping Finkel to 17 before adding a Scrapskinwing Drake to his team. 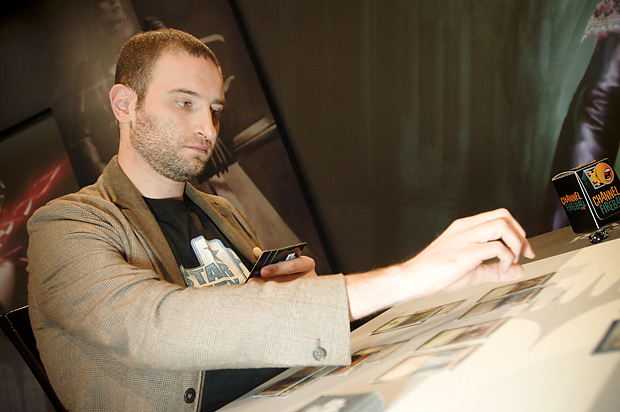 Finkel's green creatures are capable of some brutal beatdowns.

Finkel attacked with all of his creatures, prompting Shenhar to chump block with his Escort, dropping to 6 in the process. An Angelic Wall came down to stop Shenhar's attacks, and Finkel passed the turn. Shenhar found a Nightshade Peddler to team up with his Fettergeist, forcing Finkel to evaluate his attacks. Finkel found a Geist Trappers, choosing to team up his ghostbusters with the other Forcemage, giving him quite the impressive team. Still, he chose to wait for the alpha strike. Shenhar found a miracle Blessings of Nature on his team, putting one counter on his Geist and three on his Drake, before passing his turn.

With Shenhar more or less tapped out, and his massive army assembled, Finkel sent his entire squad: two Trusted Forcemages, a Thraben Valiant, and a Geist Trappers. Shenhar lined up the blockers he could, but it wasn't enough to stop Finkel's attacks, sending the match to a third game.

Shenhar had to take the first mulligan of the match in the third game, but found his second hand much more reasonable. He didn't get off to a blazing start, but his third-turn Scrapskin Drake was good enough to be the first creature on the board. Finkel used an Abundant Growth to cycle into something to play, but found nothing and shook his head. He made a Somberwald Sage on his third turn, just before having a Trusted Forcemage become Stolen Goods on Shenhar's turn. So much for trusted...

With access to an immense amount of mana, Finkel made a Voice of the Provinces on his fourth turn, a bit early to say the least. When it got enhanced on the following turn with a Druid's Familiar, things seemed just about over. When Finkel used a Cloudshift to untap it to block Shenhar's attacking Drake, just about over became a handshake instead.

After the match, Shenhar politely asked Finkel his opinion on the opening hand he threw back in the final game. Understanding that Finkel's deck was fairly quick, Shenhar opted to pitch back a hand of three Islands, Blessings of Nature, two Nettle Swines, and a Soul of the Harvest. Even though he was playing ten Forests, he didn't feel that his draw had enough early pressure to counter Finkel's potential starts, and since his hand needed his early draws to be both Forests and early answers, he felt it was asking too much. Finkel agreed, adding, "That's tough. I think it's a mulligan, but I can definitely see myself keeping this hand and regretting it."

In addition, in a show of sportsmanship that is rare at this level, after Shenhar had shown Finkel a few of the gems in his deck, he asked Finkel about how many Forcemages and Joint Assaults he had in his deck. Finkel initially hesitated, and his face almost seemed to say, "I don't really want to reveal any information about my deck," but he eventually let Shenhar know the answers to his question, again politely asking that Shenhar not reveal the information to his next opponent, and that Finkel would protect Shenhar's information as well. The interesting thing about this exchange is that, in addition to the fact that it happened at all in an environment where 90% of the players would refuse to talk to gain whatever edge they could, you could tell that both players meant it when they said that they would keep the information safe. Conduct like that is rare nowadays, and it's good to see that sportsmanship and communication can thrive in this hyper-competitive environment.