Tzu Ching Kau's most recent top finish was the final four at Grand Prix Singapore. He faces one of Hong Kong's best players, the renowned Teddy Ng. Kau has drafted a G/R/b deck that uses a number of accelerators. Teddy is playing a slightly underpowered G/W/u deck that splashes black for Doomsday Specter. 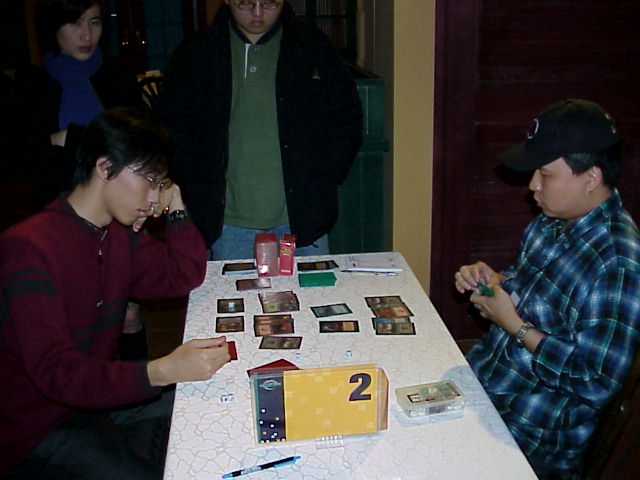 Kau hit the ground running in game one. His turn two Thunderscape Familiar resulted in a turn-three Harrow and Root Greevil. Turn four: Hasted Serpentine Kavu. Ng's defenses were a Vodalian Merchant and Meddling Mage (blotting out Tribal Flames). He took the hit.

Ng Cloaked up his Merchant and served, evening the race. He added a Nomadic Elf to his small numbers. Kau Maliced the Cloaked monster and played an Elf of his own. His hand stood empty. Ng copied that tactic, spilling out Razorfoot Griffin and Quirion Explorer. None of them were a match for the 4/4.

Kau played a second one, and Ng conceded.

The players' roles were reversed in game two. Ng hit early with Nomadic Elf and Shoreline Raider. His Thornscape Apprentice even had access to red mana, making blocking difficult for Kau.

He hit his stride on turn four. A Thornscape Familiar and Viashino Grappler joined his Explorer. Two turns later, with six creatures in play, he still couldn't break Ng's defenses. He had a Hull Breach for Ng's Armadillo Cloak, but no removal for an Aurora Griffin. He was likewise unable to deal with the Doomsday Specter that followed. He fell in short order.

Kau mulliganed in game three, keeping a hand without green mana. His early plays couldn't get past Llanowar Cavalry without his Thunderscape Apprentice's +1/+1 ability. Still, its black ability meant that he had some pressure to match his opponent's Aurora Griffin.

Ng looked to seal the deal with a kicked Benalish Lancer. Kau's Forest was better late than never, and after Terminating the Lancer he attacked with his Viashino Grappler. With the Apprentice at the ready, Ng chose not to block.

Unfortunately for Kau, Ng had nothing but creatures up his sleeve. He made a Rooting Kavu and Razorfoot Griffin. Kau drew Thunderscape Battlemage to stop that nonsense before it got started. Still, he had drawn a lot of land. Ng went on the offensive, and the resulting trades favored him. He kicked a Sunscape Battlemage into two cards. Soon, Kau was buried under his opponent's monsters.