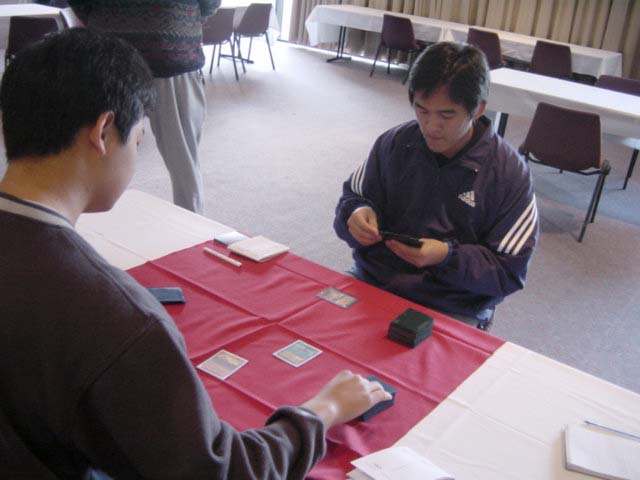 The red zone deck began with a typical start, a first turn Llanowar Elves. A Rishadan Port and River Boa were the next cards to feature for Shun. The Port had very little effect on the game, as Wei Ren played a turn 2 Tsabo's Web. From this point on Shun was never really in the game. Wei Ren's control deck was just amazing. This was the sequence of turns (the first card from Shun and the control from Wei Ren): Armageddon - Counterspell, Shivan Wurm - Wrath of God, Ancient Hydra - Wrath of God, River Boa - Thwart and even a Llanowar Elves was stopped by a Foil.

Wei Ren eventually let a Bird of Paradise in play and stated "at least it can't attack". Next a Flametongue Kavu was stopped by an Absorb and a Thornscape Familiar was counterspelled. Shun's hand was empty, had no threats on the table and decided that he couldn't win from here, so he scooped.

Shun opened game two with a first turn Birds of Paradise that was shortly joined by two River Boa. Meanwhile Wei Ren was playing draw go, hitting his fourth land without playing any spells. Shun played a Rishadan Port which kept Wei Ren on only three mana sources for a few turns. As soon as Wei got his fifth land on the table he played Wrath of God, removing the pressure from the Boas. 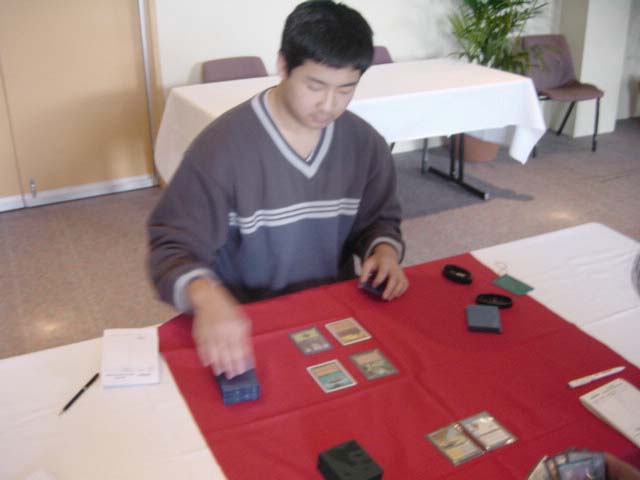 Shun next tried a Pure Reflection which was Foiled by Wei Ren, who discarded a Nether Spirit to the Foil cost. Again Wei Ren had all the answers - he stopped a Flametongue Kavu with an Absorb and then a Tahngarth, Talruum Hero was counterspelled.

Finally, Shun managed to get a Blastoderm on the table. Unfortunately because of the recurring Nether Spirit the Derm never did any damage. A Pure Reflection hit the table for one of Shun's main phases, but was removed from play by a kicked Dismantling Blow by Wei Ren, which supplied him with even more counter power. When an Ancient Hydra was stopped by an Absorb, Shun decided that he was again too far behind to have a chance and conceded.