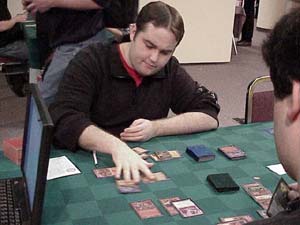 Both decks being fairly aggressive, each player got to summon a creature on their second turn. Jensen played a Thornscape Familiar. Parker had to pay one life for his 2/1 creature, as he summoned a Quirion Sentinel and burned for one.

The two creatures traded in combat, but not before Jensen summoned a turn 3 Ancient Kavu. Parker cast Harrow on his turn and cast an Obsidian Acolyte. Brock summoned a Glimmering Angel and Jensen a Kavu Aggressor.

During the next combat step, Brock blocked an Ancient Kavu with his Angel and cast Explosive Growth on it. Jensen was at the ready with Aggressive Urge, allowing the two creatures to trade in combat. Jensen then tried to remove the Obsidian Acolyte via Zap, but Parker used Wax to save it.

Parker drew more lands, as Jensen held an array of creatures in hand, including a Fleetwood Panther. He summoned a Quirion Trailblazer, fetching a fourth color - white.

Obsidian Acolyte finally traded in combat with Rogue Kavu, leaving Jensen with a few small creatures in play as Kavu Aggressor got Hobbled. Jensen tried to cast a Fleetwood Panther, but his two green creatures were removed with Magma Burst in response.

Parker summoned a Stone Kavu, going down to zero cards in his hand. Jensen chose not to remove it with Plague Spores that turn, summoning a Kavu Monarch instead. Jensen had chosen wisely, as Brock peeled a Sulam Djinn off the top of his library. Djinn met Plague Spores, and Parker also lost his only Mountain.

Jensen attacked with his Kavu Monarch, bringing Parker down to four life, then cast Tribal Flames for four to finish the game.

Jensen started off with a mulligan, as his opening hand had only one land. The new hand was far better, though he did not have early plays. Parker started his game same way as game one - by summoning a turn 2 sentinel and burning for one. Unfortunately for Parker, he also failed to play a third land on turn 3 (though he drew one next turn). Jensen summoned a Thornscape Apprentice, and used Zap to kill Samite Pilgrim before it became active. 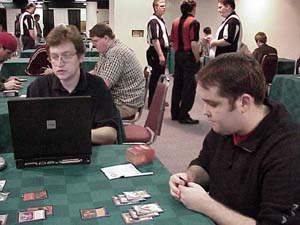 Parker used Wax to let Sentinel win in combat against an Amphibious Kavu. Jensen kept on coming with his creatures though, summoning a Kavu Aggressor. Aggressor is a perfect target for Hobble, yet Parker chose to enchant Jensen's next creature - Rooting Kavu - with it.

Jensen was almost out of gas. He summoned a Quirion Trailblazer to go get a Plains, finally bringing the Apprentice's tapper ability online. Razorfoot Griffin was Parker's next play. Jensen attempted to trade an Aggressor in combat for it, by giving it first strike - but Parker had another Wax in hand.

Parker continued to summon flying creatures with Aurora Griffin. Jensen, down to six life, did not have the means to stop this assault, nor to race against it. In desperation, Jensen used Zap targeting his opponent, in hopes to draw an answer. He did indeed - finding a Strafe and using it to kill a Razorfoot Griffin. It wasn't enough. Parker attacked Jensen down to four life, then summoned his own Thornscape Apprentice and a Charging Troll. Despite having no regeneration mana available, Parke blocked an Ancient Kavu with a Troll to make sure Jensen did not have some kind of a broken way to win that turn. On his own turn, Parker was able to attack for two more in the air (with one of the flyers becoming tapped), then used Magma Burst to end the game.

Jensen busted out early with Rogue Kavu, Quirion Explorers and a Thunderscape Apprentice. Parker had a much slower draw, and was forced to spend Hobble on the Rogue Kavu. With nothing but little creatures and Zaps in hand, Jensen summoned yet another 1/1 - a Quirion Elf. Parker left mana open for Harrow on his turn rather than cast an Ardent Soldier.. 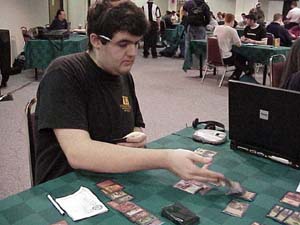 Another Hobble got played on a Quirion Explorers (!) and then Parker finally cast a target for Zap - and a good one at that - Samite Pilgrim.

Parker was holding an Ardent Soldier and Strength of Unity, but he was still another mana source away from being able to cast both on the same turn. Instead he summoned a Stone Kavu he just drew.

Jensen attacked with Rooting Kavu, put damage on the stack against Stone Kavu, then cast his Fleetwood Panther, bouncing the 4/3. Parker cast Quirion Sentinel and attempted to put Strength of Unity on it. Jensen drove the nail into the coffin by casting the second Zap in response.