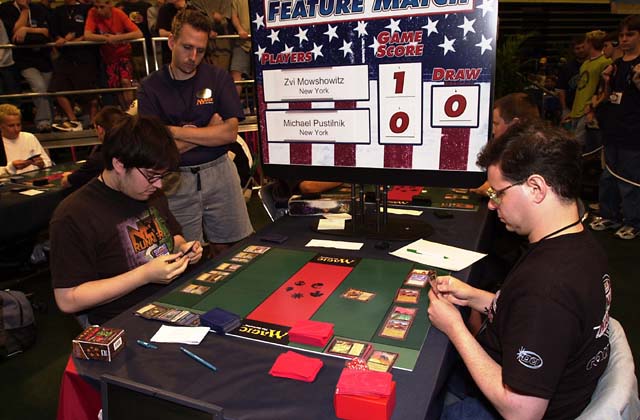 Zvi Mowshowitz and Mike Pustilnik have been playing each other at Neutral Ground New York for years and years. They each made their first PT Top 8 way back in 1997 (Zvi's was on the Junior PT). This year they've each won a Pro Tour and each remains in contention for Player of the Year. Each also put up a 9-3 record over the first three quarters of US Nationals and needed a perfect 3-0 finish in order to make the Top 8. Their Round 10 Feature Match would determine which of them stayed in contention.

Zvi is playing a creatureless blue-white control deck with Millstones for the win. Pustilnik is playing a very unusual red-green-black deck, with the mana acceleration of Fires, lots of annoying creatures (like Battlemages, Barbarians, and Blazing Specters) and enough black mana to support Duress. 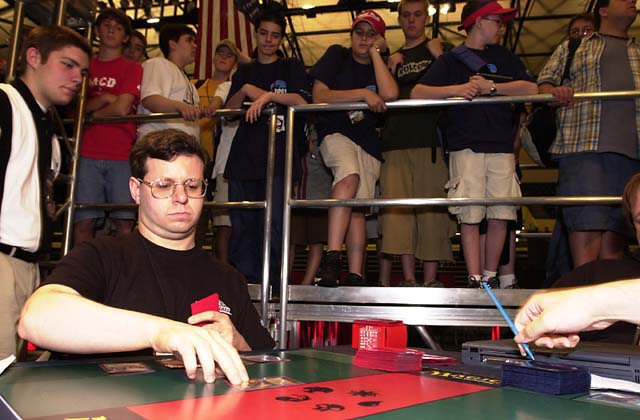 Doctor P came out with two mana accelerators, a Thornscape Battlemage (which destroyed Tsabo's Web when it came into play), and a Duress, but he was not happy when his Duress revealed two copies of Wrath of God in Zvi's hand. He took the Fact or Fiction and Zvi used Wrath to "blow up target world" and gain 3 for 1 card advantage. Pustilnik was even less happy when his next Duress revealed three counters (two of which were Absorb). He took one, tried to slog through the rest, but when his third Duress revealed that Zvi was up to four counters, and Mikey's hand included nothing but Flametongue Kavus and Shivan Wurms, Pustilnik declined to finish resolving Duress and instead just announced "you got me" and went to his sideboard for his Boils.

Pustilnik's hand destruction and utility creatures just didn't seem as good against blue-white as the speed or power of a Fires deck, but he had many of the same weaknesses. His offense in game 2 was a lowly, unkicked Thornscape Battlemage. Zvi tried to put him out of his misery by playing a turn 6 Mahamoti Djinn. Pustilnik Boiled away two islands as a response and then untapped and played Shivan Wurm. Zvi seemed suddenly less jovial - I think he expected Pustilnik to board out all of his Wurms and Zvi thought it was safe to tap out for his Moti. Once this Wurm came down, Zvi was forced to Wrath it and his own Mahamoti away. 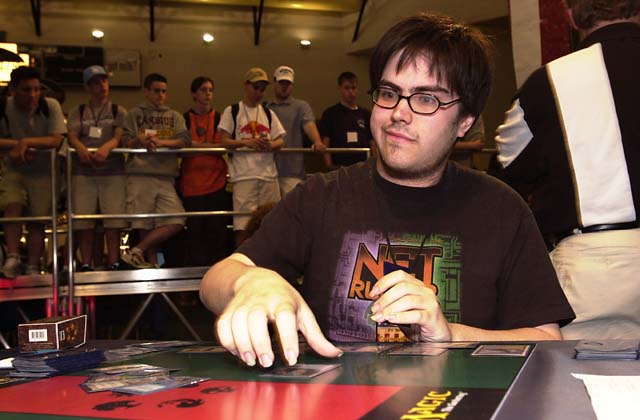 The game got a little scary for Zvi for the next few turns. He had no permission and only 6 life points to play with. He declined to play another Moti and left his mana untapped for Fact or Fiction instead. Pustilnik splits the piles into "Mageta or no?" and Zvi took Last Breath, Absorb, Island, and Counterspell. Another Boil resolved and Zvi lost two more islands, but he had seven other lands by this point, including three Coastal Towers and an Adarkar, so the Boil didn't hurt too badly. Zvi drew into a land pocket and Pustilnik got back into the game when Zvi was once again forced to Wrath away his own Mahamoti in order to sweep Pustilnik's three creatures. The game was suddenly a topdeck battle. Zvi won the war by drawing Mahamoti #3 while all Pustilnik drew was Boil #3. The crowd laughed as Zvi's third Mahamoti was followed by Pustilnik's Boil for the third straight time. Even though Mahamoti destroyed all Zvi's land every time it came into play, it was still fat enough to win Zvi the match.