Round 10: Forrest Evans vs. Jeff Cunningham 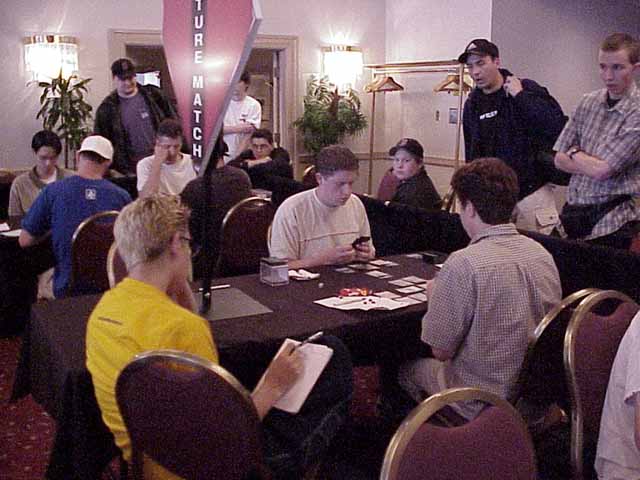 Round Ten paired former Junior Super Series competitors Jeff Cunningham and Forrest Evans. Evans played accelerated blue, and Cunningham played "Peaceful Hermit" (more on that later). Cunningham is one of Vancouver's finer players. At 5-4, Cunningham's chances at the Top 8 in this tournament are slim. Evans was in better shape at 5-3-1. There are some rumors flying around that one or two players might get in at 8-4, but the loser of this match is pretty much out of it. Forrest has really taken his kid brother Murray under his wing, and Murray is still in contention in this tournament. 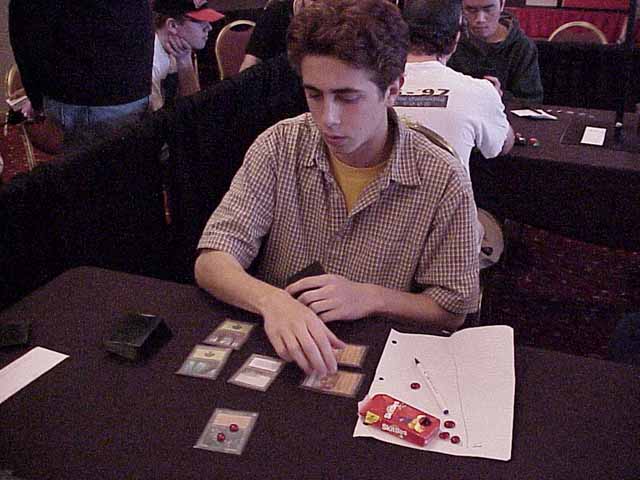 Both Jeff Cunningham and Jurgen Hahn (who also had 16 points going into Round 10) played the Peaceful Hermit deck today. It's basically "Angry Hermit," but has white mana for Armageddons and Disenchants over its angry cousin's Arc Lightnings and Avalanche Riders. with Armageddon. Cunningham won the die roll and chose to play. He kept a six-land hand with a Blastoderm. Evans decided to mulligan. He looked at his six-card hand and decided to mulligan again before keeping a five-card hand. Predictably, the game started off very slowly. The early Rishadan Port wars resulted in a Cunningham advantage. He followed that up with a Blastoderm and then a Masticore. Evans played Treachery on the Masticore, ending his turn with a huge smirk. Cunningham attempted to play another Masticore but his attempt was Thwarted. Cunningham failed to draw an answer for the Masticore over the next five turns and lost the battle against his own creature. 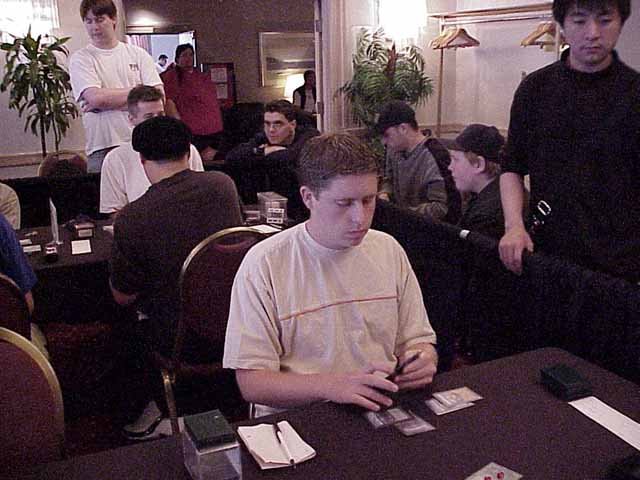 The next game also started out slowly. Cunningham should be the aggressor, but he just didn't draw any of his Birds or Elves to get a burst of speed. He did play a fourth-turn Blastoderm, but after thinking about it Evans countered it. Then Evans drew and played a Masticore . . . Jeff got a horrified look on his face as he realized his situation. Cunningham played Deranged Hermits on each of his next two turns, but he still couldn't beat an active Masticore. In two games, Evans's Masticores dealt 40 damage, once again proving its dominance in the Standard environment.