Round 10: Gab Tsang vs. Matt Vienneau 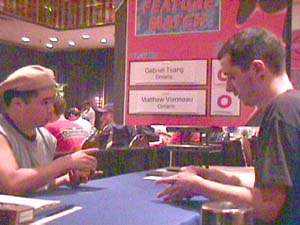 Gab Tsang has been playing on borrowed time ever since Terry Tsang conceded to him two rounds ago. He cannot afford a loss or a draw is he has any hope of making the top 8.

His opponent, Matt Vienneau, is in the same boat, needing to run the table in order to be eligible for Sunday play.

Gab, playing green/white/splash red, went first and put out a Phantom Nomad on turn 2, and then added an Auramancer on turn three just to keep up the beats. Vienneau, playing white/blue, slowed the bleeding by trading a Vigilant Sentry for the Aurmancer and then dropping a big ol' Mirror Wall. Gab added two Acorn Harvest tokens to his side, and sent with the team. Matt blocked the Phantom with his Wall, but Gab was sitting on Muscle Burst, and the Wall went away.

Gab flashed back the Harvest and put out a Twigwalker, making blocking a real chore for Vienneau. Matt had another Sentry, and made the smart block on the 1/1 Nomad, which would die regardless if Twigwalker intervened.

Gab continued summoning creatures, putting out a Mystic Familiar and then an unusable Chainflinger via an Abandoned Outpost. Vienneau had a few more men of his own, including a Pilgrim of Justice and a Millikin with Floating Shield - green on it. Matt's blocking could only deal with some of the tokens, and the Familiar was whittling away at his life total. 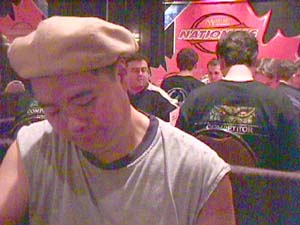 The big turn came when Gab attacked with everything. His plan was to get lethal damage (3) through via the Twigwalker and the Familiar, as Matt had no flying blockers. Matt cast Keep Watch before blockers, and drew four cards. He had two Chastises in his deck, and had he drawn one, he could have pulled out of it. But as it was, he couldn't stop three damage from coming through - two of Gab's creatures were unblocked, and the Twigwalker enhanced them. Matt's Floating Shield was not enough defense.

Both players came out with 2/2's for 2 in the second game - Matt a Phantom Nomad and Gab an Ironshell Beetle. Matt made the sketchy play of "cycling" Keep Watch on his third turn, perhaps giving away that he had no real business in his hand.

Gab turned up the heat with an Arcane Teachings on the Beetle. Matt had a good play on his next turn, however, summoning forth a Wormfang Drake and hiding the puny little Nomad. Perhaps he had business after all.

Gab, with three forests and a mountain in play and an all-white grip, had nothing to do but serve with his 4/4. Matt looked to be winning the race once he cast Teroh's Faithful and then an Aven Flock. The real backbreaker came when Vienneau cast Churning Eddy on the Arcane Beetle and Gab's Mountain. There was no coming back from that.

Both players, for being on good terms, remained very focused an business-like attitute with no joking around during sideboarding. The gravity of their must-win situation was palpable.

Gab started with the aggressive turn-2 play of Seton's Scout, but Vienneau had the nightmare of all 2/1's, Aquamoeba. Gab put out a Mystic Familiar, hoping to take the battle to the air, but Matt was ready with Angelic Wall.

Gab had the Arcane Teachings in hand and dropped it onto the Scout. He couldn't attack, since it would fall to Aquamoeba. But Gab dealt with the Aquamoeba on his next turn with Thermal Blast and started attacking with the beefy 4/3 Scout.

Matt took three consecutive hits from the Scout, falling from 19 to 7. Matt was obviously very agitated with his lack of good draws, and let out a huge sigh of resignation at one point.

The sigh was supposed to mask the fact that he had drawn Chastise. Gab attacked with the Scout again, and Matt gave it a stern talking-to, gaining 4 life in the process. But Gab was one up on him, casting Auramancer to retrieve the Arcane Teachings. Matt had to crack a half-smile.

Vienneau: "Good card to have there." 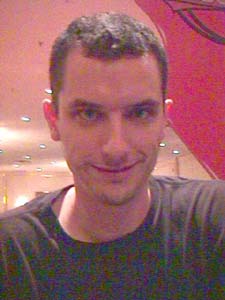 Gab put the Teachings on the Auramancer (as Churning Eddy protection), but Matt had a Sphere of Truth to slow the bleeding. The Auramancer could now no longer ping him to death, and had to attack.

Attacking wasn't really an issue, as the Auramancer was a mighty 4/4, plus he had a Twigwalker out. Ironshell Beetle came down, and things got really hairy for Vienneau.

Matt showed some real gamesmanship, however, in his quest to stay alive. He knew when to put out sacrificial lambs like Hallowed Healer, Phantom Nomad, and Millikin, buying him time to find stuff like his two Vigilant Sentries and Lieutenant Kirtar. Gab added a Wild Mongrel to his team, which Kirtar took care of. Matt got to threshold which turned his Sentries into blocking machines, but Gab was holding Lead Astray. He tapped both of Matt's Sentries and swung in for the kill.

Gab Tsang lives to fight another day. Matt Vienneau, on the other hand, has been eliminated, thanks in no part to drawing way too much land over the course of this match. The last time Gab eliminated Matt from Nationals was in 1997... Gab ended up making the team, and Canada became the only non-US team to win Worlds. Seems like a good precedent.