Round 10: Gab Tsang vs. Michael Gurney 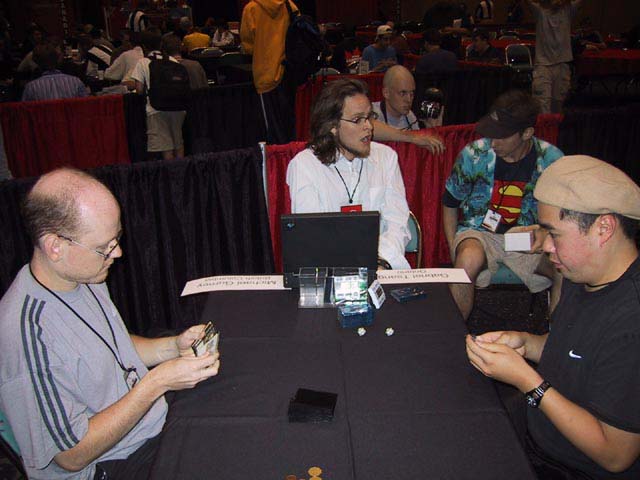 Gab Tsang is one of those old-school players well known throughout the Pro Tour. Perhaps best known as part of the money draft team including Igor Frayman and Brian Hacker, Tsang's best finishes herald back to 1997, where he finished 1st in the swiss at both Worlds and Pro Tour New York that year. Gurney is a new name to the Pro Tour scene, finishing in the Top 8 at the last Pro Tour Los Angeles. Both players are playing what are essentially control decks, though of very different varieties.

Without a single white source of mana, and now card drawing, Tsang mulliganed his opening hand. The initial turns of the game were slow, with Gurney having countermagic available before Tsang was able to cast his first threat. Gurney's hand was strong for the matchup, including a Vindicate, a pair of Wrath of God and counterspells. Tsang pulled a counter from Gurney's hand with a Defiant Falcon, holding back a couple of Meddling Mage, but Gurney's follow up turn included a Probe (without Kicker) placing a Nether Spirit into his grave.

One of the Meddling Mages came into play on the next turn, stopping Wrath of God - a vicious blow against Gurney. Gurney tried to find an answer with a second unkicked Probe. Though he had a Vindicate, Tsang's open mana was a good deterrent to the Vindicate. With the Nether Spirit holding the fort, Tsang was forced to sit back with his Mage on defense.

With countermagic available, Gurney attempted the first Vindicate, targeting not the Mage, but Tsang's sole source of White. Tsang laid a second white source, only to have it Vindicated again by Gurney. A third white source replaced the first two, and Gurney's hand was strong from the Probe action - multiple Dromar's Charms provided reasonable answers to Meddling Mage, and a Fact or Fiction provided Tsang with a tough choice: land, Misdirection, and another Fact or Fiction. Gurney ended up with three land and a Misdirection, giving him plenty of resources to fire off his barrage of countermagic.

The game remained stalled for several turns, with both players trying to build up resources. Finally, Gurney started on the offense, and the two players started trading damage. A Dromar's Charm and counterspell pulled two countermagic from Tsang's hand at the end of his turn, and left Tsang open to a second Dromar's Charm on the Meddling Mage on the next turn.

Tsang wasn't without choices. Holding back on the rebel chain, he placed his first piece of it into play, sitting back on a Ramosian Sergeant. Combined with a Brainstorm, he nabbed another Sergeant and shuffled away some useless cards, while Gurney built up for the inevitable war over Wrath of God with another Fact or Fiction. This was another rough choice, including a Probe, another Fact or Fiction, a Death Grasp, Tsabo's Web, and land. Gurney ended up with Fact or Fiction and Death Grasp, while Tsang sat back on his own card advantage with the rebel chain. Wrath of God failed to resolve, and Tsang's chain continued to grow, with a pair of rebels back in his hand, and a single Counterspell to stop the next Wrath. This time, Gurney had the counterspell to protect it, and Tsang used Lin Sivvi to return the Defiant Falcon to the bottom of the library before the spell swept the board and take a Rebel Informer out of his deck at the same time.

Tsang started over with a new Sergeant, and Gurney refilled with a Fact or Fiction, claiming a single Absorb for his trouble. A Vindicate answered the Sergeant, and an Absorb and Dromar's Charm took out the next Rebels, but Tsang still had a Lin Sivvi held back, prompting a surprised curse from Gurney. Gurney had the counterspell for it, but it drained him off his last counterspell. 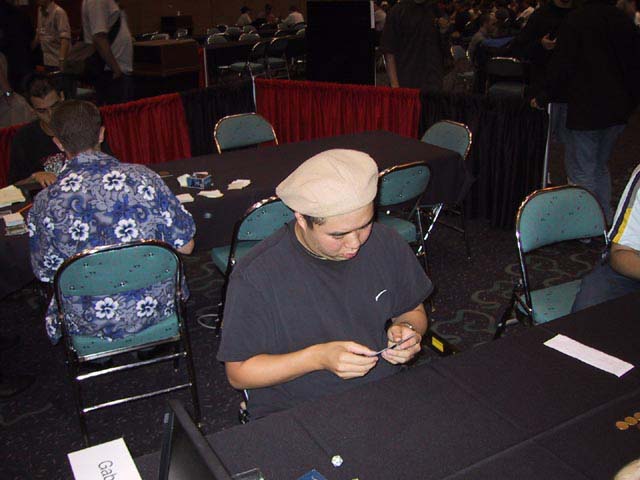 Going for the beatdown, Gurney dropped a second spirit, only to have a Parallax Wave hit play to take out his spirits. Low on life, Tsang still had to worry about the Death Grasp he knew to be in Gurney's hand, but he could only draw answers and no threats to turn the game around. When the Nether Spirits began their relentless march, Tsang could only scoop to continue to the next game.

SIDE: Gurney brought in Tsabo's Decree, Last Breath, and Juntu Stakes, while Tsang opts for Disrupts and Gainsay.

In the next game, it was Gurney's turn to double mulligan against Tsang's mostly control-based draw. Keeping a draw with heavy permission but no threats was a calculated risk for Tsang. Such draws could go rapidly out of control, but there is a reasonable chance to both draw into a threat, and then be in a position to hold control for the remainder of the game.

Tsang drew into the Lin-Sivvi, while Gurney failed to make a mana drop for several consecutive turns. Dropping out a Sky Marshal, and some other fliers, Tsang made short work of Gurney.

Gurney again had a mulligan hand, while Tsang had an excellent Ramosian Sergeant and multiple counterspell draw. Gurney's new hand couldn't be much better, with Juntu Stakes and Last Breath, as well as countermagic. The Stakes quickly locked down the Ramosian Sergeant, but wouldn't stop the newly summoned Defiant Vanguard, which met a quick end from Last Breath.

With no threats in play, and Gurney sitting behind four mana, and Countermagic, things looked rough for Tsang. A Disrupt on Fact or Fiction pulled him farther into contention, but Gurney was still in very good shape - Tsang had taken out his Disenchants. A Meddling Mage against Wrath of God put some pressure back onto Gurney, and Tsang was able to keep it on the table against a pair of Vindicates, clearing Gurney's hand in the ensuing counter-war.

A Brainstorm spelled bad news for Tsang. While his opponent had no cards in hand, he would have to spend the next two turns with only land in hand and on top of his deck. This gave Gurney a bit of breathing room, and he dropped a Nether Spirit onto the table, and used a Death Grasp to take out the Meddling Mage. 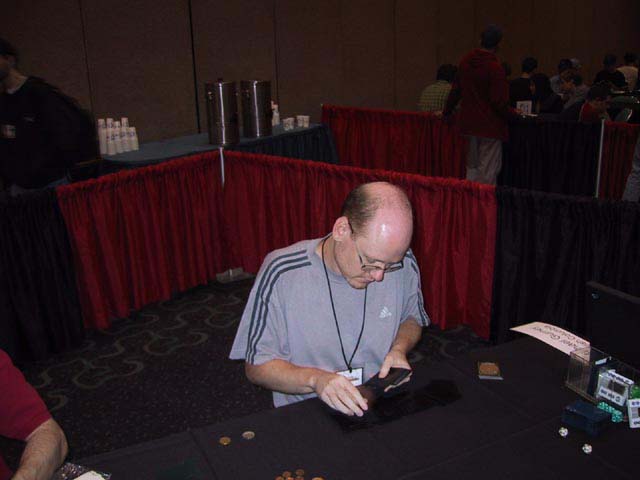 Tsang continued to sit on land and Gurney used a Fact or Fiction from the top to refill his hand with a punishing pair of Wrath of God and an Absorb revealed. Gurney ended up with the Absorb and a pair of land, and Tsang continued to draw yet more land. Even after drawing his first threat, he was still in trouble, knowing that an Absorb sat to protect Gurney from it. Another Nether Spirit joined the first, and Gurney played a Probe with Kicker to continue his assault. An impotent Ramosian Sergeant pulled one counter out of Gurney, and Lin Sivvi hit the table, though did not block the incoming Nether Spirits, just to stay safe from potentially damning Dromar's Charm. Hungry for more cards, Gurney used a Dismantling Blow with Kicker to destroy his own Juntu Stakes, and Tsang pulled back into contention able to use Lin Sivvi at will.

A new Fact or Fiction from Gurney may have saved the day, however. Revealing a Tsabo's Decree, Wrath of God and Counterspell, Gurney took the Decree alone, to push away all of the rebels from the table. Gurney went for the Decree, pushing it past a single Counterspell, and Tsang revealed his hand of land, and though he top-decked a Falcon, Gurney topped a Charm, and came through for the last damage.

4 Wrath of God 4 Fact or Fiction