Round 10: Gabriel Nassif vs. Christoph Lippert 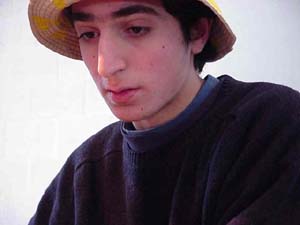 Nassif was playing a blue-white deck and got a typically defensive start when he dropped an Angelic Wall and then a Mystic Zealot on turn 4. Lippert got stuck on two land but was still able to administer beats with an Aquamoeba and Crypt Creeper after using Chainer's Edict to clear Nassif's Angelic Wall out of the way.

Nassif peeked and then dropped a Strength of Isolation on the Zealot and started to send it into the red zone. A Cephalid Aristocrat got in the way of an Aquamoeba and when Nassif used a Breakthrough to gain threshold the Frenchman looked to be in good shape.

Unfortunately Lippert Repelled the Zealot when Nassif had to hold it back to block to get damage in. Balshan Collaborator came into play and looked scary for only a small instant before Nassif turned it into a vanilla 2/2 flier with Stupefying Touch. The Organ Grinder that followed was a problem as Nassif was only at nine life.

A Mystic Zealot at threshold dissuaded Lippert from entering the red zone and Nassif was able to attack back with a Patrol Hounds.

It seemed like Nassif might hold onto the game when he used Cultural Exchange to swap a Patrol Hounds for the Organ Grinder. Unfortunately Lippert cast a Waste Away the next turn to remove the Zealot and then swung for victory with all his creatures.

Both players started with creatures on turn 2. Lippert was short of land again but still managed to play out Aquamoeba, Hydromorph Guardian and Cephalid Scout.

Nassif had a Patrol Hounds that he effectively made unblockable by giving it protection from blue with a Floating Shield. A flying Aven Archer gave him further evasion.

Lippert's mana problems meant he was forced to discard a Crippling Fatigue to an Aquamoeba just so he could play its flashback cost off his one swamp to kill the Archer. Nassif replaced it with a Hallowed Healer and Cephalid Scout.

Both sides then jockeyed for position as Nassif used Kirtar's Desire to deal with Lippert's Collaborator and Lippert found something that wasn't blue to block the shielded Patrol Hounds – a Dirty Wererat.

Nassif summoned a Mystic Zealot and then headed to threshold through the help of Think Tank, Obsessive Search and the Scout. He then started serving with a 3/5 flier. He popped the Floating Shield to prevent the Zealot from being bounced and then finished Lippert off with the security of a Shelter in his hand. 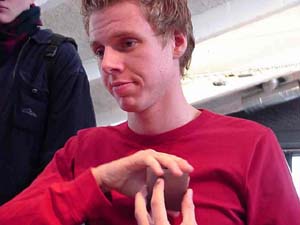 Christoph LippertTwo early Peeks ensured there would be no surprises. Lippert revealed he only had two land again but an Obsessive Search found enough land for him to lay a Dirty Wererat on turn 4. Nassif kept it under control with a Kirtar's Desire.

This time the deck looked to be working to plan for Lippert as a Waste Away disposed of Nassif's Zealot and then a Soul Scourge come into play.

Two Think Tanks got Nassif to threshold at lightning speed and he dropped a Hallowed Healer with Shelter back up to hold off the Scourge. He was drawing too much of his threshold gaining machinery and not enough threats as a Looter came into play.

Then there was a blistering exchange as Lippert tried to use a Zombie Assassin to remove the Healer. Nassif saved it by pulling off a madness trick with his Looter to drop Strength of Isolation on the Healer as an instant. Lippert went for his second Repel instead only for Nassif to turn it aside with a Syncopate.

The card quality from the Tanks and Looter was beginning to show as a second Kirtar's Desire shut down the Scourge and left Lippert with no attackers or blockers. Worried about whether he would have enough time or even cards left in his library Nassif had to attack so we were treated to the rare sight of a Hallowed Healer in the red zone.

It was effective as Lippert's mana problems switched from one extreme to another as he drew nothing but land and died to Looter, enchanted Healer and an Aven Archer.