Round 10: Gabriel Nassif vs. Farid Meraghni

With three rounds of swiss left these two Pro Tour fixtures have to go 2-1 to make the top eight, or perhaps even a win and two draws. The matchup should certainly favor Farid's Opposition deck over Gabriel's Tog deck. 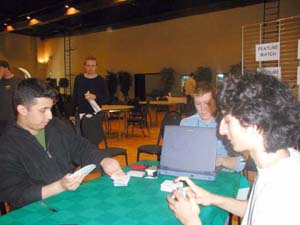 Both players had to take a mulligan, but Farid's six card draw was rather good in any case. He summoned a first turn Bird of Paradise, then put Squirrel Nests on Forests on both turns two and three. Gabriel Smothered the Bird and played a Psychatog.

He then Cabal Therapied away a Counterspell and a Cunning Wish. With two Squirrel Nests he was able to build an offensive force and chump-block the Tog each turn. Gabriel drew a handful of countermagic, and nothing that could deal with Squirrel Nest. Farid had also Quiet Speculationed for more Cabal Therapies, and flashed them back with Squirrels.

In a way the Cabal Therapy actually helped Gabriel, as it meant that there weren't enough squirrels to kill him before he got nine lands in play. Gabriel would actually have won with an Upheaval, but he couldn't find on in time even with the Compulsion. Farid repeatedly cast Cabal Therapy for irrelevant cards, but Gabriel wasn't able to take advantage.

Once again Farid sideboarded oddly. He again took out one of his Cabal Therapies, and all of his Oppositions. The general consensus after the match was that Therapy was much better than the Envelop he had brought in.

Gabriel played Compulsion on turn 2 and Duressed Farid's Squirrel Nest on his third turn. He tapped out for Concentrate which gave Farid chance to drop Phantom Centaur. Meraghni also Cabal Therapied Gabriel for Innocent Blood, but this missed as Nassif only had more card drawing.

Nassif played a second Concentrate and Zombie Infestation, which wasn't the most useful card in the situation. His next draw step was much more helpful – Hibernation. This gave him enough time to build up to seven lands, at which point he cast Upheaval and Zombie Infestation, then discarded six cards to make three 2/2 Zombies. Farid asked if he had any Counterspells and conceded when he was shown two Circular Logics.

Farid wisely decided to take out his Smothers and bring Opposition back in for the deciding game.

Gabriel played a Duress on turn one, showing that Farid had two Squirrel Nest. With only a Swamp in play, this meant that he would only be able to counter the second Nest with a Force Spike. Farid made this impossible as well by drawing a Llanowar Elf.

Nassif's Psychatog which held off Farid's attacks for a while. Unfortunately though, Gabriel was stuck with only three lands in play, as Farid built up a force of two Elephants and a bunch of Squirrels. Desperate to find more lands as the only way out of the position was to cast Upheaval, Gabriel Compulsed during his main phase, allowing Meraghni to resolve Opposition and ending the game.