Round 10: Gary Wise vs. Danny Mandel 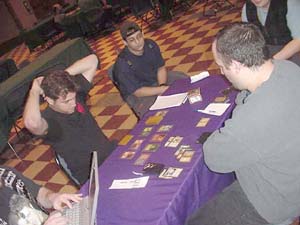 The two are well thought-of fixtures on the Pro Tour, but one is louder.

Gary Wise is well-known for his "Wise Words" column on The Sideboard, for testing with Ben Ronaldson and John Ormerod, and for a scattering of high finishes all over the globe.

Danny Mandel, a staple of the Your Move Games team, has had high finishes here and there - he came in 12th at Pro Tour: LA, and second at Grand Prix: Denver, but he still hasn't had the big prize yet. He did, however, meet his girlfriend at LA, so at least he has more compensation than many players get.

"We have the two best decks at the table," Wise said as he shuffled up.

"I just beat him," Wise clarified. "You're the bomb guy," he said slowly.

Danny rolled a four, but so did Wise. Danny then flung the die off the table for a non-counting six, which turned into a table-bound three, whereas Gary got a one.

"I should choose to draw and get my Spider," said Mandel.

But instead, he chose to go first. Danny kept, as did Wise. Mandel led off with a Forest and a mountain, casting Wirewood Elf; Gary, playing blue/white, cast a Glory Seeker, saying, "A little man. I told you playing first was important."

Gary cracked his knuckles while Danny considered his next move - then laid Mountain, Sparksmith, causing Gary to exclaim, "Well, maybe it wasn't important."

Gary attacked with the Glory Seeker and cast a Gustcloak Harrier; Mandel used the Elf to cycle a Mauler and entered his next turn, only to stall on three lands. He laid Nosy Goblin and used the Sparksmith to kill the Harrier, taking two points himself, then attacked back with his Wirewood Elf.

"Well, I did, but I just decided to hold it back. In case I draw my Seismic Assault."

Mandel drew no further land, either, and chose to Sparksmith Wise's untapped Glory Seeker... But a Piety Charm swelled the Soldier, forcing Mandel to take two for nothing. Ouch. Mandel flipped through his cards, trying to figure out what his optimal play was; technically, he was one land up on Gary thanks to the mana-producing capability of his Wirewood Elf, but he had to consider his options.

Ultimately, he laid a Wall of Mulch and passed the turn. Both Glory Seekers charged in, one of them meeting a wall, the other one meeting Mandel's face.

He laid a Morph and a Secluded Steppe, then passed.

Gary was tapped out, leaving everything vulnerable. Was he hoping to sucker Mandel into wasting the Sparksmith on a worthless Morph, or was it an even more elaborate sucker play? Mandel wasted the Glory Seeker instead, and used his Nosy Goblin to smash the Morph - a Disruptive Pitmage, which would have been insane in this low-mana game.

Mandel laid a morph and a Skirk Prospector but did not attack, while Gary laid another morph, and held back.

Gary had gotten up to five land by now, but Mandel was still at three. "Could you just lay a land and finish me?" asked Wise. Mandel did his best at three, attacking in with his morph; they traded without morphing. Wise's Riptide Biologist and Mandel's Birchlore Rangers hit the yard without a whimper.

Mandel laid another morph... And Wise knew that a Hystrodon was somewhere in Mandel's deck. He passed without attacking, and Danny used the Sparksmith to remove Wise's sole blocker at the end of the turn. Gary was facing down a morph, a Wirewood Elf, a Skirk Prospector, and a Sparksmith. Wise cycled a Choking Tethers to disrupt the morph, so Mandel had to settle for just the Prospector.

And the fourth mountain came down, causing Wise to mutter, "Uh-oh." Gary gamely cast a Daru Lancer as his only blocker, but the Sparksmith and a Solar Blast took it down.

"Do you have an Akroma's Vengeance?" asked Danny. 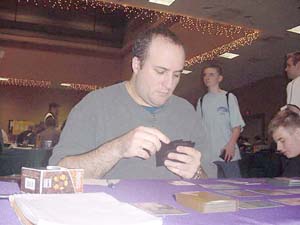 "Three," Wise replied. "I can't believe you don't remember that!"

Danny sent with everything, bringing Wise down to thirteen. Gary laid a sole morph, which looked pretty small in the face of the small army he was staring down.

Wise had an Ascending Aven in his hand and thought he had had a chance if he had drawn the land to cast it two turns earlier... But as it turned out, Danny had the Explosion in hand and probably would have taken it out. His other remaining morph was a Hystrodon, so Gary was in trouble no matter what.

"This is the only deck at the table I didn't want to play," said Wise, gesturing at Danny. "He has Sparksmith and the Spider, which pretty much shuts me down. Not to mention bombs like Contested Cliffs, Hystrodon, and Tephraderm."

"You're gonna go first," Mandel predicted. "I'm gonna write that down, and I'll be correct. But we should go get food."

"I think we should play out the match first," Wise replied.

"I guess that's not a bad idea, either," said Mandel.

Wise sucked air through his teeth, but kept. He started out with an island and a cycled Lonely Sandbar, then laid another island, indicating possible manascrew.

"I don't remember seeing any Counterspells," said Mandel devilishly, looking at the two untapped islands - the bane of Constructed players everywhere. Mandel, getting all the land he seemingly needed, then boldly laid a Sparksmith.

Gary laid a plains, though, getting up to full domain for his deck. Mandel continued the assault with a Nosy Goblin... But Wise played Chain of Vapor on the Sparksmith in response, bouncing it. Mandel chose not to copy it, passing the turn, and Gary laid Mistform Dreamer - which Mandel met with a cycled Solar Blast/Zap, which he followed up with a Goblin Taskmaster.

Gary took it in stride. "I would call that the nuts draw, wouldn't you? Sparksmith is bad," he said blandly, looking at the board critically. "Spider I can't deal with, Sparksmith and Spider is impossible."

Mandel sent the Spider in, then laid Flamestick Courier to add salt to the Goblin beats' hurting. At the end of the turn, Wise unmorphed a Daru Lancer, then laid a Glory Seeker and a Crown of Awe on the Lancer - causing Mandel to respond, "I knew I should've killed that guy."

"I have the upper hand here," said Wise sarcastically, chuckling. "I mean, you're down to twenty, right?"

"Neat," said Mandel boyishly, as he topdecked Treespring Lorian, adding massive and overwhelming firepower to his team. Gary wished fervently that the Crown of Awe gave protection from Green, and he massaged his temples, trying to find an answer in his deck. Instead, he cycled Choking Tethers at the end of his turn, tapping the Courier, and laid a Dispersing Orb - a good answer when you're ahead, but Gary was behind on permanents.

Mandel used a Contested Cliffs to try and axe the Glory Seeker with the Lorian, but Gary had the Piety Charm to force a trade. 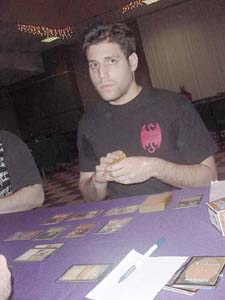 Mandel laid a morph, bringing his total of creatures up to six - half of them red - while Gary had a sole Lancer. He chose not to attack, waiting for the blitz; trying to regain position, Gary laid the 6/6 Aven Fateshaper - which the Silklash Spider promptly swept away, and Mandel started in on the assault at last by unmorphing a Hystrodon and sending in with all of his green creatures. Gary had blocked the morph, though, anticipating the move, but still took seven damage.

Gary cast an Ascending Aven, but had no cards. Mandel picked up on this instantly. "How many cards?" he asked, not believing his good luck.

"No cards," sighed Wise, who was also tapped out, leaving him utterly helpless. "Kill me now."

Mandel did his best by using the Spider yet again to kill the Aven, then attacked with everything but the Wirewood Elf. Wise blocked the Courier glumly, going down to five.

"Three Akroma's Vengeances, remember?" asked Wise, wishing he had so much as one.

Mandel laid a Taunting Elf to add insult to injury to fatal beatings to salt rubbed in wounds.

Gary attacked with his Lancer into the now-tapped army, and Mandel took it - Gary then passed the turn after casting nothing and not conceding.

"I'm not gonna lie," said Gary. "Some of them might get tapped." And of course he had the Choking Tethers, tapping all but the Wirewood Elf.

"This is ridiculous," said Mandel, chuckling. "I still have gas!" he said, pointing to five cards, all waiting.

"I'm gonna make you sit here and starve," said Gary. "I'll stall 'til the end. No food for you. Starve!"

But he conceded anyway,

"I don't think I should have cycled that early land," said Wise. "I had the big flier in my hand in Game 2, and that was my only way to win. I shouldn't have thrown away a land, I needed to ramp to that."

"I knew if I had the Spider, he'd be in trouble," said Mandel.

It didn't seem to cost him, though, as he took the game anyway.