Round 10: Gary Wise vs. Noah Boeken 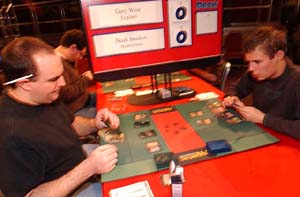 So begins another saga in the Gary Wise/ABU rivalry. Boeken is a teammate of Ryan Fuller and Chris Benafel, two players who don't exactly "get along" with Wise. There didn't seem to be too much animosity here, as Wise extended his hand to Boeken before the match and told him, "I'll shake your hand, and I hope we have a good game". Wise is running an odd archetype, with many Chatter of the Squirrel, Rites of Initiation, and Overrun. This deck is capable of a turn four kill, and while the strategy can be fragile, it is absolutely vicious when it comes together.

Wise started off fast with Chatter of the Squirrel on turn one, and flashed it back on turn two. Boeken played a Werebear, while Wise smashed with his squirrels, and continued his curve with Leaf Dancer. Boeken brought out Krosan Archer to stop most of the beats, but Leaf Dancer was still able to come through for two points of damage. Wise continued his curve to turn four with Springing Tiger, while Boeken played his own. Wise sent his Tiger and Dancer into the Red Zone, and Boeken blocked and traded with his own Tiger. Wise then played another Chatter, and flashed it back to give him a total of four squirrels. Blazing Salvo took down the Werebear, as Boeken did not feel that five life was a good price to pay against Wise's ultra-aggro deck.

Boeken played a Squirrel Nest, and joked that he was "Waiting for Squirrel Mob". Wise attacked with his whole team and used his third Chatter of the game to make two more squirrels. Boeken brought out Barbarian Lunatic, which blocked a squirrel. He tried to shoot down the Leaf Dancer, but Wise had Muscle Burst. On the next turn the game was over, as Boeken died to a swarm of squirrels.

Wise had to mulligan his opening hand and complained, "I drew Dwarven Grunt too! My mountainwalker was going to go all the way." Boeken started first with Diligent Farmhand, while Wise played Chatter, followed by Werebear. There was a bit of confusion after shuffling when the Farmhand was activated, since two cards were facing a different way. A judge picked up the deck, and rearranged the cards to face the same way. Boeken knocked on his deck and declared "Accumulated Knowledge!" before drawing, and Wise said "A Dave Williams joke!" 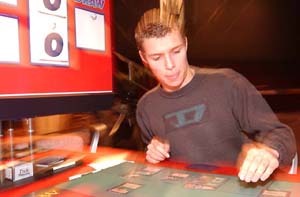 A Chainflinger showed up on Boeken's side, but was quickly Firebolted. Squirrel Nest showed up on Boeken's side, and was followed by Springing Tiger. Blazing Salvo targeted the Tiger, and Boeken took five damage. The Tiger attacked for three, and Rabid Elephant came down. At this point in the game, Boeken was well stabilized and his monsters were in charge, while Wise simply had two squirrels. Boeken drew a third forest, declared "Look what I found!" and played his Overrun. Wise noted, "I don't think he even needed Overrun". Boeken told Fuller who was across the Feature Match area, "I just played Overrun on...someone."

Wise sideboarded out two Rites of Initiation, bringing in Moment's Peace as an Overrun answer, and Steam Vines as a Squirrel Nest answer. He also noted that he should have sideboarded that way for Game 2.

Wise asked Boeken if Kamiel Cornelissen is a cheater, in reference to the and Boeken said "Of course he cheats. He wins."

Wise busted out turn one Farmhand, and Boeken brought out Woodland Druid, declaring "Wall of Steel!" Wise admitted, "It's actually really good against my deck" Druid Lyrist joined Wise's side, and he said go. Krosan Avenger was summoned and attacked on the following turn, and was unblocked. Wise noted, "See, you need to save the Woodland Druid to take down my other creatures!" Worth Wollpert walked by and told Mark Rosewater and Randy Buehler "Look at the board." Wise told the onlooking crowd "When he drafted the Woodland Druid, he pointed to me!"

Dwarven Grunt and a squirrel joined Wise's side, and his entire team entered the Red Zone on the following turn. Woodland Druid blocked Druid Lyrist, and Boeken's Krosan Archer blocked Krosan Avenger. Wise had Muscle Burst, which killed off the Archer due to Boeken being tapped out. A Blazing Salvo targeted Springing Tiger, dealing five damage to the dome. A dejected Boeken told his opponent "This is the worst deck I've ever seen." The Avenger traded with the Tiger, leaving the board as squirrel, Dwarven Grunt and Farmhand on Wise's side, and Woodland Druid on Boeken's side. 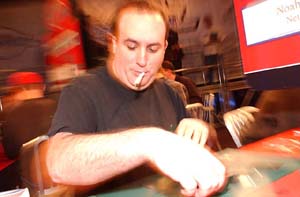 Do not adjust your monitor. This really is the Pro Tour.