Round 10: Gerard Fabiano vs. Ken Krouner 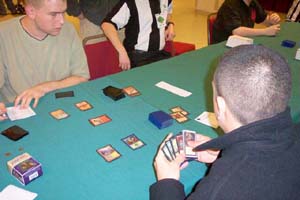 As we all sat down in the feature match area, Gerard Fabiano bemoaned the lack of name recognition of both himself and his friend (and now opponent) Ken Krouner. "Nobody every knows who we are, even though we've been doing well for a while now. We play together all the time and usually test for the Tour together. Just tell everyone that I finished in the top eight of worlds and then lost because I played horribly", said Fabiano. "And tell them that I finished in the top four at the last team Pro Tour", joked Ken Krouner.

The story of Gerard's first wild night in New Orleans has become almost an instant legend. I asked him to tell me that story. "So I was going to sing on stage (at the Cat's Meow, a local karaoke bar for college students on Bourbon Street) and I picked the song "It's Raining Men". No one else wanted to get on stage with me so I started going nuts, just belting it out—and these three really hot girls started jumping up on stage and pressing themselves against me, while others were grabbing my legs from off the stage."

Gerard won the coin flip, and chose to play. Without looking at his opening seven cards, he made a handsome offer to Ken. "I'll say I keep if you say you keep." Grinning, Ken replied, "I don't know if that works in my favor." "Sure it does!" But Ken insisted on playing a game of skill instead of a game of luck, and looked at his opening seven. Both players kept, with Gerard casting a first turn Duress to knock Seal of Fire out Ken's hand. "I didn't know if you were playing Psychatog or Oath," commented Ken, "but I guess you're Oath." "No way, I'm Psychatog with Duress main."

After the aforementioned discard spell, Ken was left with a fairly weak hand of double sacland, Rishadan Port, Mogg Fanatic, Blistering Firecat, and Lava Dart. His first turn Fanatic was met with a second turn Wall of Blossoms, and even though Ken top-decked Volcanic Hammer to deal lethal post-blocking damage to the 0/4 creature, he couldn't get much of an offense going. A third turn Yavimaya Elder on Fabiano's board died to Lava Dart, nabbing three lands for Gerard.

Ken attempted to get into high gear with a Jackal Pup, but Togit member Fabiano simply wiped the board clean with Pernicious Deed. A face-down Firecat died to Bone Shredder, while Ken stayed in the game for a couple more turns out of courtesy, he scooped shortly after Ravenous Baloth hit the table. 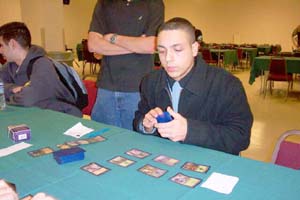 "I've never beat Gerard before.", bemoaned the tall, bleached-blonde Krouner. "Pro Tours, qualifiers, anywhere, I can't win. I don't think I've even beaten him ever in a money draft." "Well," replied Gerard, "I remember back when I first started playing, I thought you were Jon Finkel because of your hair. I watched the decks you were playing, and then went home and copied them."

Ken proceeded to side in all fifteen cards.

"When this match is over," suggested Gerard, "we should just sit here and pretend to play a game, so we get a large crowd—except that we'll play as badly as we possibly can so people can pass by and say 'those two guys are awful!'"

"How is that different than our real games?", inquired Ken jokingly.

This time, the game ran completely lopsided in Ken's favor. He led with a first turn Jackal Pup, second turn Rishadan Port, third turn Wasteland to kill a Treetop Village, fourth turn Wasteland to kill Volrath's Stronghold, fifth turn second Port, Grim Lavamancer. By the end of this sequence, Gerard was left reeling, discarding, and distraught. After a couple of turns of hopeless lingering, he scooped up his cards.

Ken: "Now that's why they call it Red Deck wins."

Ken: "I can feel it—I can feel my first win against you ever Gerard. I can smell it!"
Gerard: "That was me. I farted."

Once again, Gerard led with a first turn Duress, this time sending Tangle Wire to the grave. This left Ken with double Jackal Pup, Lavamancer, Mountain, Blistering Firecat and Rishadan Port. The first doggy died to Smother, the Lavamancer kicked the bucket a-la Terror, and Gerard established an early defense with Yavimaya Elder, Wall of Blossoms and Bottle Gnomes. 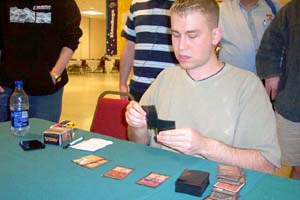 Meanwhile in Kenland, Mountains were not generously forthcoming. Two Firecats were forced to come into play face down, one of them eventually trading for a newly cast Genesis. Suddenly, Gerard called a judge over to the match.

Gerard: "If Blistering Firecat comes into play, can it be face down?"
Judge: "If you cast it, yes."
Gerard: "What if you bring it into play from somewhere else."
Judge: "What do you mean?"
Gerard: (Overemphasizing his words) "Let's pretend that I cast a spell like, say, Living Death..."
Judge: "Then the Firecat has to come into play face up"

Gerard responded to this ruling by casting Vampiric Tutor. One Living Death later, he was given back Genesis, Bottle Gnomes and Yavimaya Elder, while Ken ended up with the less-favorable Jackal Pup, Grim Lavamancer, and Blistering Firecat (which did at the end of that turn). Three turns later, turns filled Diabolic Edicts and 4/4 creatures turning sideways, Gerard concluded sealing his infinite win streak against Ken.