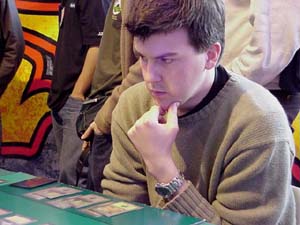 Mello played first and had a much faster draw to boot. He summoned a second turn Crypt Creeper and a third turn Torturer, but failed to lay a fourth land. Wiegersma did not cast a spell till his fourth turn at which point he was able to use Innocent Blood to get rid of the Creeper.

Still mana hosed, Mello watched helplessly as Wiegersma summoned his first creature – a Soul Scourge. Mello cycled an Afflict on it, but did not have the fourth land to kill it off. He did finally draw a Forest off the Afflict and cast a second Afflict, this time combining it with the Torturer to take out the 3/2 flyer. Unfazed, Wiegersma summoned a Dirty Wererat. Wiegersma used Morbid Hunger to take out the Torturer, but Mello was now summoning his big green bruisers – Rabid Elephant and Centaur Chieftain were on the prowl.

Rather than tap out for the second Hunger he was holding, Wiegersma chose to summon a pair of creatures to race with. Krosan Archer and Dusk Imp entered play only to doubleblock the Chieftain. Mello had no effects, taking out the Archer. He then cast Gravedigger, retrieving the 3/3 haste creature back to his hand and using the remaining two lands to summon Filthy Cur.

Wiegersma enchanted Dirty Wererat with Shade's Form and summoned a Farnished Ghoul. This gave Mello pause, and he pondered the next play for a few moments. Eventually he decided on an aggressive course of action, summoning Centaur Chieftain and turning all of his creatures sideways. When smoke cleared, only Dirty Wererat and Rabid Elephant were left in play, staring each other down.

Wiegersma went aggro at this point. He cast Morbid Hunger targeting Mello and reaching threshold, then attacked, pumping the remaining mana into the Rat and evening the life totals. It was looking as though Wiegersma was ahead for the first time this game, but Mello did not disappoint the spectators on the following turn. He cast Chainer's Edict, getting rid of the Shade's Form and summoned Gravedigger. As he did not have that many turns, he did not go for the Digger recursion, choosing to reanimate a Centaur Chieftain right away instead. He now had Threshold, making the Chieftain even more attractive.

Mello chump-blocked with Gravedigger, then cast Centaur and attacked for the win.

Wiegersma chose to play second, but his draw was not nearly as slow this time. Although Mello was the one to play the first spell, summoning a Dilligent Farmhand, Wiegersma matched with Werebear. Mello Afflicted, and Wiegersma summoned a Krosan Avenger. Mello's draw seemed tailor-made for this as he cast Cabal Torturer. Wiegermsa failed to play the fourth land in order to cast the Patriarch's Desire he was holding, and that was the end of Krosan Avenger. 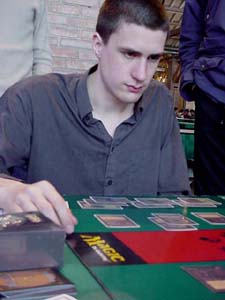 On the following turn, Mello summoned Centaur Chieftain, increasing the pressure against the Dutch player. Having finally drawn his fourth land, Wiegersma cast a Dirty Wererat, but he was still lacking a way to stop his opponent's threats. When the Rat blocked a Dilligent Farmhand, Mello used his second Afflict and the Torturer to finish it off. Wiegersma used Patriarch's Desire to kill the Torturer and went down to seven life points.

Mello attempted to get back Cabal Torturer with Gravedigger, but Wiegersma had the Coffin Purge he boarded in at the ready. He also managed to draw a sixth land and cast Morbid Hunger to take out the Chieftain, going back up to ten life points. It helped Wiegersma that his opponent was playing around Mutilate, not summoning all the creatures in his hand. On his turn Mello cast an Anurid Scavenger, but did not also play a Crypt Creeper. In answer, Wiegersma cast a Farnished Ghoul.

Mello cast Vivify on a Swamp, attacking with all of his creatures. Ghoul blocked a Gravedigger and removed two more cards out of his opponent's graveyard once damage was put on the stack. Mello finally summoned a Crypt Creeper (had he cast it before, the game would end this turn) with Wiegersma down to two life points.

Unable to deal with both of Mello's creatures next turn, Wiegersma bluffed. He cast Morgue Theft, targeting Werebear and got Mello to remove it from the game with Crypt Creeper in response. That bought him another turn to top-deck an answer, as a Krosan Archer chump blocked the toad-looking Beast.

Next turn Wiegersma had nothing to throw in front of Anurid Scavenger, so he cast Unhinge hoping to draw into an answer. He drew Gurzigost but had no mana to cast it that turn, game and match going to Mello.