Round 10: Jens Thorén vs. Yuri Kolomeyko 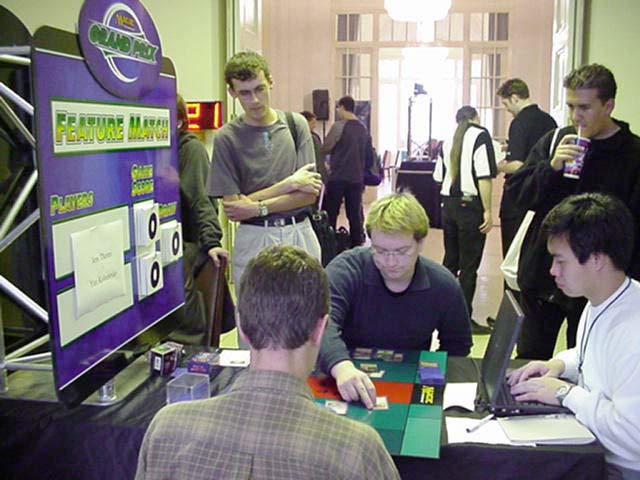 Both Jens and Yuri are at 7-2 at the start of this round. While Jens started off the day fighting for the points, Yuri had an easy time having a bye. Jens and Yuri both know each other's deck pretty well as they were sitting next to each other during the draft. Jens plays a G/W/u deck with some good creatures, the Basilisk and the Wind Chaser as the big finishers. Yuri plays a U/W deck with lots of fliers, and Persuasion can definitely be a game-breaker.

Jens decided to play after winning the dice roll. He started off with the original green mana acceleration, Forest, Diligent Farmhand, as Yuri Peeked through his hand. 20-19, Thorén played the Hound. 20-16. Yuri just played Plains and passed the turn right back. Jens then sacked the Farmland to fetch the awaited Island. Jens put in the Aven Windchaser. Yuri's Cephalid Broker in answer proved to be one of the best cards in this format. Thorén 'Seton's Desire'ed his Hound, making it a 4/4, and attacked with it, 20-7. After he finished attacking, he drops the tapper Nomad Decoy. Things looked good for Jens at this point.

Yuri tapped out to play Persuasion on the tapper, hence balancing the game a bit. Jens who didn't seem to worry about what just happened, put his creatures into the red zone. Yuri blocked the Hound with the Cephalid and activated its ability to find a solution for the game. Jens gave the Hound first strike, killing the Cephalid and Windreader took Yuri down to four. Jens checked Yuri's top card: Mystic Visionary, and Yuri played it out on his turn to chump the Hound with Seton's Desire on it. Thorén then played the Krosan Archer, trying to seal the game, knowing Yuri's top card is a Plains. However Yuri has an Aven Flock to block and survive for one more turn. Yuri drew a Hound, which both players knew would come. 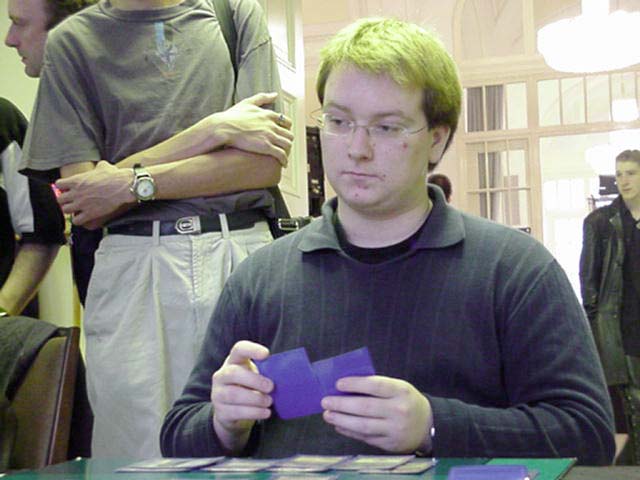 Yuri played out two more creatures, hoping to stabilize the game as Thorén plays his Elephant Ambush at the end of his turn. The Hound dies of blocking the Elephant. Thorén then plays a Visionary. Thorén has the Ambush in his graveyard but opting to play the big bad Basilisk during his turn instead, a definitely better call. As Yuri taps down the Basilisk during his next turn, Jens passes the turn. He then plays the elephant at the end of Yuri's next end of turn step from the graveyard to seal the game, and this time for sure as Yuri scoops up his card.

Kolomeyko decided to start the second game, kicking things off with an Auramancer on turn three, Thorén replied with a Visionary. The two trade the creatures during Jens' next attack, after which Jens played the tapper following by Yuri's own Visionary. The tapper then does its job tapping down the Visionary; Thorén Syncopates the Aven Windchaser, but has to let a Cephalid through, repelling it in the end of turn step. Thorén kept playing out lands for a while and could finally afford his Basilisk. He attacked with the Basilisk on the next turn. Yuri decided to block with the Visionary, powering it up with Gallantry and so making it a 6/5 creature. Thorén let the Gallantry resolve, then Muscle Bursting the Basilisk. Yuri activated the Cephalid and Peeked without finding the answer to that. The damage resolved with a big Visionary hitting the graveyard.

Thorén played the desire on the Basilisk during the next turn and attacked for the first damage, 20-14, he then took two damage back from Yuri's attacking creature. One more attack phase and the standing was at 14-14, as Jens' Basilisk repelled after being Seton's Desired. Yuri played the Scrivener taking back the Gallantry. Jens played out the Basilisk once again. Aven Snokeweaver joined the game. Jens discarded two cards on the Hound during his attack phase to get threshold, forcing Yuri to use the Embolden from the graveyard to save his must-block-the-Basilisk creatures. Thorén played the Windchaser trying to stabilize the situation as Yuri had an overwhelming number of creatures.

With only ten minutes left on the round, Yuri played a Healer. Jens played one of his own immediately afterwards. Yuri at this moment had seventeen cards left in his library. There were many more creatures left in his deck and together with the Persuasion in his hand, he could actually pull off a win in this game, which would give him the quite important point of this round.

Jens was at four after Yuri's attack when the Mystic Zealot came into play from Yuri's side. Jens passed the turn right back, hoping to pressure Yuri into making mistakes, but Yuri activated the Cephalid - unafraid of getting to his best cards.

Yuri knew that Thorén had a Ray of Distortion in hand (from the Peek he has played at the very beginning of the game), but was not sure of its casting cost. Jens had one white mana untapped at this time. Playing the Persuasion at the right time proved crucial at this point in the game. Time was called as Yuri had seven cards left in his library.

Yuri planned his final attack, but he wasn't strong enough to win. He smartly refused to attack and played two more creatures, then passed the turn. There's not much action from Jens' side of the table. Yuri - after consulting with a nearby judge about summoning sickness of creatures - played the Persuasion on the Healer. Jens activated it to prevent the next four points of damage dealt to him, and tapped two of Yuri's flyers. But Yuri's force proved to be just enough to cope the final damage. Yuri moved all his creatures into the red-zone, evening the match as 1-1 a piece.