Round 10: Jim Herold vs. Helmut Summersberger 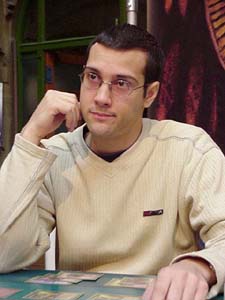 They wished each other luck and went on their way. Helmut bravely kept a hand of two Mountains holding two Wild Mongrels and a Flametongue Kavu. Jim on the other hand didn't want to take any chances and mulliganed once.

Summersberger failed to draw a Forest until his third turn and cast one of his two Wild Mongrels. Herold summoned a Merfolk Looter and cast a Fiery Temper on the opposing creature. Summersberger saved it by pitching a Rootwalla and his second Mongrel. The Austrian had no more cards in his hand after killing off an Aquamoeba and casting Flametongue Kavu targeting his opponent's Looter. The German didn't have any creatures on the board but managed to kill some of his opponent's.

A Kavu entered play on the other side of the board and killed Helmut's flashbacked Elephant. Herold somehow managed to play Roar of the Wurm to slow down the Austrian's attack wave and decided to charge with it the next turn instead.

Summersberger then used that opportunity to swing once again at Jim.
Surprise was when Herold cast an Arrogant Wurm to block a Wild Mongrel leaving him at three life. The German managed to resist and was even one turn away from victory but the Lavamancer did its job and guaranteed the first game for Summersberger.

Helmut got a Forest out on turn one. A stunt he hadn't pulled the entire day and cast his Rootwalla. 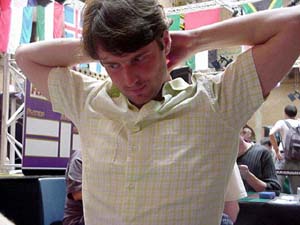 The Austrian attacked with a Rootwalla and the Aquamoeba switched power to stop it. Helmut had a Roar of the wurm in his Graveyard and cast it the next turn. The 6/6 is the biggest problem for the Austrian who had just a Mongrel and a Lavamancer on the table.

When Herold attacked with his Wurm, his opponent blocked with Wild Mongrel and cast a Fiery Temper via discard to kill the Wurm. When the Temper was target of Logic, the Austrian discarded his hand but one card to trade with the wurm.

Herold on the other hand drew another Roar of the Wurm and cast it for it's full casting cost and Helmut scooped.

Once again Herold was able to put a Roar of the Wurm into his graveyard. Wild Mongrel was to be seen on each side of the table. Summersberger tried to summon a Kavu bit the wake Jim didn't let it pass. Shortly after, the Wurm entered play.

The Austrian attacked with an Elephant a Mongrel and a Rootwalla holding a Violent Eruption in his hand. In the end only the Elephant survived. Helmut cast a Call of the Herd from his graveyard and a Lavamancer only to see both his Elephants getting bounced back to his hand with Rushing River.

Summersberger was still in control of the game and kept attacking just keeping his Lavamancer in the back. Jim only saw another Roar too late and scooped when there was nothing he could do.