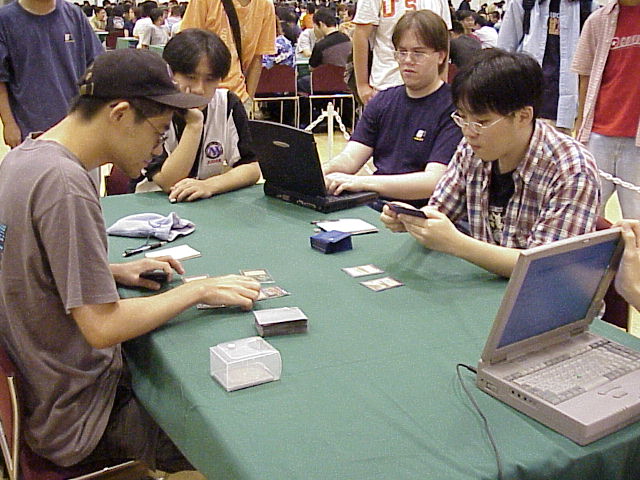 Day 2 started with stillness around the hall, in stark contrast to the seething masses of Day 1. Only 128 players remain from a field of 1350. Itaru Ishida boasts a top reputation as the evil genius behind the renowned Panzer Hunters team. While his individual efforts have not borne much fruit recently, he did manage to help Rookie of the Year Katsuhiro Mori reach the finals of GP: Taipei with their one-shot team Anchans. Jinpei Hassaku of Kyoto, no stranger to the big time himself, has 3 Pro Tours under his belt. At 8-1, a win here would be a major step towards achieving the top 8.

Ishida was packing a controlling red, white, and blue concoction that ran Lightning Angels and Goblin Trenches to pose a creature threat. Urza's Rages, Fire/Ice, Absorb, and the popular Exclude/Repulse combination rounded out his tools for victory. Hassaku's deck strongly resembled the hot "Rocket Shoes" deck that exploded at Pro Tour Tokyo, packing beasts like Blurred Mongoose, Thornscape Familiar, Raging Kavu, and Kavu Titan, and the potent burn of Fire/Ice and Urza's Rage to help finish the job. The inclusion of a blue splash for Repulse offered the ability to control the board tempo in spades.

If a spectator sneezed, they would have been unable to watch game 1. Hassaku won the fight of Jan-ken-pon, slashing his scissors through Ishida's flimsy paper. Hassaku let a faint smirk leak from his poker face as he led with an unkicked Kavu Titan followed by a Blurred Mongoose. Ishida Repulsed the Titan and despite Jinpei's deck refusing to cough up a third land on turn 3 and 4, a second Mongoose and a recast Kavu Titan joined the fray as Hassaku laid down his third land. Ishida's cool didn't waver even though an end of turn Raging Kavu appeared to join in the relentless beatdown.

Ishida Repulsed the Raging Kavu to buy a few more precious life points and Jinpei decided to go directly for the face and used 2 Urza's Rages to finish the job, playing around a potentially disastrous sorcery speed Rout. Three minutes and forty-eight seconds were all it took for Hassaku to finish the job.

Both players sideboarded in silence. Ishida knew that he needed to try to clear Hassaku's board without taking too much damage, and sideboarded in Lightning Angels that would serve as both potent blockers and damage dealers as well as Breath of Darigaaz to clear the board. If Hassaku could get the fast rush set up, Ishida knew he was finished. But the advantage appeared to lay with Ishida.

In Game 2 Hassaku played a Coastal Reef, showing that he actually wasn't playing a purist version of Rocket Shoes. Ishida Repulsed the early Thornscape Familiar, but a Raging Kavu came in to stand in the Familiar's Place. Hassaku then recast his Thornscape Familiar and dropped a second one. An end of turn Ishida Fact or Fiction netted him a Repulse and 3 lands over a single Goblin Trenches, and Ishida used Fire to clear away the Raging Kavu and one of the Familiar brethren. The crowd knew that Ishida's full hand spelled serious trouble for Hassaku, whose flood of fast offense had trickled down to a quiet stream.

Suspicions were confirmed as Ishida Fired from the hip to clear away the single Familiar that had bloodied him and ping his opponent, leaving Hassaku with a clear board. A topdecked, seemingly unanswerable Blurred Mongoose was met by Ishida's sideboarded Breath of Darigaaz. Ishida again Fact and Fictioned to reveal 2 Excludes, a Fire/Ice, a third Fact or Fiction, and a land. He grabbed the pile of Fire/Ice and Fact or Fiction. The Fire fricasseed Hassaku's newly cast Thornscape Familiar and then Hassaku's kicked Kavu Titan was shown the door with Exclude. Hassaku's expression was stern as he saw his chances for a fast victory slowly slide into the gutter. 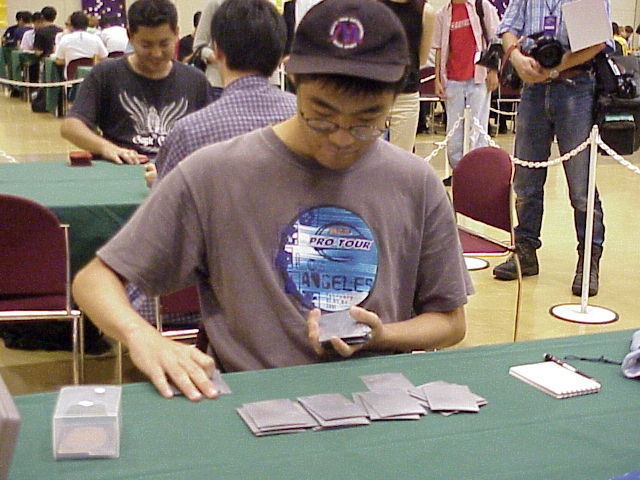 From that point on out, Ishida's bid for total domination unfolded. His first chance at offense, a Meddling Mage, met Hassaku's own Fire. Ishida then used his third Fact or Fiction to turn over 3 lands, a Repulse, and an Urza's Rage. Hassaku split the piles into Rage and 1 land, and Repulse and 2 lands. Ishida took the potent finisher and followed up with a double kicked Rakavolver. Hassaku was visibly upset at the flying fattie that would fix Ishida's life situation. Hassaku added a Raging Kavu to try to swing back into the game, but a few turns and an Urza's Rage crushed those hopes.

30 minutes were left on the clock for Round 3. Neither player deigned to touch their sideboard. Hassaku kicked off after mulliganing. 2 Thornscape Familiars were grasped by the fury of Ishida's vicious Fire. Hassaku's prospects dimmed as he played forest after forest, unable to outdraw Ishida's hand of answers and lacking red mana to cast his Raging Kavu.

Hassaku's kicked Kavu Titan was pushed away with an Exclude. With no play on Hassaku's sixth turn, Ishida Fact or Fictioned into an Urza's Rage and Absorb, choosing not to take 3 lands. Ishida's stock continued to rise with a Meddling Mage naming Blurred Mongoose. Hassaku acquired a Keldon Necropolis and after that finally found a Mountain, but Ishida's Goblin Trenches turned the situation to an ugly mess.

Hassaku decided to kill a Goblin and throw the Kavu at the Meddling mage with the Keldon Necropolis. Ishida sacrificed down to 5 land to keep an army of 5 Goblin tokens on the table. Another Raging Kavu came out, but it was far too little, far too late and Ishida's Goblin Soldiers bought him the win.