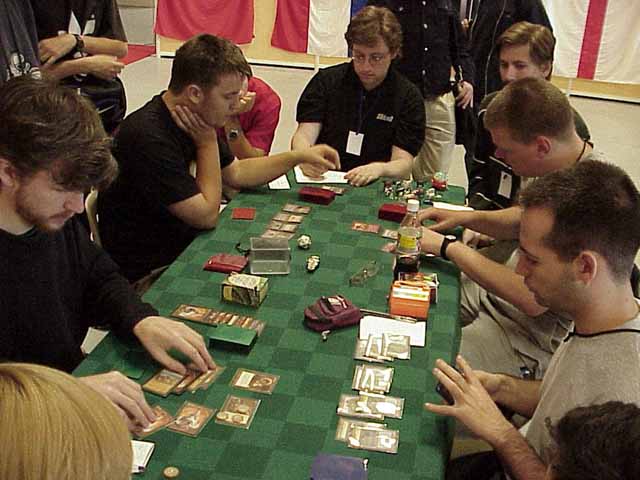 We met John Ormerod and his Wildfire deck in the round Seven feature Match. Carlos is playing a Mono-Blue control deck - often called Accelerated Blue - which has Grim Monoliths to speed up the casting of Morphlings and large Strokes of Genius. He won Grand Prix Madrid this year and has made the Spanish team on the last two occasions.

John chooses to first and while they both build up the lands in play, Carlos frustrates John's attempts to build a good mana base by countering two Thran Dynamos. He doesn't counterspell a less important pair of Fire Diamonds, as he has a Powder Keg.

As they continue to build up land a Wildfire is countered. Both players have Rishadan Ports but John has a Dust Bowl as well, allowing him to gradually remove Carlos' ports. This type of slow game really favors the Spaniard, as he has great cards for a long match. John doesn't find any way of getting his threats through as first a Temporal Aperture and then a Mishra's Helix are countered. Carlos waits until he has plenty of land and casts a Morphling. There's no way John can deal with it and two turns later he concedes. John really needs to get a good start and find some way of forcing through a threat. He had a chance to get the Aperture on the table in this game, as he had reduced Carlos to only one untapped Island, but Carlos had a main deck Annul for it.

John's sideboard is great here, though, as he has eleven cards to bring in. Mogg Salvages are good in this match-up to deal with the Powder Kegs and Grim Monoliths, and Tectonic Breaks and Boils hopefully stunt his opponents mana enough to get a threat like a Helix or an Aperture out. He sideboards out his Earthquakes and almost all his creatures. They are much less important than just controlling the game in this match. Carlos has some useful things as well. He has Douse, Stronghold Machinist, and a fourth Annul. He wisely boards out his Treacheries, which no longer have many targets, and a couple of creatures.

The second game again starts slowly but this time John's mana artifacts are not countered, although an Aperture is Annulled. A Rishadan Port on John's side stunts Carlos' mana enough that when John casts a Boil at the end of Carlos' fifth turn, he is forced to tap out to counter it. John then casts a Tectonic Break, destroying four lands from each side of the board. John maintains control with a pair of Rishadan Ports, and as Carlos can only draw one more land, he is forced to discard three times. John eventually puts him out of his misery with a Mishra's Helix.

Carlos has a great draw in game three, and is able to Annul John's two Thran Dynamo's and finally a Grim Monolith. This means that John can't threaten him as quickly with cards like Wildfire and Boil. Ideally John would like to be able to cast two threats in one turn. Carlos continues to show his blue deck skills by drawing sufficient counterspells to deal with a Mishra's Helix, a Boil, and a Wildfire.

Carlos is rapidly building up cards in hand with a four point Stroke, so although he has a few lands untapped, John makes a move with a Wildfire. Carlos doesn't have a Counterspell this time, but it's not so bad because he still has four lands in play. In fact Carlos hand is very good apart from his lack of counterspells, as he demonstrates by playing a Douse and following up with a Masticore.

Again he has a Counterspell for John's Aperture, and John is down to four life when he draws a Grim Monolith. He also has Covetous Dragon and Wildfire in hand at this point, and six lands and a Voltaic Key in play. Two of his lands are Rishadan ports, and Carlos has four lands, one of which is tapped.

John goes into a long think and comes up with a good plan. He can play the monolith, tap it for five mana with the help of the Voltaic Key, and then use his two Rishadan Ports. With Carlos unable to Douse he can then cast the Covetous Dragon. Carlos has four lands, so he can both regenerate his Masticore and deal the fifth point of damage to the dragon, but this will tap him out, and then John's Wildfire will kill the Masticore, and destroy all of Carlos' lands.

That's the plan anyway, but when John casts the Dragon, Carlos shows him another Thwart, and the Masticore comes over for the last four points of damage.