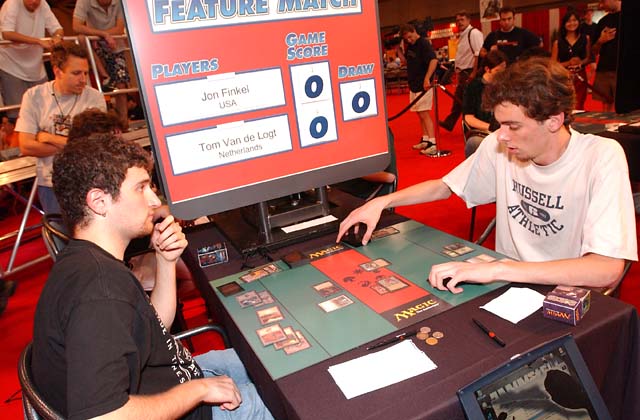 Jon "Johnny Magic" Finkel's draft was the talk of the press room once reports of it came back. The Machine himself had somehow managed to draft Four-Color Non-Green. When asked about his rumored shaky mana base, Finkel replied "People say that only because they don't understand the format. This block is all about shaky mana bases." To his credit, he has at least a Lair and Terminal Moraine to even things out.

Finkel had three colors on the board early, with plains, swamp and mountain helping him Vindicate away an early Goblin Legionnaire from Van de Logt. Van de Logt came back with Amphibious Kavu. Finkel matched him with Mire Kavu.

Van de Logt untapped and brought down Maniacal Rage, sending his Kavu. Finkel hesitated only a fraction of a second before moving in for the block. His read was off, however. Van de Logt showed Aggressive Urge, earning an uncharacteristic look of concern from The Mighty Finkel.

He untapped and dropped Zombie Boa. Van de Logt's Kavu came in again, and was joined by a Stone Kavu. Finkel set himself up for the race by Terminating the Stone Kavu and dropping Coalition Honor Guard. The two traded hits, and Finkel added a Sea Snidd to his team.

Now it was Van de Logt's turn to chump block. He sacrificed his Spider to the Boa to stay at four. Finkel slowed him down further with Hobble on his Amphibious beatdown machine. Van de Logt ran down his Honor Guard with the Stone Kavu.

The race hit a fever pitch as Finkel's Boa dropped Van de Logt to one. He had a Kavu Glider in reserve, which fell to save his bacon. Van de Logt made a Kavu Scout. Finkel's draw yielded no creature, and he had to concede the race to Van de Logt, hanging back with his Boa. Van de Logt had no trouble drawing men, however, and the game was soon his. 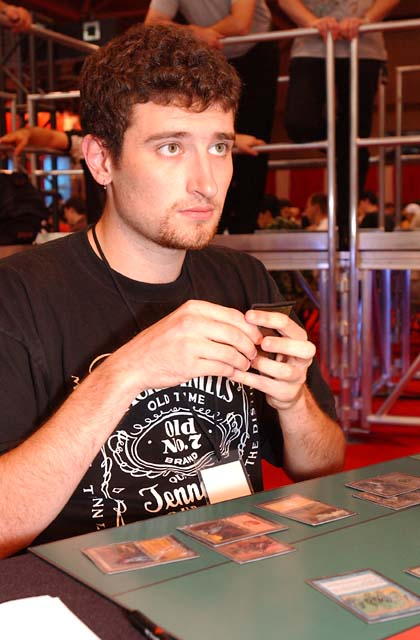 Finkel gave Van de Logt the lead-off position for game 2, and he made good use of it. Quirion Explorer powered out a Goblin Ringleader, which unfortunately sent four spells to the bottom of Van de Logt's deck. Finkel mustered a Tower Drake, but could only watch as Van de Logt made a Stone Kavu.

Finkel's slow accumulation of troops continued with Living Airship. Van de Logt showed him how it was done. Maniacal Rage came down on the Ringleader, and all Finkel could manage was a very slow "...Yes." as he assessed just what flavor of disaster this was. Alpha Kavu confounded his calculations. He dropped to nine.

He Hobbled the Stone Kavu and passed it back. His fliers teamed up on the Alpha Kavu, losing the Drake. He fell to five. Van de Logt played a Legionnaire. Finkel made a Mire Kavu, struggling to keep the incoming horde from overwhelming him.

Van de Logt sent his whole team. The Airship took down the Explorer, and the Mire Kavu tried to tackle the Ringleader. The Legionnaire made the save, and Finkel stood at three. His fingernails held firm with Zombie Boa. Van de Logt drew and thought hard, all but revealing his hand. He eventually decided to send his pumped-up Ringleader into the breach. It took down the Boa in a team block. He played out Amphibious Kavu.

Now it was Finkel's turn to take the reins. He dropped Honor Guard and Kavu Glider, sending with his Airship. Van de Logt had no rejoinder, and suddenly Finkel was running away with it. He played a Legionnaire and flew in for four.

Van de Logt drew a land and hurried it into play, tapping out to stop the party with Penumbra Wurm. The normally unflappable Finkel sagged forward in his chair. He drew his card for the turn and started processing. Afraid of funny business from his opponent, Finkel hesitated before dropping the bomb: A doubly-kicked Stormscape Battlemage.

The resulting combat was quick and ugly. The Battlemage, Airship and Honor Guard conspired to take down the Wurm's shadow, leaving only the Airship behind. Van de Logt was out of gas. Finkel had been taking the pain but card-advantaging him at every turn. He kicked up a Duskwalker, earning the concession.

The first play of the game was Finkel's turn 3 Pyre Zombie, which drew a nervous laugh from Van de Logt. He held it off with Amphibious Kavu, and Finkel took to the air with Living Airship. Van de Logt brought out a Scout and held back.

Finkel turned up the heat with Lava Zombie, suddenly playing the role of the beatdown deck. Van de Logt turned it around, Cloaking up his Amphibious Kavu and swinging. Finkel took it like a man. His Zombie charged in return, and traded with the Scout. He Terminated the Cloaked troublemaker and replayed his Pyre Zombie. 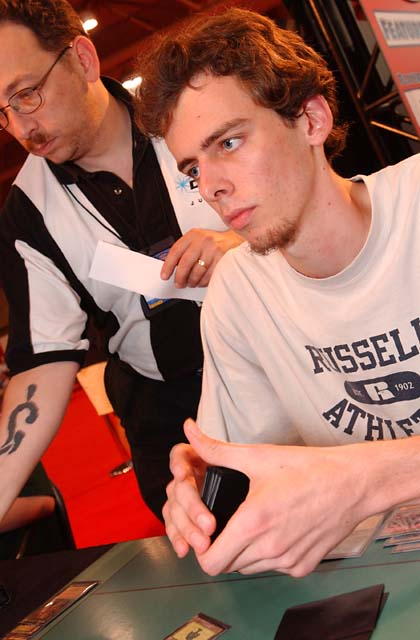 Van de Logt, quiet and intense, kicked up a Pincer Spider. Finkel dared him to play his card advantage game, swinging with his Pyre Zombie. Van de Logt didn't bite. Finkel added a Ceta Disciple. Van de Logt showed that he could play on his own terms, a Brass Herald getting him a Kavu Climber.

Finkel blew up his Herald with the Zombie, then tried to take down the Spider with a Disciple-fuelled Airship. Explosive Growth tipped the scales, and Finkel replayed his Zombie. The Spider came through for damage and the Climber came down.

Finkel stayed in the driver's seat with Coastal Drake, his Zombie running on virtual Fear. The Disciple took down the Climber single-handedly. Van de Logt continued to play his decks only strategy, the churning out of dudes. He made a Viashino Grappler and a Stone Kavu.

The Grappler fell to the Zombie, and Finkel held off the Stone Kavu with his Drake. For two turns the board stagnated, but then Finkel found a second plains at the top of his library, and his face lit up. As his smile turned into a giant grin, he tapped his seven mana. His hand arced high over his head, slamming the card onto the table: Desolation Angel.

The gallery broke into laughter, as did Van de Logt, who packed up his cards.

Van de Logt was unsurprised to lose the matchup, as he was disappointed with his draft. The true test of Finkel's unorthodox deck will be in the coming rounds.