Round 10: Justin West vs. Sam Kissajukian 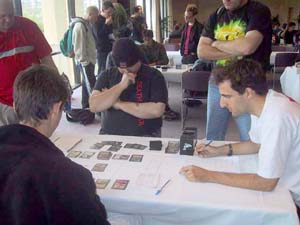 Sam is a Sydney based player who, in his six month playing career, has recently strung together about half a dozen consistently high results in assorted PTQs and similar. He had to grind in to Nationals, passing through in one of the Sealed Deck qualifiers. Justin West is a Victorian who has frequently attended Nationals and one Pro Tour. How will the old guard fare versus the new guard? They each knew each others decks (Sam with RGb "Wurmbies" and Justin with BW Braids) but the only comment about the match up I could elicit was from Justin "I'll win because I'm from Victoria and he is not."

Justin chose to play first and his second turn Mesmeric Fiend reveals the two madness spells as well as a Wild Mongrel and a Zombie Infestation to use them. He hides the Zombie Infestation and so Sam plays his Wild Mongrel that quickly gets a Vindicate from Justin. Sam then proceeds to rip a second Zombie Infestation, which he plays, dwarfing Justin's subsequent Phyrexian Rager. The Infestation put a halt to Justin's attacks after his Rager is defeated soundly by a madly cast Arrogant Wurm. However Justin manages to Chainer's Edict twice, killing both the token and the Arrogant Wurm. Sam has Flametongue Kavu for the Mesmeric Fiend, getting back his other Infestation and Justin drops a second Phyrexian Rager, which is madly Fiery Tempered out of the way, clearing the path for Sam's Flametongue Kavu. However Justin is now gets his seventh land, activating the two Chainer's Edicts in his graveyard which are used over the next three turns to kill a zombie token and an elephant token. The Flametongue is removed thanks to a Vindicate. However, it is all a rear guard action as Justin runs out of removal whereas Sam keeps dropping Roar of the Wurm's to make zombies and wurms. Soon Justin brings himself down to one with a Phyrexian Rager and scoops as the card provides no answers to Sam's 6/6 Wurm, 2/2 Zombie and 3/3 Elephant.

Sam shows me that he is sideboarding in Engulfing Flames and Compost, the Flame presumably for the Spectral Lynx that he never saw.

Justin plays first and the first creature is his second turn Spectral Lynx. Sam has a good two-drop of his own – Wild Mongrel, but Justin has Chainer's Edict and starts 'attacking for two'. On turn four, he casts his second Spectral Lynx (with Sam having no plays) but one of the twins is Terminated. Sam's second mongrel is Vindicated, keeping the path clear for Justin's remaining Spectral Lynx. He then Mesmeric Fiend's, revealing a hand full of ineffectual burn but hidden amongst them another Terminate. He takes the Terminate but Sam does not have the mana to both burn the Mesmeric Fiend and start casting guys to commence the life total race. He chooses to Call of the Herd over Fiery Temper, which joins his turn five Flametongue Kavu that had tapped the Spectral Lynx to no good effect. Justin's third Spectral Lynx dwarfs Sam's elephant, and things are starting to look very bad for Sam. He finally gets back his hidden Terminate and uses it on an attacking Lynxes but there is still one in play and he still only has his elephant and Kavu. Justin then casts his FOURTH Spectral Lynx in only 14 cards followed the next turn, and it's angry over the loss of two of its brothers. The next turn he casts Mesmeric Fiend, seeing some burn that won't quite stop his army, so he adds a Nantuko Shade and Sam scoops when Justin Reprisal's his Flametongue Kavu before alpha striking in his next turn.

Justin notes that he is glad he added his sixth Spectral Lynx, and claims that he'll add the remaining two in his sideboard. 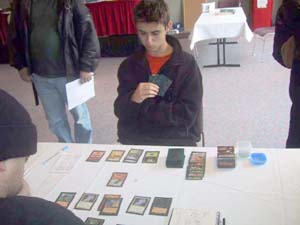 Sam elects to play and Justin chooses to mulligan once. As usual, the action starts on the second turn when Sam plays a Wild Mongrel and Justin plays Mesmeric Fiend, seeing that Sam has Terminate, 2 Roar of the Wurms, a Fiery Temper, a Violent Eruption but no more land. He takes the Fiery Temper, and accepts a hit from the Wild Mongrel and then Vindicates sam's Mossfire Valley leaving him with just a Forest. On his fourth turn, Sam draws a third land – but it is another Forest and so he has no plays. On his fourth turn, Justin casts Nantuko Shade but can play no more land either. Now Sam chooses to keep Wild Mongrel at home to keep Nantuko Shade at bay, who also remains at home on Justin's fifth turn. However, his Phyrexian Rager gives him a fourth land to play which starts to make his Nantuko Shade menacing. On his sixth turn, Sam draws yet another Forest and can only pass the turn. Justin now has enough black mana to start attacking with his Shade, which Sam refuses to block as it would have cost five cards to kill it. So Justin adds a Shambling Swarm to his patient army and waits. Sam finally draws a different coloured land – Mountain – and uses it to play a freshly discarded Roar of the Wurm from his graveyard. The Nantuko Shade shows no fear and trades with the Roar token and a Mesmeric Fiend arrives to fill its shoes. The Fiend reveals two Violent Eruptions, the last Roar of the Wurm, a Terminate and a Zombie Infestation. He takes the Terminate, and Sam then draws the land required to really start his engine – a Sulfurous Springs. This gets a heartfelt "Doh!" from Justin, but no Zombie Infestation arrives, Sam preferring to keep his mana available to decimate Justin's army of 1/1 and 2/2 guys. Justin uses Chainer's Edict to force Sam's hand; he plays Violent Eruption through his Wild Mongrel to kill two Mesmeric Fiends and a Phyrexian Rager, leaving a lone Shambling Swarm to dominate the board. On Sam's turn he plays Zombie Infestation but Justin has just the answer – Cloudchaser Eagle. However Sam makes the right play and adds an activation of the Infestation on top of the Eagle discarding Fiery Temper to kill the Swarm. So Justin is forced to kill his own Eagle and then the Infestation activation resolves, leaving the board creatureless except for a solitary zombie token for Sam. In his turn, Sam casts the Roar he discarded to the Infestation and the tables have turned totally. Justin has another Swarm on his turn and Sam attacks his Roar token into it, along with zombie, and then makes Wild Mongrel and Compost. Justin flashbacks a Chainer's Edict, and the zombie takes the hit for the Mongrel. He takes two from the Mongrel, leaving the life scores at nine apiece. He then casts a new Edict, cycling the Mongrel (due to Compost) then following up with a Spectral Lynx which gets Terminated in his end step. But it was just bait as Justin then plays a 10/10 Mortivore and the only answer Sam has is an Infestation. Time is called now and so Justin gets three attack phases to get his 'Vore through once. In Turn One, it is chumped by a zombie, and he adds a Swarm to his army. On Turn Three, Sam discards his last two cards to Violent Eruption the Shambling Swarm, causing the Mortivore to get –3/-3 until end of turn but +1/+1 permanently – so it still has lethal power. Thus he chumps the 'Vore again. However, by now the opportunity to draw a card from the Shambling Swarm (Compost) going to the graveyard has passed, leaving him without two cards to create a zombie with and so he dies on Turn Five to an 11/11 Mortivore. He does not realise his mistake until both he and Justin realise it together after the match.