Round 10: Kai Budde vs. Alan Comer 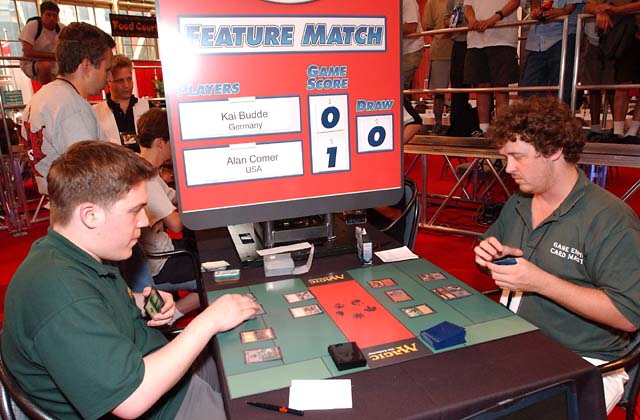 If Magic was Pay-Per-View, this would be the big heavyweight title fight rematch. Just a few months back, Budde and Comer met in the finals of Pro Tour-Barcelona. Even though Comer's deck contained maximum fatness in the form of Nemata, Grove Guardian, Molimo, Maro Sorcerer and Verdeloth, the Ancient, Budde fought his way through and picked up his second win of this Pro Tour season. If Comer wants revenge, Worlds is definitely the time and place. Plus, he gets to face Comer in Invasion Limited- the same format as Barcelona.

The first pack was very heavy in green, and somewhat unspectacular with Nomadic Elf, Harrow, Probe, Tidal Visionary, Sulam Djinn and Aggressive Urge. Surprisingly, Comer took Simoon even though the two players to his right had drafted green cards. Budde was in seat eight, and wheeled Aggressive Urge and Planar Portal. Comer continued on track with Maniacal Rage in the next pack, while Budde picked up Firescreamer and Slimy Kavu. Both players were drafting similar decks at this point, with a base of red-green.

The Planeshift pack was good to Comer, who got Terminate, Slingshot Goblin, two Mire Kavu, Quirion Dryad, Horned Kavu, Nightscape Familiar and Thornscape Familiar. Budde solidified himself as five colors, taking Rushing River. He also picked up Magma Burst, Stone Kavu, Rith's Grove, Quirion Explorer, Lashknife Barrier and Mirrorwood Treefolk. Apocalypse gave Comer Urborg Elf, two Bloodfire Infusion, Consume Strength, Phyrexian Rager, and Desolation Angel. The Angel is interesting, because Comer isn't playing much white mana. He picked the Angel up fifth when there was very little left for him, so it would be surprising for him to play it. Then again, this is the innovative and unpredictable Alan Comer we're talking about. Budde used Apocalypse to fill out his five color deck, getting a pair of Savage Gorillas, AEther Mutation, Urborg Uprising and Dead Ringers.

The difference in this match could be Comer's Tsabo's Assassin. Budde has practically no way to deal with it, aside from Magma Burst and AEther Mutation, which is only a temporary solution. This is ironic, because Tsabo's Assassin was in Comer's Top 8 deck in Barcelona as well. However, Comer still has to draw it, and if anyone can play around the Assassin in a bad situation, it's the German Juggernaut. 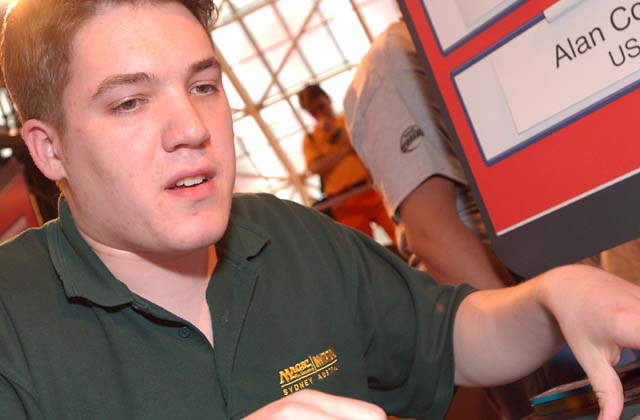 Comer went first, and Budde had to mulligan his opening hand. Viashino Grappler was played by Comer on turn three, and was joined by Slingshot Goblin, as Comer missed his fourth land drop. Budde whistled a little and called my attention to his hand, which contained nothing but land. Comer found a fourth land, and played Mire Kavu, while Budde summoned Mirrorwood Treefolk. All of Comer's creatures attacked, and the Treefolk blocked the Goblin, while Budde took five damage and went to seven life points. Comer followed up his attack with Magnigoth Treefolk, which was a scary, unblockable clock

Meanwhile, Kai started to stabilize with Savage Gorilla, but still needed a way to handle the big landwalker. He eventually drew and played Dega Disciple, which could potentially hold off the Treefolk. However, Comer cast Consume Strength, killing off the Disciple, and giving his Treefolk +2/+2. Kai simply noted, "That's unfortunate," and the game was over.

Budde decided to draw first this game. Comer summoned Nomadic Elf on turn two, and Budde played Helionaut on turn three. The Elf headed into the Red Zone twice, and was joined by Mire Kavu. Kai played Angelfire Crusader, but the Mire Kavu still got through for four damage. Comer continued to build up his army with Viashino Grappler. Kai attacked right back, and used AEther Mutation to bounce Mire Kavu, giving him four Saproling tokens. Comer then played Bloodfire Infusion on his Nomadic Elf, and used it immediately to clear the board.

Kai came right back with Savage Gorilla, but did not have a blue source on the table. Comer replayed Mire Kavu, which blocked Budde's Gorilla on the following turn. Kai was waiting with Explosive Growth, and his creature survived combat. He also summoned Stone Kavu, and Comer was now on the ropes. Alan did have his trump card, Tsabo's Assassin, but Budde had the Magma Burst. Comer played a few blockers, but Stone Kavu eventually came through for the last points of damage to force a third and final game. 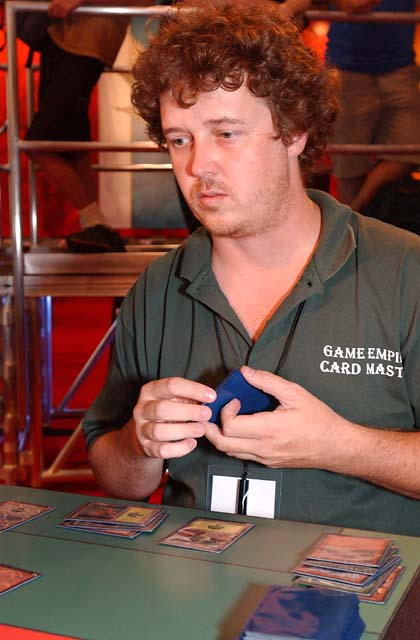 Comer wanted to draw first, and played a first turn Ana Disciple. He continued the curve with Nomadic Elf, while Budde summoned Quirion Explorer. Comer sent both his creatures into the Red Zone, and the Explorer blocked the Disciple. Budde used Explosive Growth to save his Explorer. He then untapped, and played Stone Kavu. Meanwhile, Comer cast Phyrexian Rager. Stone Kavu was sent into combat by Kai, and it dealt three damage. Budde complained, "I'd like to draw my Harrow every once in a while". Comer disagreed, noting "I think giving you colored mana is a bad idea." He used Simoon to take out the Explorer, which was key, since Budde only had out forests and one plains.

This would have color screwed Budde, but he summoned Helionaut on the following turn. On Budde's next turn, he thought for a bit, and attacked with Stone Kavu and Helionaut. The Grappler blocked and traded with the Kavu, and Budde played Dega Disciple. Comer then cast Tsabo's Assassin, which meant bad times for Kai. However, Kai attacked, and used AEther Mutation to buy himself a reprieve. Comer cast Harrow, and played Bloodfire Infusion on his Elf. He sacrificed it right away, wiping out every creature from the board. A Mire Kavu followed, and Budde answered with Savage Gorilla. Both traded with Comer attacked.

Tsabo's Assassin now showed up, and since Budde didn't play any creatures, it went into beatdown mode. It was joined by Urborg Elf on the following turn, and Budde was obviously drawing quite a few lands. With every turn that passed, the Assassin and Elf applied dorky beatdown. Kai finally drew a black mana, and played Urborg Uprising, getting back some creatures. Still, there was the issue of the Assassin, which Budde could not handle. He conceded, and Comer showed his hand filled with plenty of lands, joking "Look at what great games we had!"