Round 10: Kai Budde vs. Petr Nahodil 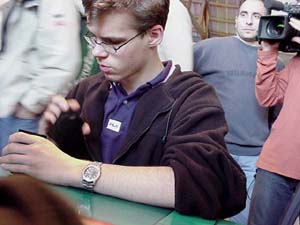 German player Kai Budde has opened up a three-point lead at the top of the rankings and seems on course for yet another Grand Prix title to tuck into a well-stocked trophy cabinet. His opponent, the Czech player Petr Nahodil, is no stranger to this situation as he's played on the Pro Tour and at the World Championships.

Budde has a solid blue-white deck with Irridescent Angel as a finisher. Nahodil has a red-green deck and is splashing for everyone's favourite non-dragon dragon – Mystic Enforcer.

Budde won the die roll and chose to go first. This proved important as he was able to Syncopate Nahodil's turn 2 Wild Mongrel.

Nahodil hit for a couple with Druid Lyrist before a Psionic Gift on a Pilgrim of Justice took care of it. Budde's Healer met an untimely end to Flame Burst and then Nahodil showed what the plains were in his deck for as Mystic Enforcer dropped into play.

Teroh's Faithful came in to take Budde back above 20 and then soaked up a couple of cards as Nahodil finished them off with Sonic Seizure after they'd blocked the Enforcer.

Budde brought in Lieutenant Kirtar and the Enforcer decided it wanted to stay at home for the moment. Budde started whittling away at the Czech's life total with the Gifted Pilgrim and Kirtar.

Nahodil needed to get rid of Kirtar. A Barbarian Lunatic tried and Budde saved it with Shelter. Nahodil tried again with Fiery Temper and this time the Pilgrim bit the bullet. This did give the Czech player threshold and with the Enforcer in the air it was Kirtar's turn to cool his heels at home.

A Barbarian Ring finally got rid of the annoying legend and after all that Budde had Second Thoughts to remove the Enforcer anyway. A Dreamwinder traded with a Nantuko Calmer and both players were left with nothing.

At this point Irridescent Angel would have been really good, but Budde had to make do with a second Dreamwinder and second Pilgrim. Nahodil tried to get rid of the Dreamwinder with a threshold Werebear but the German had yet more tricks as Embolden popped up to wreck Nahodil's hopes. He didn't draw anything else and died in two brisk attacks.

Nahodil chose to go first in the second game and brought out a turn 2 Wild Mongrel again. Again he also found a plains and his Enforcer, bringing it out on turn 4.

That single Plains suddenly turned into a liability as Budde brought out a Graceful Antelope.

Nahodil summoned a Petravark and had a tricky choice. He could take his own Plains out but at this point Budde had only drawn one island and this proved too inviting a target for it. He had an Enforcer and a Mongrel and was doing a lot of damage. 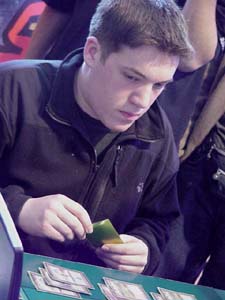 But when Budde summoned a Hallowed Healer the Czech player had to take drastic action. He cast Rites of Spring then pitched three land to the Mongrel in order to gain threshold. Budde chumped the Mongrel with the Pilgrim and sacrificed it to prevent the damage from the Petravark. This left Budde on five life.

The Antelope had be left back on defensive duties and this was where Nahodil made a bad read on the situation. Budde had five plains open and Nahodil held back on attacking with the Enforcer for fear of Second Thoughts. Second Thoughts on the Enforcer would of course be catastrophic but by holding back the Czech player could be giving Budde time to draw an answer and would ultimately lose a game he had won. Of course, if Budde had the Second Thoughts – which he didn't – then why wasn't he attacking with the Antelope?

Nahodil tried to get rid of the Healer with a Sonic Seizure only for Budde to save it with Embolden. With Budde only having two mana open Nahodil felt safe enough to charge in. Budde had to flashback the Embolden to stay alive but was able to get his island back by blocking the Petravark with Healer and Antelope. The German was left on a precarious one life.

He brought himself back to a safer five life with Teroh's Faithful and together with an Aquamoeba they took down the Mongrel as the Enforcer battered Budde back to one life.

The next turn Budde brought in a Mystic Visionary and he had to pitch his entire hand to the Aquamoeba in order to gain threshold so that the Visionary would fly and chump the rampaging Enforcer for a turn.

Now Nahodil was completely strangled. He couldn't attack because of Kirtar. He couldn't cast any more monsters because the Antelope had turned all his lands to Plains. He couldn't even lay a Mountain and hope to burn Budde out because of the Hallowed Healer. He'd dropped the German Juggernaut to one life and that was as far as he'd go. All that remained was a slow death but at least Budde was merciful as Mystic Zealot and Skywing Aven appeared to bring about a quick end.