Round 10: Kai Budde vs. Ryan Fuller 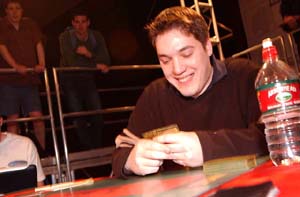 Perhaps the two most talented players in the game of Magic right now met in the finals of one of the best Rochester draft tables anyone can remember. Kai Budde, Jon Finkel, Ryan Fuller, Tom van de Logt, and Sven Geertsen went at it in the draft and by the third round of the day it was Fuller and Budde playing off in the table finals.

Budde kept a one land draw with Chatter of the Squirrel and Diligent Farmhand mostly because he knew Fuller was playing a very aggressive red-green. He didn't draw a second land until turn 4, but Fuller was unable to punish him. All Fuller could do was cycle a Refresh and play turn 4 Mad Dog. Budde did finally draw his second land and down came Wild Mongrel. The Farmhand got him his first blue mana and he was off to the races. Fuller played out a pair of Rabid Elephants, but he suspected Budde had Overrun in his hand so he had to leave them back on defense. Budde dropped two more creatures, discarded two cards so his Mongrel could beat up a blocking elephant, and then on his next turn all he had to do was show Fuller the Overrun and Fuller scooped up his cards. 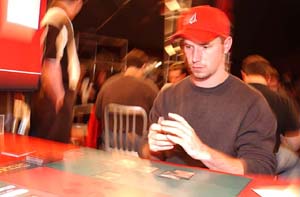 Budde had a much more expensive hand in game 2. His first creature was Nantuko Disciple on turn four. Fuller played out a bunch of guys, and he properly smelled out an Elephant Ambush, but he was only able to get Budde down to 13 before Fuller's offense was reduced to a lone Leaf Dancer. It's hard to attack into Nantuko Disciple, and Budde had two to go with his elephant token and Phantom Whelp. Fuller calculated that he had no chance to win if Budde had Overrun so he stopped even thinking about playing around it. Once again, all Budde had to do was flash the card at him from his hand and Fuller scooped up his cards.

2 Reckless Charge 1 Chatter of the Squirrel