Round 10: Kamiel Cornelissen vs. Dirk Baberowski 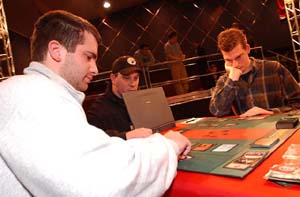 Both of these players have played in two Pro Tour finals, but Dirk has won both of his. As this PT drags on, both are making a run at the top again.

Both are 7-2; Dirk has gone 1-1 today, but Kamiel has been shut out so far with his triple-Wild Mongrel red/green deck that everyone that saw him draft was so impressed with. Magic is a funny game, I suppose.

Kamiel busted out a turn-1 Mossfire Egg, which he used to cast a turn-2 Werebear off of two Mountains. Dirk followed with the less impressive Escape Artist.

Kamiel had no other land, and used his Werebear to cast Krosan Avenger. Dirk brought forth an Ember Beast, making the Escape Artist suddenly look very good. Before the German could attack, however, Kamiel tapped his bear again to summon a Wild Mongrel. Dirk played a very dangerous Chainflinger and chose to wait rather than send his Beast to its demise.

Kamiel went on the offensive, Seton's Desiring the Avenger and attacking with it and the Mongrel. Dirk made a bad block, putting the Escape Artist and the Beast in front of the Avenger, when the Artist would have been better served chumping the Mongrel. Time would tell if the extra point of damage would matter.

Dirk's Chainflinger finally dispatched of the hard-working Werebear, wiping out Kamiel's only source of green mana, and cast a Barbarian Lunatic and the a Thought Eater. 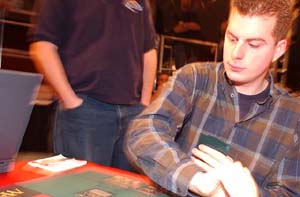 Kamiel finally drew a Forest, and brought out a second Werebear. Liberal discarding to his attacking Mongrel gave him threshold so that the Werebear could hold off most of Dirk's attackers...

But not all. The Thought Eater kept serving for two, and Chainflinger would chip in for a point of Kamiel's life here and there as well. Kamiel tried to amass an army, bringing out his other two Mongrels. But Dirk had a Chamber of Manipulation that prevented Kamiel from ever being able to attack again. Eventually the Eater and Dirk's handful of burn finished the Dutchman off.

"I think I would have played that game differently had I been in your seat," said Dirk to Kamiel. Planting seeds of doubt? Questioning his ability? Or simply making small-talk? In any event, Kamiel was obviously uncomfortable with the subject, and it was quickly dropped.

Kamiel had to mulligan to start the second game. "Two Mountains and no Egg?" asked the German. Kamiel kept six, and Dirk kept a two-Mountain two-Ember Beast hand.

Kamiel played a Ravaged Highland turn 1 and sacked it to bring out a Mongrel on turn 2. On turn three he played another red land, which prompted comments from Kai Budde from the next table. "Having some more land issues over there, Kamiel?"

Dirk drew the two lands he needed, and played Ember Beast and Pardic Firecat back-to-back and beat for five. A second Beast came down, and the Mongrel was reduced to guard dog. 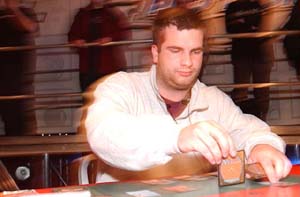 Kamiel finally drew green mana and Seton's Desired the Mongrel, making it quite a formidable blocker and a long-term threat. With the board stalemated, more creatures were summoned but no one dared to attack.

Dirk was holding Chamber of Manipulation, waiting for the right moment to spring it, when he drew Repel. "Here's a mise," he said before Repelling Kamiel's enchanted Mongrel. He then sent with the two Beasts, losing one to the other Mongrel but bringing Kamiel to 12.

Chamber came down, which prevented Kamiel from attacking again, and Dirk's Escape Artist kept pinging away. Eventually Dirk reached threshold and Demoralized for the kill.

After the match, Kamiel lamented going 0-3 with his deck. "I got a match loss once (for a marked card), and I never got a fast draw, and I had a lot of mulligans. I thought it was a pretty good deck."

2 Chatter of the Squirrel