Round 10: Kyle Rose vs. Darwin Kastle

Round 10 feature match between Darwin Kastle and Kyle Rose. This is the 3rd time they had met and before this the score was one victory to each. 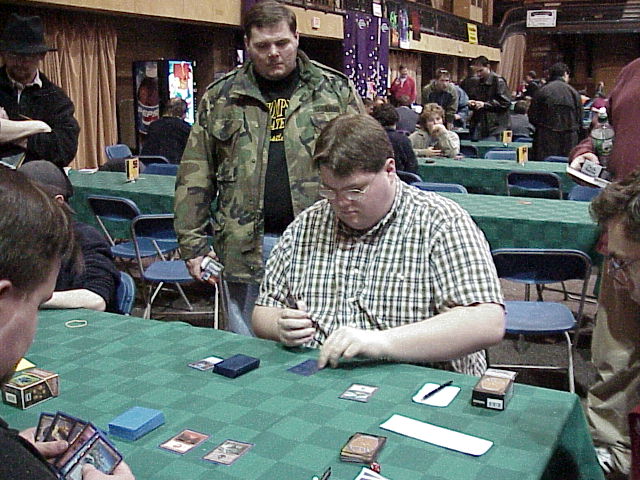 Darwin won the die roll and opted to play. His deck was red/black, splashing for 3 blue cards while Kyle was playing blue, white sporting a better mana curve than Darwin's deck which had a lot of three drops typical of his color combination.

The first game was about both players' inability to draw land. Though Kyle's was self induced, opting to keep a one land hand while going second. This was a very tempting hand for him to keep as it sported a Crimson Acolyte among other early drops. Both players had limited information about each others' decks and Kyle knew the Acolyte would find plenty of use in this matchup. Darwin made his third land drop and played successive creatures putting Kyle's draw under a lot of pressure. Making his second land drop a turn late, he eventually played the Acolyte then didn't play another land for some time, taking early hits.

Eventually a Samite Archer resolved to turn off some of Darwin's heat. Then Kyle dropped his 4th and 5th lands while Darwin looked to the top of his library asking for his 4th, but it didn't come until too late when Kyle had taken control of the game and made several flyers that quickly dispatched Darwin. 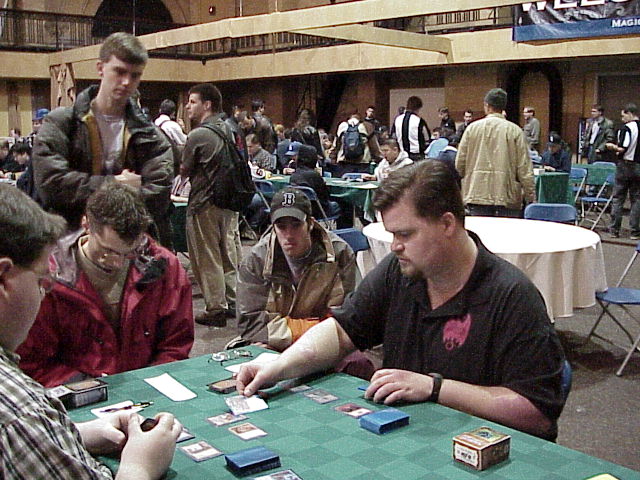 Kyle told me that he "hates to mulligan." I guess he had a lot of faith in the top of his library (and his scouting). This time, Darwin was determined not to be defeated by the Crimson Acolyte and so he boarded in his Shifting Sky, which he drew in the next game to nullify Kyle's Acolytes and negating the gating effect of his own creatures, by making all nonland permanents in play white. So this reduced the game to a straight race between an Angel of Mercy on Kyle's side and a Lava Zombie on Darwin's. A late Traveller's Cloak broke the Zombie through for the win.

Kyle's Samite Archer makes his third appearance this match but is quickly dropped off in the bin. Both players had reasonable mana draws and again made successive creatures. Kyle kicked his Benalish Lancer, making a formidable threat and started to beat down on Darwin who remained stuck at four mana. The Acolytes were dealt with quickly this time, but Darwin struggled to defend himself from the Lancer, with his guys pinned down by Stormscape Apprentice. As Darwin found himself one step away from the Dead Zone he top decked, and Demised the Lancer. Some reprieve was found in an Honorable Scout gaining 10 life, but this wasn't a race scenario as Kyle didn't drawn any more pressure. Darwin's draw showed more superior monsters with a slightly tighter mana draw that allowed Darwin to smash Kyle in the remaining dual.