Round 10: Lenny Collins vs Andrew Gordon

Despite a game loss for his noisy behaviour in the previous round, Collins managed to beat out his opponent Dan Turner and was sitting pretty on a 9-0 record. Being seated between his teammate and a player Gordon knew from Melbourne had done wonders for his deck. The cooperation had allowed all three players to come away from the draft with powerful cards, and decks. Gordon was also the only other player who remained undefeated on a 8-0-1 record. After winning the die roll Collins elected to play first. 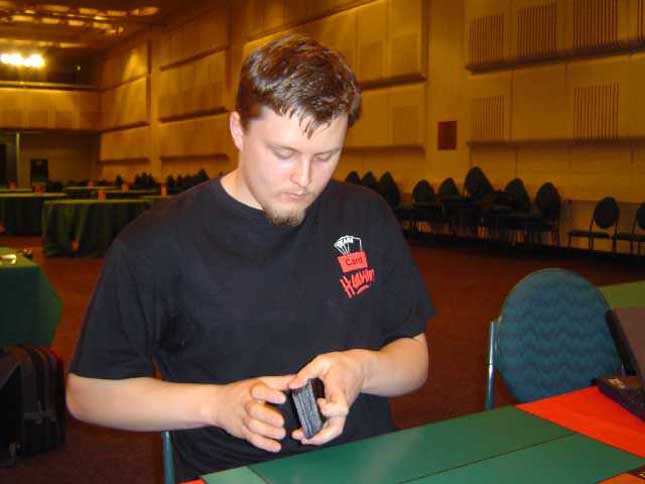 A second turn Tel-Jilad Chosen is the first play for Collins and it moves in for 2 points of damage. Gordon drops down a Tel-Jilad Chosen of his own and the two trade in the red zone. Collins has no turn four play and Gordon brings out a Clockwork Condor on his. Collins plays another land and passes the turn across, again with nothing to summon. The little Condor comes in to the red zone for 3 damage, putting Gordon ahead in the race 18-17. Gordon Shatters one of Collins artifact lands in an effort to keep him from making a play and drops down an Iron Myr. The plan proves effective as a land and a useless Leonin Scimitar enter play.

The Condor once again flies its way into the red zone and is joined by a Wurmskin Forger after the attack phase that elects to counter up three times. Collins, despite having 4 cards in hand, still has no major play and sends the turn, with Gordon red zoning the Forger and the Myr. Finally Collins gets up to 7 mana and drops down his Plated Slagwurm. and now its Gordons turn to do nothing as he leaves his team back on D.

Collins shifts the Scimitar onto the Slagwurm, summons a Goblin Striker and casts Bloodscent. Before blockers Gordon taps his Myr and floats a mana, shooting Collins with Shrapnel Blast when damage goes on the stack, dropping him down to 4 life. Facing down a 9/9 creature Gordon's board looks to be a nightmare, but he remains calm, draws a card, and fires a second blast of Shrapnel at Collins head, giving him the first game. 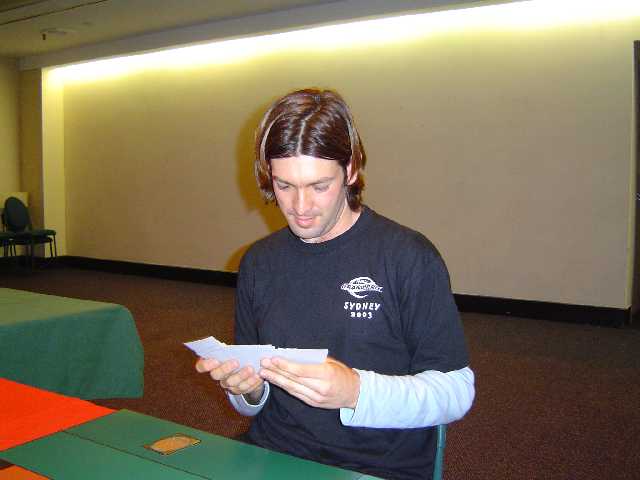 Gordon once again has an early Tel-Jilad Chosen and Collins turn two response is a Bonesplitter. The Chosen moves in for two damage and both players fail to play anything on their third turns. The attack minded Chosen is paired up with a Clockwork Condor on turn 4 and they take Collins down to 11 life during the next attack phase. Collins' artifact land gets Deconstructed by Gordon and he uses the mana to jam down an Ogre Leadfoot. A Myr Enforcer is Collins last hope but it is met by a Shatter topping off an almost perfect draw for Gordon and handing Collins his first loss of the tournament. 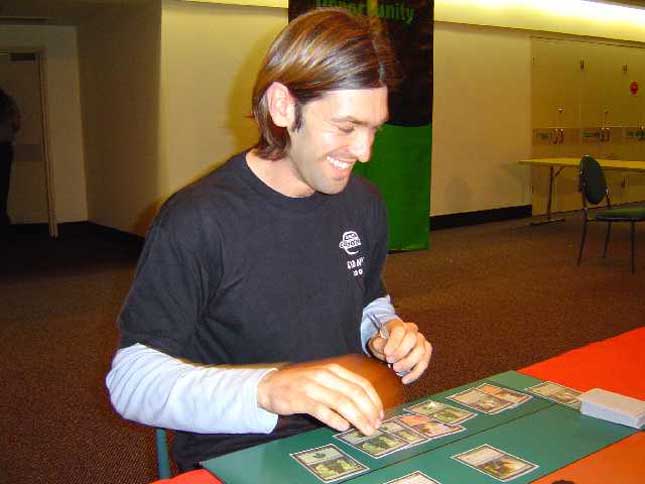