Round 10: Licence to Ill vs. DM Fanclub 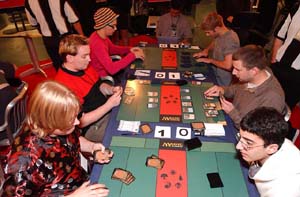 Licence to Ill vs. DM Fanclub

The color lines were drawn early in this cross-continental matchup. Europe's DM Fanclub followed traditional wisdom and put black-red, blue-white and base-green in A, B, and C respectively. Licence to Ill, of North America, were wilier. They switched the roles of A and C, hoping to overwhelm red-black with green fat, and to beat the green deck with an avalanche of dudes.

Invasion was good to Licence to Ill. Pete Leiher got set up with Exclude, Repulse and Faerie Squadron. Jay Elarar got a Pyre Zombie to rule the long game. Jamie Parke picked up plenty of animals. Across the table things were not so clear. Jens Thoren was in a good way with a tapper, Shackles and two Vodalian Serpents, but his teammates struggled. Tomi Walamies was literally all over the map, taking Shivan Emissary, Ordered Migration and Serpentine Kavu without picking up spectacular mana fixers. Johan Sadeghpour got the dregs. Some removal, not much more.

Planeshift had plenty of red-black to offer, as well as Shivan Wurms for both Parke and Walamies. The second Wurm was accompanied by Magma Burst and Terminate, but DM Fanclub let the Terminate get by in favor of a Rushing River for Thoren. Sadeghpour scored a second Terminate right after.

DM Fanclub got another gift pack in Apocalypse. After some truly mediocre packs, Sadeghpour cracked Phyrexian Gargantua, with Emblazoned Golem for Thoren and Goblin Trenches for Walamies. Thoren's pack gave him a second Golem. Leiher was forced to hate away Desolation Giant, but it looked like it might make his deck when he was also given a Rakavolver.

Laying out their decks, DM Fanclub were in a bit of a bind. Sadeghpour had great spells but was forced to run three Morgue Toads to get to twenty-three spells. Thoren had an average blue-white-black deck topped by Golems and Serpents. Walamies had all the power cards, but limited fixers.

Compare that to Leiher's air force backed by two Jaded Responses, Parke's twin Penumbra Kavus and solid removal, and Elarar's double-Lava Zombie, double-Phyrexian Rager. Things were not looking good for the Europeans. Elarar went a little rogue in his design, looking to further frustrate Walamies's mana woes. He compounded his Plague Spores with two Dwarven Landslide. They moved to the Feature Match area and began.

In the B Seat, Pete Leiher ran his Tidal Visionary into Jens Thoren's Standard Bearer, as the Flagbearer could really mess with his plans. He kept Thoren off his paces with Repulse, then gated in a Silver Drake, threatening Faerie Squadron on the next turn. Thoren came back with a 4/5 Emblazoned Golem.

Jay Elarar's mana was giving him grief against Tomi Walamies. Walamies made him pay with an early Goblin Trenches, and started making tokens. The first two fell to Fire, and then Elarar made a Thunderscape Familiar. Too bad Walamies had Sunscape Apprentice. Elarar fell to ten.

At the far end of the table, Jamie Park and Johan Sadeghpour and Jamie Parke traded hits with mediocre dudes. When Parke hit five mana, he tried to run away with the game by playing Shivan Wurm. Sadeghpour, however, held one of his two Terminates, and the race turned in his favor. 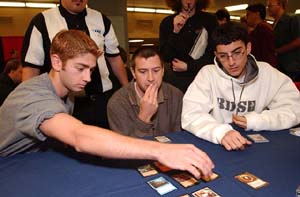 Leiher did play out his kicked Faerie Squadron, and then a 4/4 Spirit Linked Rakavolver. The threat of life gain made sure that the Golem couldn't race him. Two more attacks for six ended the game in Leiher's favor.

Walamies's goblin-soldiers were relentless in their attacks. Elarar had Slay for a Horned Kavu that entered play, but his fourth land came far too late. He could play creatures or removal, but Walamies could just make two more dudes and swarm him. He shuffled up his cards for game two.

Sadeghpour poured on the pressure, but his creatures weren't making a brutal enough clock. Magma Burst punched through a big seven, to leave Parke at five, and Death brought back a fallen Caldera Kavu, but Parke was able to bring down two more creatures. Sadeghpour's land-light situation and low life total meant he couldn't afford to trade and lose to the next spell Parke played. Two turns later, with Sadeghpour's board undeveloped, Parke removed a blocker and sealed the deal with Wax.

Thoren was in a bad way in his second game. He came out quick with Helionaut for Leiher's Coastal Drake, but fell behind on mana. Leiher made a Lashknife Barrier and a Silver Drake, and Thoren had to tap out for Shackles to stop the bleeding. Leiher was ready with Dismantling Blow. He put Wings of Hope on his Stormscape Familiar and went to town.

Elarar's draw stalled in the second game as well, despite Thunderscape Familiar powering out Phyrexian Rager. He missed his fourth land drop and played a Pyre Zombie. He even lacked the double-red to fling it. Walamies took advantage with a Horned Kavu and Crimson Acolyte.

Parke was facing Mire Kavu, Morgue Toad and Bloodfire Dwarf with just a very fragile Thornscape Familiar on his side of the board. He held Wax/Wane, though, and so went for his Shivan Wurm. Sadeghpour didn't even bother blowing up his Dwarf, he just Terminated the Wurm at end of turn. Parke made as many monsters as he could, but was bowled over by Sadeghpour's Dead Ringers. It hardly mattered that Sadeghpour's Grave Defiler moved him past four lands that waited at the top of his deck. They moved to game three.

Next door, Leiher's was completing the job he began. Thoren's four land was not enough to stand in the way of five in the air. Licence to Ill took the first match. The imbalance was corrected in short order as Walamies shelled Elarar with Serpentine Kavu and Shivan Wurm. Elarar held no banish, and so it all turned on Sadeghpour-Parke. 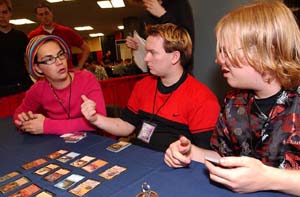 Parke opened up three lands and some spells for game three, so he was in business. He led with Amphibious Kavu. Sadeghpour matched with Morgue Toad. It wasn't so impressive when Parke upgraded to Sparkcaster. Sadeghpour made a Volcano Imp and passed it back.

Parke attacked again, fetching black mana with Lay of the Land and bringing another Gray Ogre to the table. Sadeghpour made no play on his turn. He blocked the incoming Sparkcaster with the Imp and gave it first strike, threatening burn. This was enough to convince Parke to target it with Scorching Lava.

With Parke's board significantly less terrifying, Sadeghpour was free to develop his own. He scored Grave Defiler off Brass Herald, and had Dead Ringers for Kavu Climber and Amphibious Kavu, drawing a delighted "Ooh!" from the gallery of Europeans.

Parke wasn't out. He made Thunderscape Apprentice and Kavu Scout. The Apprentice's black ability was looking fabulous next to Sadeghpour's eight life. Meanwhile Sadeghpour's Defiler put his second Terminate at the bottom of his library, making Shivan Wurm a virtual "Game Over" if Parke could draw it.

He drew land. Sadeghpour's forces continued to mount. Parke had to lose his Apprentice in combat. In frustration Parke slammed his deck with his fist, and it answered with Penumbra Kavu for the first time all match. Sadeghpour hit for three with his regenerator, and Parke punched his deck again. This time it gave him Ancient Kavu.

However, he needed an answer to the big Grave Defiler. Sadeghpour was playing a patient game, unwilling to lose to a trick in Parke's hand. Parke forgot to pound his deck, and was rewarded with mountain. He continued to treat his deck right and only got scorned by it. Two forests later he was buried under Sadeghpour's dorks.