Round 10: Life Rough at the Top

Pro Tour Philadelphia Jeff Novekoff took a deck he got from a friend and battled into the Top 8 before Gadiel Szleifer took him down. For this event he said he practiced more and brought a deck of his own creation, Red Rock. The deck takes a traditional black-green Rock deck and adds red for . 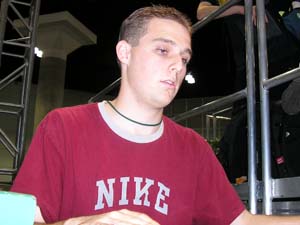 Novekoff came into the round at the top of the charts.

Tsuyoshi Fujita brought a Boros Deck Wins. That is, take a traditional Red Deck Wins deck and add Kataki, War's Wage, Isamaru, Hound of Konda and while leaving in the burn and land destruction present in Red Deck Wins. Tsuyoshi was no stranger to red. He took a Red Deck Wins deck to a 9th-place finish at the other Extended Pro Tour this year in Columbus.

Jeff came into the match at an undefeated 8-0-1 while Tsuyoshi was 8-1.

Jeff started the action with a turn-one Birds of Paradise. Tsuyoshi had a Lava Dart and wasted no time in sending the Birds to the graveyard. Jeff spent turn two with a Cabal Therapy, named Slith Firewalker, and missed.

Tsuyoshi played down a . He still had Pillage, Firebolt, Grim Lavamancer, Lava Dart and land in hand.

Jeff used Eternal Witness to return the Cabal Therapy. Tsuyoshi Pillaged Jeff's only Swamp, flashed back the Lava Dart to kill the Witness, and then swung for 2.

Jeff played a Living Wish to fetch and the Cabal Therapy to hit a previously revealed Grim Lavamancer. Tsuyoshi continued the beats with a Kataki, War's Wage.

Jeff played a second Living Wish, this time to fetch and cast a Dwarven Blastminer. Tsuyoshi Lava Darted the Miner, swung for 4 and played a Firebolt to knock Jeff to 7. Jeff cast a to take down Kataki, War's Wage. Tsuyoshi found his fifth land in time to flashback a Firebolt. The hit again.

Jeff ripped a second Flametongue off the top to hit the Legionnaire as Tsuyoshi was tapped out from the Firebolt. Jeff was in control but still dangerously low on life.

All of a sudden Jeff scooped. Tsuyoshi seemed surprised.

"You had a Firebolt in your graveyard, right?" Jeff said.

"No", replied Tsuyoshi. But then he revealed that his top card -- Molten Rain, which would have killed Jeff next turn in any case. 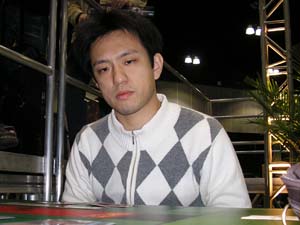 A quiet calm surrounded Fujita as he steamrolled into Round 11.

Jeff mulliganned his opening hand quickly. There are some hands you just can't even think about keeping. His second hand was no better and Jeff went down to five cards. The crowd seemed to know that this game was over already and began to wander to other feature matches. Jeff's next hand of five had no land. Down to four.

Four cards. No land. Now this game had unlimited upside for Jeff. A win here would be truly amazing.

Jeff started with a Contested Cliff. Tsuyoshi played an Isamaru, Hound of Konda. Jeff drew a Llanowar Waste to be able to cast a Living Wish for Ravenous Baloth. Tsuyoshi had a strong start, as he played two s following Isamaru.

Jeff had no third land. Even though he was holding two s, they could not be in time to save Jeff from his own bad land draws.