No-one would mistake New York in December for Honolulu, but here in Round 10 the two Hawaii finalists were paired up in a rematch. Herberholz joked that he clearly wouldn't be winning this event, since he still had money in his bank account. There was no desperation to fuel him. Jones offered his usual self-deprecating charm. 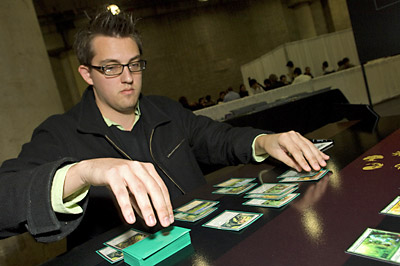 PT–Honolulu champ Mark Herberholz plays best when he really needs to win. Herberholz mulliganed, then opened with Goldmeadow Harrier and Kithkin Greatheart. A Treefolk Harbinger got in the way and set up a third land for Jones, who passed it back with three open. Herberholz made a Leaf Gilder and didn't bother chancing Jones having an Ambush.

Jones played his fourth land and Cloudcrown Oak, locked down by the Harrier. Herberholz played a Nath's Elite, and clashed. Jones had Liliana "Bulletproof" Vess to win the clash, but the Kinsbaile Balloonist waiting on the top of Herberholz's deck would be trouble.

He spent a turn clearing out Herberholz's hand with an evoked Mournwhelk and lost his Harbinger to the incoming Elite. Heezy made his Balloonist and passed it back. Here, Jones will freely admit, his brain turned off, possibly from the bleak outlook of the match. Without an answer to the Balloonist or Harrier he was facing 6 in the air for two consecutive turns, enough for the loss. Rather than playing Liliana Vess and tutoring up an answer, he played out Woodland Changeling and Wanderer's Twig and hoped for the best.

The best did not happen. He got to play his Vigor, who watched helplessly as Herberholz's men flew in for the win.

Mark Herberholz: "Well, that 0/3 held me off a little while."

Things went better for Jones in Game 2. He started out with Woodland Changeling and Boggart Loggers, while Herberholz had only a Kithkin Greatheart and no play on turn three. Jones beat in and added a second Loggers, the two forestwalkers making a formidable clock.

Herberholz put out a Kinsbaile Balloonist and pushed it in front of the changeling, but got on the wrong end of a Fistful of Force. Jones's Wanderer's Twig was enough to win the clash and add 4 points of trample. Without an answer to the Boggarts, Herberholz's Cloudgoat Ranger was not enough.

Craig Jones: "Well. That was probably the best draw I could've had."

Herberholz boarded in Hornet Harasser and Final Revels along with some mana-fixing to counteract the Loggers. 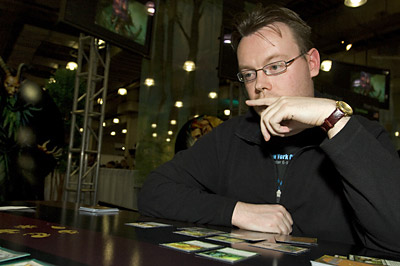 PT–Honolulu finalist and Pro Player Blogger Craig ‘The Professor’ Jones Jones started with Treefolk Harbinger for Battlewand Oak, telegraphing a beatdown draw, then fetched a land with Wanderer's Twig. Herberholz's draw was uncooperative. He passed his second and third turns without a play. His fourth turn yielded a Hillcomber Giant.

Jones dropped a forest and another Treefolk Harbinger, this time for Seedguide Ash, and the 5/7 Battlewand Oak busted in. He supplemented this with the dreaded Loggers. Herberholz hit back and played Nath's Elite, losing the clash. The Ash came down on Jones's side, and the Oak and Loggers hit for another 5.

Needing to turn the corner, Heezy came up short. His Elite traded with the Ash, but he had no follow-up, just Gilt-Leaf Palace and Wanderer's Twig. Meanwhile Jones was putting together Oakgnarl Warrior and swinging for another 5, leaving Herberholz at 5. He had no play, and passed it back, waiting on his Hillcomber.

When Jones swung in, Herberholz showed the Gilt-Leaf Ambush. It all depended on the clash, and Jagged Scar-Archers was enough to take it. The two Treefolk fell. Herberholz clung on at 2 life. Final Revels cleared away the Loggers, and he sent it back. Jones was not yet out of gas, however, and showed Makeshift Mannequin to get back his Loggers and deal the final 2.