Round 10: Mark Zajdner vs. Jason Simard 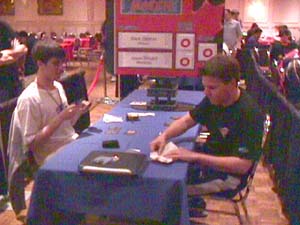 You're not going to see any Mark Zajdner Fan Clubs. He's frenetic, arrogant, and has trouble controlling the volume of his voice. However, he also has no small ability playing the magical cards. His opponent is Jason Simard of Manitoba, who found the spotlight at last year's Nationals, finishing sixth. The only intersection of their personalities is an excitement at being so close to a Top 8.

Zajdner's bravado almost got the better of him during the draft. Lagging behind the rest of the players at his pod, when the call to pass the booster was made, he had not chosen a card. As a result, he was forced to take a random card. Upset at the turn of events, he lost his cool and almost did something he'd regret. Luckily, he found himself before earning an ejection. His only comment on the issue was "Could you be sure to say something negative about [penalty-issuing Judge] Duncan [McGregor]?" 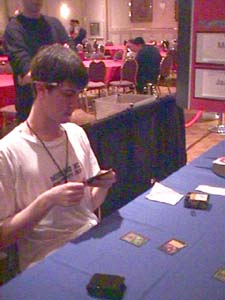 Zajdner led with Cabal Trainee that was soon put on ice by Dreamwinder. However, Simard had no follow up. That led Zajdner to wonder aloud if Simard was waiting on Syncopate. He threw caution to the wind and slammed down Genesis. Simard had nothing.

He drew into Hydromorph Guardian. Zajdner pressed with Cabal Torturer, Genesis savaging Simard's life total. Simard tried Wormfang Drake, but could only come in for two because of the Torturer. Zajdner was hitting back harder, and adding Brawn to his team. It wasn't looking good. Simard brought out Patchwork Gnomes for no other reason but to feed them to the Torturer.

Benevolent Bodyguard showed up for Zajdner and he swung all out. Keep Watch drew Simard a bunch of cards. None of them would stop the face-smashing. Sickening Dreams for three ended it then and there.

"I'm not even gonna look in my sideboard. I'm playing every single playable card I've got." - Mark Zajdner

While Simard went to his board, Zajdner chatted about Simard's native Manitoba, confusing it with Saskatchewan. This ignorance prompted an anecdote from Simard. 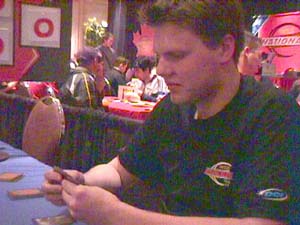 "One time we were down in Minneapolis for a GP. In the McDonald's I ask the woman if they take Canadian money. She said 'What's that?'" - Jason Simard

Zajdner's opening for Game 2 was downright sick. He curved out with Bodyguard, Patrol Hound and Gravegouger. Simard found a Hydromorph Guardian to try to trade for the Gouger, but Zajdner had Toxic Stench at the ready. Then he added Mystic Visionary.

When Simard refused to act on the following turn, Zajdner went with Mesmeric Fiend. Simard's lack of forests coincided nicely with his mittful of green spells. The only blue one, Turbulent Dreams, was tucked under the Fiend and then protected with Floating Shield. Simard drew his next card, and scooped.