Round 10: Masahiko Morita vs. Katsuhiro Mori 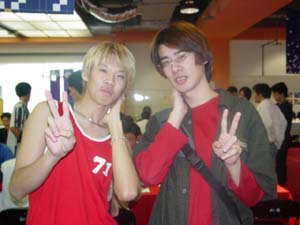 These two players are demonstrative of the massive talents at work in the Japanese Magic community. Katsuhiro "Instantaneous" Mori is not only the fastest player in the business, but also one of the best, having broken out of the three-way Rookie of the Year race with a tenth place finish at Worlds last year to take the title. Today's he's running blue-black Psychatog, and is still coming out of each round after twenty minutes. Even more baffling is this: A deck registration error on his part meant that in place of his four Force Spikes are basic lands. Not only did he make Day 2 with a thirty land deck, he won his first two rounds today!

His opponent is the more reserved Masahiko Morita, who struggled just short of greatness until he, Mori and Masashiro Kuroda took home the gold at Grand Prix - Nagoya earlier this year. He'd spent the season in second place, dropping to Kohei Yamadaya at Grand Prix - Shizuoka and then Alex Shvartsman at Grand Prix - Fukuoka. But when you don't have a title to your name, second hardly satisfies. He's looking to add to his resume this weekend.

Since the two are teammates, and because they wanted to hurry off to lunch, they decided to play one game for the match.

Morita started strong with Llanowar Elf and Wild Mongrel, while Mori contented himself to a Nightscape Familiar. Morita pitched a Roar on his next attack and tried to flash it back, but Mori was ready with a Counterspell.

However, he had no counter at the ready for Morita's next play of Quiet Speculation. Three Roars went to the graveyard, and it looked like the end for Mori. He rallied as best he could. Repulse took down one of them. Morita made a replacement and a second Mongrel. Mori had had enough of this farce, and scooped it up.