Round 10: Matt Rubin vs. Bob Maher 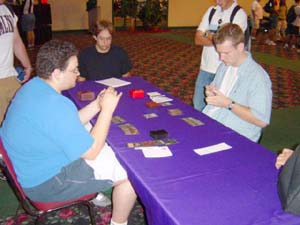 Matt Rubin is one of the rising players on the Pro Tour. Just a couple months ago he hit his first top 8 at US nationals. He was still undefeated in the GP at 6-0-3 with his mono black control deck. His deck was fairly standard. Bob was playing the same deck he played the week before at GP London. His own version of Zombie/Upheaval that sent at least two people to Day 2.

Normally this would be a good matchup for Bob. Mono black has no real answer to Upheaval. Matt came out pretty quickly early with a pair of Nantuko Shades though and Bob quickly found himself on the ropes with no black mana to remove them the first three turns. Bob found a Darkwater Catacombs turn four and took a mana burn to Innocent Blood away one of the Shades. Matt still was able to knock him to 1 with the remaining Shade. Bob found himself with an Innocent Blood and only the filter land but he tapped out for Deep Analysis and found the Swamp he needed to Blood the Shade pain free. Matt made a play on the next turn he later said he should not have made. He played Rancid Earth on Bob's filter land when all he would need was Threshold to turn it into a win condition. Bob played a Standstill the next turn which stood for a long time. Rubin waited ten turns before finally breaking the Standstill with a Tainted Pact.

Rubin had 20 mana in play thanks to many swamps and a pair of Cabal Coffers. Bob was definitely in the danger zone this turn. Rubin played Tutor and then Mirari which Bob let resolve. A choice the Upheaval deck almost never makes. Next he attempted to play a Sludge and copy it, but Bob had a pair of Logics to answer the two Mind Twists. Bob untapped and played Upheaval. He still had no Zombie Infestation. He got out a turn two Compulsion, and now seemed to be on track to winning the game. He started setting up for a war with Rubin. First he played Cunning Wish for an Envelop and the next turn Wished again for Flash of Insight.

Matt came in with the must-counter threats turn after turn. First a Mirari, then a Mind Sludge the next turn followed by a Rancid Earth. Bob had to flashed back the Flash for 15 cards, found an Envelop and put the much needed Zombie Infestation as close to the top as he could. He had five cards between him and the victory condition now. Bob still appeared to be ok. He had a Logic in hand and his last Envelop was one of the four cards he hadn't seen yet by the time Matt took his turn. Matt Tutored and played his last two Rancid Earths. Bob searched for the Envelop, but it was the last card in his deck before the Zombie Infestation.

"All I needed was a turn" Bob told me. 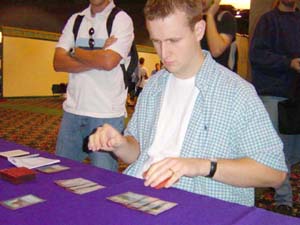 The next game Maher got his Infestation right away on turn 2. Rubin got his own Infestation, but Maher had more card drawing thanks to his Deep Analysis. Matt played a Braids, but Maher had the Logic. His tokens stalled Matt long enough for Bob to get to 8 mana. Bob unleashed the vicious Upheaval/Infestation combo turn 8. Rubin was unable to stop the Zombie Horde.

The clock had only 3 minutes left, but the shuffled up for game 3 anyway. Bob found a turn two Infestation again, but this time Rubin was able to resolve Braids. Bob had an Edict, but it was still a valuable 2 for 1 for Rubin with the Infestation in play. Rubin resolved Mirari the next turn and then proceeded to Rancid Earth away both of Bob's blue sources. Bobs only remaining option was to beat down with his zombies and the Faceless Butcher he played after the Mirari. Time was called, and it looked like Bob might be able to squeak out the win. Rubin copied a 2 point Skeletal Scrying and played his own Zombie Infestation. Time was called and Rubin was able to hold off Bob for the remaining turns to earn his 4th draw of the tournament.

1 Screams of the Damned