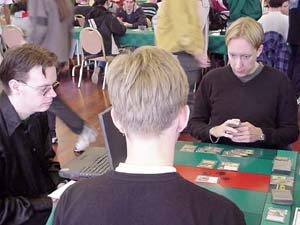 The Swedes had the advantage of sitting next to each other in the draft and were able to co-operate with Mattias Kettil drafting blue-white and Mattias Jorstedt taking green-black. "I only stabbed him five or six times for the fun of it" - Kettil. Before the match they felt Kettil had the advantage with the amount of card drawers, but Jorstedt had Overrun. This was only the second time they'd played against each other in a major tournament. Last time Kettil came out on top.

Jorstedt began beats with a Diligent Farmhand while Kettil's first play was a turn two Soulcatcher. Jorstedt cast end of turn Tainted Pact, turning over a Swamp then a Forest but managing to pick up a Rabid Elephant which he cast next turn. A Peek revealed Squirrel Nest, second Rabid Elephant and a Ghastly Demise.

"The play of the match," Kettil announced as he cast Kirtar's Desire on the Elephant and then following it with Standstill.

Jorstedt was forced to cast the second Elephant. This gave Kettil three cards. He summoned an Aven Flock and then enchanted it with Psionic Gift to nullify Jorstedt's Squirrel Nest. A Seton's Desire on the second Elephant provided a major offensive. Kettil was able to buy time by blocking and Sheltering a creature until he had enough plains to hold it off with the Aven Flock. Jorstedt hadn't really drawn any threats - recasting the Peek brought back with a Scrivener revealed Jorstedt had only managed to draw a Druid Lyrist - and Kettil continued to nibble away with the Soulcatcher. A second Kirtar's Desire provided a much better answer to the monster Elephant.

Jorstedt eventually made two Dirty Wererat and started throwing out a couple of one toughness monsters - cannon fodder to the Psionic Gift - and pitching land to head toward threshold.

A Concentrate put Kettil even more cards up and although Jorstedt used Morbid Hunger to get rid of the niggling Soulcatcher, Kettil drew another one. A Hallowed Healer meant Kettil was close to locking out the ground but not quite as Jorstedt hit threshold and started throwing a third Elephant and two Wererat into the red zone.

A Pulsating Illusion finally gave Jorstedt a creature worth using the Ghastly Demise on. The situation was bad for him as he had to leave the third Elephant back on defense. Kettil Repelled a Nantuko Disciple to "timewalk" Jorstedt as he was getting close to killing him. With the kill next turn Kettil turned three of Jorstedt's four swamps into islands in Jorstedt's upkeep. Jorstedt drew a swamp though and was able to flashback Morbid Hunger to stay alive. 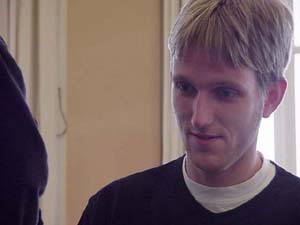 Jorstedt's creatures were forcing some damage through. At one point he could have won the game on a technicality as Kettil, in the middle of working out blockers, declared one creature as a blocker and then went to use his Cephalid Looter's ability before he'd decided how he was going to block with the others. Jorstedt didn't want to screw out a friend and didn't call him up on it.

Although an all-out attack from Jorstedt allowed him the opportunity to use Afflict to remove the Healer, he was unable to prevent Kettil from attacking for the win with the Flock and Soulcatcher next turn.

The second game was a lot shorter. Jorstedt started quickly with Lyrist, Crypt Creeper (traded with Kettil's turn two Soulcatcher), second Lyrist but then he didn't find a fourth land. Kettil stopped the Lyrists with a Blessed Orator and then went onto the offensive with Pianna, Nomad Captain. Seeing Jorstedt was mana-screwed Kettil cast a Scrivener with nothing for it to get back in an attempt to end the game quickly. A Peek revealed Jorstedt had a hand full of Morbid Hungers, Dirty Wererats and Rabid Elephants.

Jorstedt triple blocked Pianna with two Lyrists and a squirrel token but this wasn't enough to kill it as the Orator was in play. With such a poor mana draw Jorstedt couldn't really do anything anyway.