Round 10: Milton Figueroa vs. Michael Kuhman

Milton is a twenty-two year old sometime pro from Puerto Rico who now lives in Miami. He says that he currently loafing through life right now without a job. Mike Kuhman is a twenty-one year old amateur from Cocoa, Florida who says , "I think the DCI cancelled my rating because it was too low. I guess I'm due to lose." 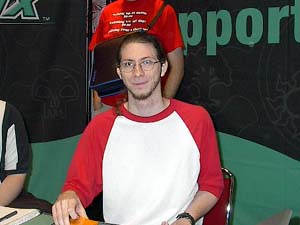 These two players are the last two undefeateds left in the tournament, and this Affinity versus Big Red matchup would leave only one player without a blemish on his record this weekend. This was the first Feature Match for both players, and was practically riddled with bad decisions and play mistakes. Kuhman ended up winning in the end, as both players seemed to try their hardest to give the opponent a match win.

Figueroa kept a hand he definitely should have mulliganed in game 1 and didn't draw an artifact land to go along with his two Blinkmoth Nexuses until turn 3 This gave Kuhman a chance to rev up third turn Slith Firewalker and add a twin a turn later. A handful of colored cards including two Thoughtcasts and a Night's Whisper rotted in Figueroa's hand, waiting for him to get enough artifacts on the board or the right color of mana to cast something. He nearly recovered, but Molten Rain on Seat of the Synod, plus Flamebreak and Pulse of the Forge finished the Affinity player before he ever got a chance to get going.

Game 2 was a very different story, as Kuhman domed himself for six damage with Flamebreaks, completely missing Figueroa's Somber Hoverguards with the spell. Figueroa just shrugged his shoulders, drew a bunch of cards from Thoughtcast, and laid beats on his way to a nearly flawless victory.

Game 3 marked the first contested game of the match, as Figueroa brought out the air force, beating Kuhman down with two Somber Hoverguards until they were blown from the sky by an Arc-Slogger. A land glut from the Affinity player slowed his recovery and lessened the pressure on Kuhman enough to let him win through Slog beatings and Pulse of the Forge, in spite of a series of misplays and inefficient mana usage. 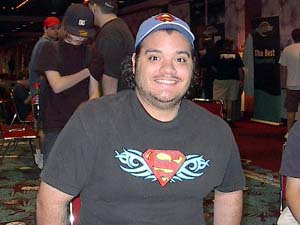 Figueroa: I kept my hand in game 1 because I didn't want to mulligan into a no-land hand, and then I literally didn't notice the Arcbound Ravager in my hand that I forgot to play until I passed the turn. What an awful game.

Kuhman: I just want everyone to know that I won that match in spite of playing horribly myself. My deck is the nuts, but I'm pretty lucky to stay undefeated this weekend.