Round 10: Nick Eisel vs. Joel Frank 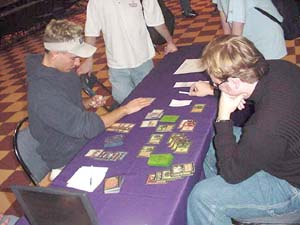 Two of the remaining three undefeated players squared off for the possibility of being the last undefeated player left at Grand Prix Philadelphia. Nick Eisel should be used to being undefeated: He's the number one limited player in the world on Magic Online. Obviously his play testing and skill there have reaped great rewards, as he faces off against Boston area player Joel Frank.

Joel played first, but didn't begin the beats with his red/green deck until turn three, where he finally got double Forest to summon Elvish Warrior. Nick countered with a morph creature, which was quickly shocked. It was Aphetto Alchemist.

Nick: "You got a real winner there."

Joel didn't really apply much pressure, as Nick went on the defense by casting Daru Cavalier, and using it to search out a brother-in-arms. The two first strikers went on the defense against the Elvish Warrior. When they double blocked, Joel was ready with Tribal Unity which pumped his Elf to a beefy 5/6. The soldiers both went quickly to the graveyard.

Nick went straight back on the d with Daru Lancer, so Joel one upped him with Krosan Groundshaker. With a smile, Nick played the bomb of his deck the following turn: Exalted Angel. Joel shook his head in dismay, but rededicated himself to the life total race with a second Groundbreaker. The race was on, as Nick played Aven Fateshaper the following turn, putting Improvised Armor and Renewed Faith to the top of his deck. His angel brought the game to 16-14 in favor of Frank, but his plan was clear: Armor up the Angel and race.

Joel went on the offense, one of his two Groundshakers trading with the bird wizard during a gang block. This brought Nick to eight, as Joel cast Symbiotic Elf and Taunting Elf, giving him ten points of unblockable damage the following turn. The Armor, of course, went straight on the Angel to bring Nick back up to a more comfortable fourteen life, to Joel's ten. 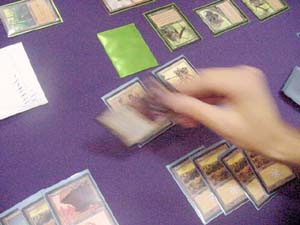 The momentum of the game shifted completely as the Boston player's next attack met with a cycled Slice and Dice, killing the Elf with the built in Lure. Free to block the Warrior, Nick took only eight damage, and his Angel put him right back ahead. Renewed Faith, hard cast, gave him an extra six life. With the life totals 18-4 in favor of the younger Eisel, Frank swung again, his Symbiotic Elves both dying a horrible death. Although Joel held on one turn longer with a chump blocking Spitting Gourna, it could only delay the Armored Angel, not contain it.

Somberly, the two players shuffled up for Game 2. Joel intermittently shook his head, presumably at how the Angel had single-handedly won the game for Nick. He chose to play first. Nick, however, led off the game with a morpher and a Daru Cavalier, while the older Joel played a seemingly ineffectual pair of Symbiotic Elves.

Neither player seemed willing to attack, with Nick adding Daunting Defender and Joel opting to go the life gaining route via a freshly summoned Wellwisher. Finally Eisel went on the offense, unmorphing his Ascending Aven and swinging with both it and one of his Cavaliers. Joel opted not to block, knocking out a quarter of his life total. Nick then played an unmorphed Daru Healer, unmorphed so it could take advantage of the Defender's ability.

Joel finally got an offensive critter (Elvish Riders), which also brought his elf count up to four for the Wellwisher. Nick went nuts on his next turn, playing Aven Brigadier. Not only did this give him a 3/5 flyer, but it pumped his Cavalier to a 3/3 first striker, and made his Ascending Aven into a truly monstrous 5/4 beater.

In desperation, Joel attacked with his Riders. Nick opted not to block, preventing a point to himself with the Healer. Joel cycled a Krosan Tusker to go get a second Mountain, which allowed him to drop an entire mountain on the Ascending Aven with Pinpoint Avalanche. 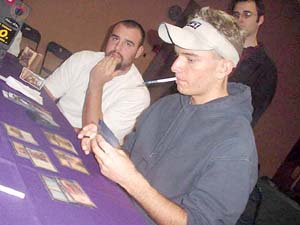 Nick's deck was pure momentum the whole way, with Essence Fracture undoing both of Joel's remaining blockers (the Symbiotic Elves), allowing him to swing for ten. Both of them came back down the next turn, so Wellwisher could bring Joel back from two life to six. Nick's next attack really seemed hopeless for Joel. Here's why:

Nick still had the Daru Healer to prevent damage. Joel couldn't block the Brigadier, so he'd automatically be taking three this combat. He needed to block both of the other creatures, because either one would deal fatal damage. This meant that Frank could block each of the attackers with at most two creatures, since he couldn't let any of them through. If he blocked the Cavalier with two creatures, one would be first struck to death and the other wouldn't have enough damage to kill the Cavalier back. If he blocked the Defender with two creatures, they would only deal at most three damage to the Cleric (since each creature would deal one less damage due to the Cleric's ability) and the Healer would ensure the Defender stayed alive.

Faced with a lose/lose situation, Frank opted to block each of the ground pounders with a Symbiotic Elf. Nick simply cycled Slice and Dice after combat, taking out every creature on Joel's board except for Elvish Rider. Frank extended his hand, and the two players wished each other luck for the next round.

1 Crown of Awe 1 Righteous Cause