Round 10: Nicolai Herzog vs. Frederic Courtois

Courtois won the dice roll and decided to play and keep his initial hand. The Frenchman started with a couple of small creatures but Herzog broke the situation open with a turn three Canopy Crawler amplified by three beasts. 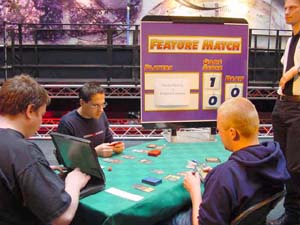 Courtois played a Vengeful Dead but couldn't stop the Crawler coming through for five damage, although next turn he decided to chump with his face down Sootfeather Flock. The large beast had been joined by a Berserk Murlodont and Chartooth Cougar. Courtois got stuck on four land and was forced to play two chump blockers but Herzog merely cycled Krosan Tusker for a Mountain and played a morphed Skirk Volcanist which he sacced two mountains to unmorph and kill sufficient blockers for fatal damage to get through.

Once again Courtois decided to start hoping that this time Herzog doesn't manage quite such a dynamite draw. Courtois made a quick decision to keep but Herzog thought long and hard before "OK, we'll give it a go."

Courtois had a morph on the table turn three which he unmorphed to show a Haunted Cadaver to make Herzog discard three. When the Norwegian discarded three Forests we found out that he had kept a six land hand meaning Courtois got very little advantage from sacrificing his creature. Herzog produced a Canopy Crawler amplified by two beasts and Courtois responded by Unburdening the Norwegian of two more cards. The Crawler started attacking and was then joined by a morph. Both players were on 16 and things looked fairly even. Courtois drew and cast Rush of Knowledge for four cards which gave him all the card advantage he needed. Herzog forestcycled a Wirewood Guardian before combat and attacked with the Canopy Crawler and a morph. Courtois blocked the Crawler with a Shepherd of Rot and allowed the morph through. 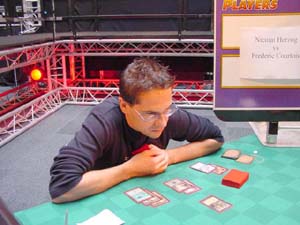 Courtois summoned Embalmed Brawler and cast the new Abyss enchantment (Call to the Grave), which looked very strong as he had nothing but zombies on the table. Herzog had to make the first sacrifice and his morph creature, a Serpentine Basilisk, bit the dust. He seemed to have decided that aggro is the way to go as he attacked with both his creatures and got through four damage. Courtois seemed content to chump block with one creature to prevent the damage and let the enchantment put paid to the beasts on the table over a couple of turns. He spent a lot of time during his turn doing calculations before attacking with an Embalmed Brawler and Carrion Feeder and then cast Noxious Ghoul and enchanted it with Dragon Shadow.

Herzog untapped and decides to sacrifice his Snarling Undorak leaving just the Canopy Crawler. He then summoned a Bonethorn Valesk face up as he needed some defense. Courtois attacked for four with his fear Ghoul and summoned a Covert Operative. Herzog had only six life and things looked very grim when he couldn't cast a creature. Courtois once again took his time calculating but just said "Go" to dispose of the Canopy Crawler and leave Herzog with no defense. The Norwegian couldn't find a creature to provide any defense and Courtois had more than enough damage on the table to kill him next turn.

Both players sideboarded before Game 3 and Herzog decided to play but an initial mulligan made that choice seem questionable. He kept his six card hand but then the Frenchman decided to mulligan and it all seemed even again. 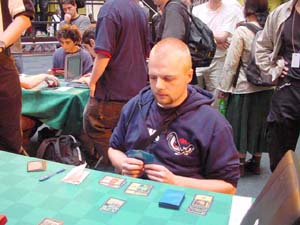 The first action appeared on Herzog's turn four when a Wirewood Elf made an appearance suggesting a hand full of large spells. Courtois had a turn four morph and Herzog answered with a Needleshot Gourna. Covert Operative from Courtois signaled the start of a damage race but as both players were still on twenty life there was a little time to go. Herzog drew first blood with a Gourna attack and then he brought a couple of morphs to the party. Courtois enchanted a morph of his own with Dragon Shadow and now had six unblockable damage per turn. Herzog had big creatures though and on the next turn he tapped out to hard cast a Krosan Tusker before combat then he attacked with the Gourna and two morphs. To nobodies surprise one of the morphs turned out to be a Skirk Volcanist which was unmorphed to dispose of the enchanted morph and another morph creature.

A six casting cost Gempalm Polluter from Courtois returned the Dragon Shadow from the graveyard but the large creature was needed to block and kill the Krosan Tusker which attacked the next turn. Herzog was now on four life against Courtois' five but the Frenchman could only muster three damage with the one creature he had left (Covert Operative) so he cast a Vengeful Dead and passed the turn. Herzog however had the Scattershot he needed to dispose of one of his opponents blockers which drew an immediate handshake from Courtois.