Round 10: Nicolas Labarre vs. Gabriel Nassif 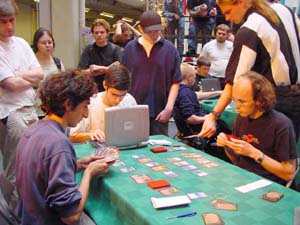 Two Frenchmen at the top of tables, nothing new when it comes to European Magic. We already had Nassif up here a few rounds ago. Labarre you might remember as the ultimate metagamer at Pro Tour Academy (well, you could call it Pro Tour Rome) in 1997 driving his Merfolk deck all the way to the finals before losing to Hovi, in a true sea of Academy decks.

More recently you might want to credit him with stopping Kai Budde. When Kai went on his Pro Tour winning rampage, Labarre was the player that eventually stopped him with an epic finals at Grand Prix Biarritz.

Nicolas started with Catapult Squad and the obligatory morph before Nassif played his morph. Labarre played Mistform Wall and Nassif howled when he found his "crucial" Sparksmith.

Labarre's Blue-White deck would have a lot of trouble dealing with the annoying Goblin so he focused on attacking to make sure Nassif would have as few life points as possible to work with.

The Squad was the first to bite the dust, but Nicolas Labarre replaced it with two extra creatures. At eleven Nassif had a lot of room for the Sparksmith if he could find some blockers to slow things down.

He found Frozen Solid to lock the Kite but Nicolas had Wipe Clean to free it. Down to five went Gabriel, his Sparksmith now almost useless. He unmorphed Skirk Marauder to kill the Kite forcing Nicolas to find another attack plan.

Apparently he had no way to push through at that point and was forced to pass the turn back to Nassif. Seizing the opportunity the younger player dropped Arcanis, the perfect way to find answers.

Labarre unmorphed Echo Tracer to bounce the Sparksmith but could do nothing permanent to Arcanis. What he could do was play another unstoppable creature: Covert Operative.

Nassif's Arcanis dug for help and produced Day of the Dragons. In came five – count them – five Dragons. Unfazed Nicolas Labarre sent in the Operative, dropping Nassif to two and used Temporal Fissure to bounce the enchantment. 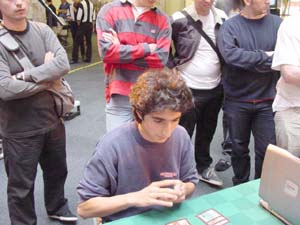 Again Arcanis demanded help. Again his call was answered. Up came Frozen Solid. The Operative was locked. Labarre tried another plan: Aven Fateshaper.
That problem wasn't as urgent because Nassif had Mistform Dreamer to chump. He used Arcanis once again and replayed Day of the Dragons. This time he had SEVEN dragons. As usual Labarre didn't even react. He drew his card, stared at his hand and... conceded.

His work certainly didn't start well: he had to mulligan. He still came out faster with turn three morph. They messed around with morphs for a while, trading blows until Nassif played Dragonspeaker Shaman to power out turn five Imperial Hellkite. Nicolas started whistling. 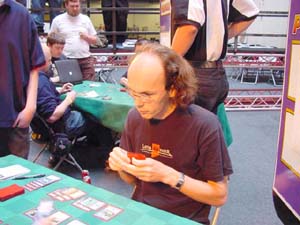 He delayed the problem with Temporal Fissure and sent his crew in. Afraid of falling to seven life Nassif blocked a morph with his Shaman. On the following turn he used Frozen Solid on Warped Researcher and used Skirk Commando to kill the remaining morph.

Now Labarre was in real trouble Not only was the Hellkite one land away from returning but he had no army on the table. Unable to find his seventh land, Gabriel Nassif simply played Flamestick Courier and Goblin Clearcutter..

Nicolas found an answer to Frozen Solid in the unlikely shape of the "Morphling" enchantment. The Researcher flew over for six damage, dropping Nassif to a mere three.

He failed to find his seventh land, so no Dragon would come to the rescue. He needed some way to stop the Researcher... He attacked, started at his hand and conceded. Despite a turn five Hellkite, Gabriel couldn't take the game.

Labarre opened with turn two Catapult Squad and Nassif blocked it with a morph. He only had three Islands as lands and the morph was Imperial Hellkite. Despite much head shaking there was nothing he could do to escape the color screw.

Nicolas tried to take the game as quickly as possible as Gabriel Nassif drew another two Islands. Gabriel battled when he could but there was nothing he could do.